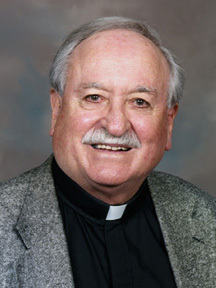 The Rev. J. William “Bill” Daum, rector emeritus of Church of the Transfiguration, Arcadia, died on Aug. 25 in Castro Valley, California, where he had lived for the past several years. He was 84, and had been in poor health for some time.

Services will be held at Church of the Transfiguration, 1881 S. First Avenue, Arcadia, at 2 p.m. on Saturday, September 4. The Rt. Rev. Chester L. Talton, retired bishop suffragan, will preside; the Rev. Julie D. Bryant, rector of Transfiguration will officiate; and Rev. Susan L. Scranton, rector of Grace Church, Glendora, will be guest celebrant and preacher. A reception will follow in the parish hall.

In lieu of flowers, the family suggests that donations be made to Church of the Transfiguration, which has established a memorial fund in Daum’s name.

Daum served the Church of the Transfiguration as rector for 32 years, one of the longest tenures recorded in the Diocese of Los Angeles. During his time there, the congregation grew considerably and developed an exceptionally fine music program. Daum once said that he upset some parishioners — and gained others — when he flew to Montgomery, Alabama, in the 1960s to join with fellow clergy and the Rev. Dr. Martin Luther King Jr. in a civil rights march.

In the 1970s, Daum and his family spent a year in England in an exchange program with a vicar in Redmarshall Parish, Stockton-on-Tees (Diocese of Durham). Another touchstone event in his life was a six-week continuing education program at Virginia Theological Seminary.

When The Episcopal News asked him at the time of his 1994 retirement which of his talents had served him best as rector, Daum replied without hesitation, “Reconciliation. We have held together very conservative and very liberal factions over a long time. If I have a strength at all, it’s in reconciling, or at least in hearing all sides, and not being an idealogue.” The only issue on which he took an uncompromising stand, he said, was racism.

He previously served for several years as curate at St. Thomas of Canterbury Church, Long Beach.

Daum was born October 16, 1925, in Tuscon, Arizona. He enlisted in the Navy after high school, and was placed on reserve status after basic training and flight school. After he graduated from the University of Arizona, where he was captain of the track team, he began medical school, but soon discerned a call to ministry.

Raised a Baptist, Daum earned a master of divinity degree at Denver Seminary, then moved to California to be a student chaplain at UCLA and USC. He was drawn to the Episcopal Church’s liturgy and openness, and studied for a year at CDSP before being ordained an Episcopal deacon in June 1959 and a priest in February 1960 by Bishop F. Eric Bloy.