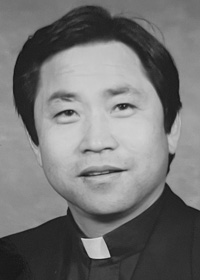 The Rev. Canon Jonathan Won, retired vicar of St. Francis’ Church, Norwalk, and one of the first Korean priests to serve in the Diocese of Los Angeles, died March 25 in Portland, Oregon, after a long illness. He was 82.

Survivors include his wife of 49 years, Gemma Yong Ja Kim; his daughter, Josephine, and her husband, and his son, Joseph; and three grandchildren. A memorial service will be held on April 10 in Portland with Bishop Paul Yoon presiding; it will be family only due to pandemic restrictions. Additional services are pending.

Won was rector of All Saints Korean Episcopal Church, Bergenfield, New Jersey, from 2000 to 2006, and was canonically resident in the Diocese of Newark. Before his service at St. Francis’ Church in Norwalk, he was vicar of Church of the Annunciation, Anaheim, from 1987 to 1989; the congregation later merged with St. Anselm’s Church, Garden Grove. He had previously been vicar at St. Peter’s Church, Bogota, New Jersey (1981 – 1987).

Jonathan Won was born Aug. 25, 1938 in Pochon Kyunggi Do, Korea, and earned a bachelor’s degree at Yonsei University. He received his theological education at Episcopal Divinity School, Cambridge, Mass., and St. Michael’s Seminary in Korea. He also studied at Concordia University in Montreal, Canada.

He was ordained in 1974 in the Diocese of Taejon, Anglican Church of Korea, where he served as a parish priest and diocesan staff member until 1981, when he transferred to The Episcopal Church. Bishop Frederick H. Borsch named him a canon of the Cathedral Center in 1998.