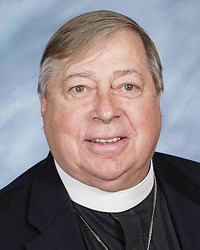 The Rev. Joseph William Frazier, vicar of St. Columba’s Episcopal Church in Big Bear Lake and member of the Chad Mitchell Trio, died in his sleep the morning of March 28. He was 77 and had been in ill health for some months.

A memorial Eucharist will be held on Saturday, April 26 at St. Cross Church, 1818 Monterey Blvd, Hermosa Beach 90254 (310.376.8989), at 2 p.m. (Clergy: White cassock/surplice, white stole. Carpooling is strongly encouraged.) Burial will be at St. Columba’s the following day, in a private service for family and parishioners.

Before his ordained ministry, Frazier was a folksinger and actor. He became a member of the Chad Mitchell Trio in the 1960s after one of its original singers left the group. The Mitchell Trio released many popular songs and appeared often on television, but they added a satirical edge to their folk harmonies with songs that took aim at the Vietnam War, celebrity culture and segregationist policies. Frazier later was to say that his most distinctive contribution to the group was this emphasis on political and social content. For a time, the trio also featured the young singer/songwriter John Denver, with whom Frazier maintained a close friendship until Denver’s death in 1997.

Joseph Frazier was born January 14, 1937 in Lebanon, Pennsylvania. He enlisted in the U.S. Air Force (‘”to get the G.I bill,” he said) but found himself imprisoned and questioned by the FBI as a security risk because of his political opinions. “Apparently reading the ‘wrong books,’ listening to Pete Seeger, and talking about it were frowned upon,” he remarked in his autobiography on the Chad Mitchell Trio website. He was offered an honorable discharge, however, and went on to attend Lebanon Valley College, where he met his future wife Charlotte when they performed together in plays. The couple was married in New York City a year after they left the college. The marriage later ended in divorce. 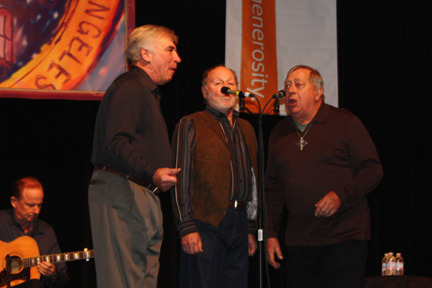 Joe Frazier and the Chad Mitchell Trio perform at the Diocese of Los Angeles’ annual convention in 2009 – the group’s 50th year together. Photo: Janet Kawamoto

After six years with the Chad Mitchell Trio — “getting the musical thing out of the way,” as he told The Episcopal News in 1991 — Frazier earned a degree at Yale Divinity School. He was ordained to the diaconate on June 6, 1972 and to the priesthood on January 13, 1973. After his first cure, he spent a year with a monastic order, the Society of St. John the Evangelist in Cambridge, Massachusetts, before taking a position at the Cathedral of St. John in Wilmington, Delaware.

Frazier never quite got the musical thing out of the way. Before and during his tenure at St. Andrew’s, Torrance, he was part of a singing group called Eskaton. He also reunited with some of the former members of the Mitchell Trio, including Denver, for a PBS-broadcast concert in 1987. Frazier came together with original trio members Chad Mitchell and Mike Kobluk to perform a number of times in recent decades, including a benefit for the Presiding Bishop’s Fund for World Relief (now Episcopal Relief & Development) in 1979. They concluded a 50th anniversary tour in 2009 with a performance at Diocesan Convention and a benefit concert at St. Columba’s.

A recording of Frazier singing “The Last Thing On My Mind” is here.