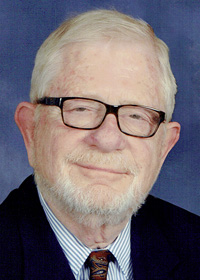 Lamar Mott Hill, professor of history at UC Irvine from 1968 to 2007 and active parishioner in four Southland congregations, died Sept. 2 in Corona del Mar at age 83. At his side was his wife, the Rev. Ellen R. Hill, an active assisting priest of the Diocese of Los Angeles who served from 1993 to 2003 as rector of St. Michael and All Angels, Studio City.

A memorial service will be held at St. James Episcopal Church, 3209 Via Lido, Newport Beach, on Saturday, Oct. 23 at 10 a.m., with a reception immediately following the service.

Survivors also include the Hills’ daughter, Anne Hill of Portland, Oregon, and son, Andy Hill (Meredith Fisk), of Newport Beach, and grandchildren Thomas and Matthias Junker and Hayden and Brycen Hill, as well as many cousins, nieces, nephews, and friends.

Hill shared in lay ministry at St. Michael and All Angels, Corona del Mar, and Church of the Messiah, Santa Ana; in addition to the Studio City and Newport Beach congregations.

Born in New York City on Feb. 23, 1938, Hill was the only child of his parents, Edith (Mott) Hill and Thomas Cobb Hill, who raised him in Greenwich Village. Lamar attended Grace Church School for elementary and middle school, where he was a choir boy.

He attended Kenyon College, in Gambier, Ohio graduating in 1960. He later attended law school at Cornell University but changed direction to study English history. He received his master’s at Case Western Reserve University, Cleveland, Ohio; and his Ph.D. from the University of London, England, in 1968.

In 1960, Hill married Ellen Ratkovich, and the couple resided in Ithaca, N.Y.; Cleveland, Ohio; and London, England before moving to Irvine in 1968 when Hill began his 39-year teaching career at UCI.

Hill is known for his love for people, music, his faith, family dinners and vacations, and Angels baseball. He loved his four grandsons, and was always eager to hear about their baseball, soccer and rowing adventures.