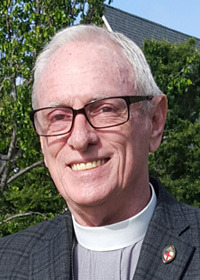 Harris, a ten-year cancer survivor, had been recently diagnosed with a recurrence of the disease. He was born in Pasadena on June 23, 1948 and graduated from Pasadena High School, according to his daughter, Stephanie Landrum. After attending the University of California at San Diego and Cal State Berkeley, he earned an undergraduate degree in business, she said. His early career was spent in retail and hanging wallpaper.

He joined St. Mark’s in the 1980s as a parishioner, and because immersed in the life of the church. He was a Dodger fan, a member of the church choir and bell choir, and ran the Relay for Life to raise awareness about cancer. He also trained acolytes and taught religious courses at the school. His great love was coaching the school’s debate team and leading them to many championships, his daughter said.

He was ordained a vocational deacon Feb. 4, 2010 during a school Eucharist by Bishop Suffragan Chester Talton, the day before another debate tournament. He visited Haiti the past two years as part of St. Mark’s partnership with St. Andre’s in Trianon, Haiti.

In addition to his daughter, survivors include a son, Nicholas (Kathryn) Harris, a son-in-law, Joe Landrum, and four grandchildren.