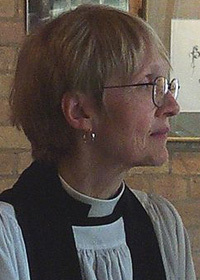 The Rev. Marilyn McCord Adams — priest, scholar of philosophy of religion, philosophical theology and medieval philosophy, and a beloved inspiration and mentor to many — died March 22 of cancer. She was 73.

Services are pending. Survivors include her husband, Robert Merrihew Adams, to whom she was married in 1966.

She was a former president of the Society for Medieval and Renaissance Philosophy, was elected a fellow of the American Academy of Arts & Sciences in 2015, and was a recipient of the Henry Luce Fellowship in 2002 and a Gugghenheim Fellowship in 1988. She was a Gifford Lecturer in 1998 -1999 at the University of St. Andrews (Scotland), speaking on “Christ and Horrors: The Coherence of Christology,” and published a book of the same title, based on those lectures, in 2006.

Her other books included Horrendous Evils and the Goodness of God (1999); Some Later Medieval Theories of the Eucharist: Thomas Aquinas, Giles of Rome, Duns Scotus, and William Ockham (2010); and the two-volume William of Ockham. She also wrote many articles, including “Is the Existence of God a ‘Hard’ Fact?” in The Philosophical Review (October 1967). She and her husband were editors of The Problem of Evil (1990).

Marilyn McCord was born October 12, 1943 in Oak Park, Illinois, daughter of William Clark McCord and Wilmah Brown McCord. She earned a bachelor’s degree from the University of Illinois, two master’s degrees from Princeton Theological Seminary and a doctorate from Cornell University. She was ordained to the diaconate in the Diocese of Los Angeles by Bishop Oliver B. Garver on June 20, 1987 and to the priesthood on Dec. 1, 1987 by Bishop John Krumm.