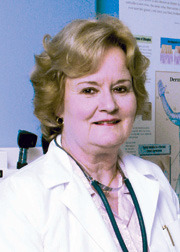 Dr. Marlene M. Coleman Huss, a physician, author, and board member of the Canterbury Episcopal chaplaincy at the University of Southern California, died January 26, 2009, two months after the death of her husband, the late Judge William Huss.

A board-certified pediatrician in private practice in Newport Beach for more than 25 years, Marlene Huss specialized in adolescent medicine with a sub-specialty in travel medicine. In 2004, she was honored as one of the Top Pediatricians in America.

Huss was Associate Clinical Professor of Family Medicine at the Keck School of Medicine at the University of Southern California (USC), where for more than 15 years she taught the course “Introduction to Clinical Medicine” to freshman students.

She was also an attending physician at the California Institute of Technology (CalTech), where she focused on student health, particularly during international travel.

A native Southern Californian, Huss received her M.D. degree from the University of California at Irvine School of Medicine.

She served on the board of trustees and quality review board for the Cooperative of American Physicians/Mutual Protection Trust, an organization specializing in medical malpractice.

As a captain in the U.S. Naval Reserve Medical Corps, Huss served in Washington, D.C. at the Navy Annex to the Pentagon.

Huss was the author of several books including Start Your Own Medical Practice, Safe and Sound, Healthy Travel with Children, and was coauthor with her late husband of Homeowners Associations and You: The Ultimate Guide to Harmonious Community Living.

Huss served for many years on the diocesan Program Group for Ministry in Higher Education and was an elected board member of Canterbury USC. With her husband, she was a lay leader and member of the Cathedral Center Congregation in Echo Park.

Huss’s husband, Judge William Huss, who died November 26, 2008, was a vice chancellor of the Diocese of Los Angeles and honorary canon of the Cathedral Center. Survivors include the adult Huss children; Charlynn D’Anconia, Matthew and Damon, and their families.