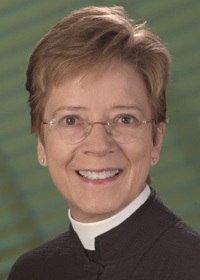 DeChamplain’s husband, Ronald DeChamplain, to whom she was married in 1983, died in 2005. Survivors include her brother, Scott, and her stepchildren Jeff (Calu) DeChamplain, Laurel (Kurt) Plankenhorn, and Chantel (Randall) Gershon; and two grandchildren.

DeChamplain was born in Pasadena, California. After receiving bachelor of science and master of arts degrees in Communication Studies from Northwestern University, she earned her doctorate in communications from the University of Southern California in 1987.

She was ordained to the diaconate in 1995 and to the priesthood in 1996 by Bishop Frederick H. Borsch, and remained canonically resident in the Diocese of Los Angeles for the rest of her life. She taught homiletics at Fuller Theological Seminary before moving to New York in 1998 to become Trinity Church Professor of Preaching at GTS.

She was active as a priest and preacher throughout New York City. From 2007 to 2014, she served as vicar at St. Clement’s Episcopal Church. After the terrorist attacks on Sept. 11, 2001, she volunteered as a chaplain at Ground Zero, which GTS cited when awarding her the Clement Clarke Moore Medal on May 10, 2016.

Memorial gifts may be made to the following: