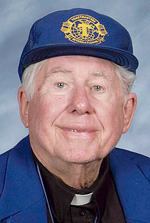 The Rev. Norman Herriman Boyd, most recently assistant at St. Peter’s Church, San Pedro, died peacefully in his sleep on Nov. 24. He was 87.

Services were held on Dec. 15 at St. Peter’s Church.

Boyd had served at St. Peter’s in various capacities since 1983. He was a non-parochial priest for much of his ministry, but served at various times at St. Luke’s Church, Monrovia; St. Ambrose’s Church, Claremont; Church of the Ascension, Sierra Madre; St. Martha’s Church, West Covina; and St. Edmund’s Church, San Marino. He also served at congregations in northern and central California in the late 1950s and early 1960s.

Norman Boyd was born in San Diego on June 29, 1926. He earned a bachelor’s degree at the University of California in 1951 and a master of divinity degree at CDSP in 1956. He also attended St. Augustine College in 1956. He was ordained a deacon in December of 1955 and a priest the following June.