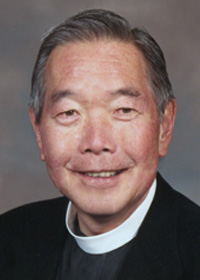 Before being called as rector in 1973, he served St. Alban’s as deacon, then assistant priest beginning just after his graduation from seminary in 1967. After his retirement he was interim rector at St. Mary’s Church, Laguna Beach, and assisted at Christ Church, Redondo Beach.

Ishizaki was born in Sacramento, California, on Oct. 27, 1939. His father, an immigrant from Japan, owned a jewelry store that was frequented by members of the Japanese-American community. In the wake of Japan’s 1941 attack on Pearl Harbor, the U.S. government accused the elder Ishizaki of being a spy, and sent him and his family to an internment camp. After the war the family moved to Rockford, Illinois, where Norman attended public schools. After two years at the University of Wisconsin in Madison, Wisconsin, he transferred to the University of California at Los Angeles where he completed a bachelor’s degree in psychology in 1962.  After a year as a social worker for Los Angeles County’s Aid to Dependent Children program, he entered Seabury-Western Theological Seminary, graduating with a master of divinity degree in 1967. Upon graduation he joined the staff at St. Alban’s Church. Bishop Francis Eric Bloy ordained him to the diaconate on September 9, 1967 and to the priesthood on March 9, 1968.

Under his leadership, St. Alban’s sponsored two refugee families from Vietnam, helping them resettle and become independent. In 1989 the congregations of St. Alban’s and Stephen S. Wise Temple formed the Wise Saints Corporation and worked together to rehabilitate two hotels on skid row, now used for low income housing.​ St. Alban’s also developed an outstanding parish choir program under the leadership of Canon James Vail. The parish vestry named Ishizaki rector emeritus upon his retirement in 2002.

Ishizaki was a member of the editorial board of The Episcopal News for many years, drawing on his experience as a writer for student newspapers at UCLA.