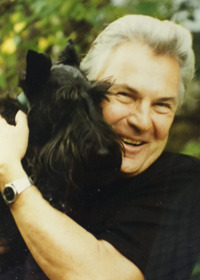 Besides Jane, Parks’ wife of nearly 59 years, survivors include a sister, four children, and five grandchildren. A private family service will be held. In lieu of flowers, the family asks for donations in his memory to the Lady Bird Johnson National Wild Flower Foundation, Washington National Cathedral and Boys Republic.

Parks served St. George’s beginning in 1963. During his 28-year tenure as vicar, the parish held a successful capital campaign to improve its facilities, including the converted Army barracks that served as the church. Under Ralph’s leadership, the congregation built a cloister, refurbished the chapel, parish hall, rector and gardens. Finally, they built the present church and bell tower, which were dedicated with Bishop Francis Eric Bloy and Bishop Robert C. Rusack in attendance. The finishing touches to the restoration project included the installation of faceted glass windows from the Judson Studios in Los Angeles and finally a pipe organ built by celebrated organ builder Robert M. Turner. At one time, former Presiding Bishop John Allin visited the congregation as Ralph’s guest.

Parks was born March 13, 1933 in Carmichael, California, and raised on a farm during the Depression and World War II. He attended Stanford University, where he gave tours of Memorial Church and Hoover Tower and worked in the dining hall.

After graduating with a master of divinity degree from Church Divinity School of the Pacific in 1958, Parks became pastor of Port Hueneme Presbyterian Church. In 1963, Bishop Bloy invited him to become vicar of St. George’s, where his wife Jane served as organist and choir director. Parks retired in 1991 “to spend time traveling, indulging in the Sunday morning political talk shows, spending time in his garden, with particular fondness for growing roses and maintaining an orchid house, and taking daily walks with his beloved Scottish terrier, Fala,” according to his son, Andrew Parks. “He was a founding member of the Lady Bird Johnson National Wildflower Foundation, enjoying a personal relationship with Mrs. Johnson until she passed.” An avid reader, he preferred political memoirs and historical novels. He also enjoyed musical theater.