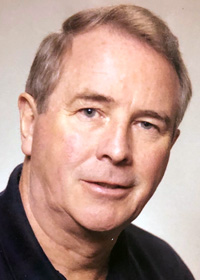 The Rev. Canon Robin Underhill, priest of the Diocese of Los Angeles and former port chaplain of the Seamen’s Church Institute of Los Angeles (now closed) died April 28 in Scotland after a long illness. He was 88.

Survivors include his daughter, Elizabeth Jones, and stepdaughters Katy and Meghan; grandchildren Andres, Natalie, Kelly and Matthew; and great-granddaughter Kayla. His wife, Evelyn Underhill, who was an active member of St. Nicholas’ Church, Encino, and a member of the diocesan Episcopal Church Women’s board during their residence in the Diocese of Los Angeles, died in 2010.

Robin Underhill was born May 10, 1931 in Birmingham, England. He moved with his family to Chicago in 1948; there he attended Northwestern University and began a career in shipping and tourism. He moved to Los Angeles, where he graduated with a bachelor’s degree from Woodbury University, and earned three degrees from Bloy House (Episcopal Theological School at Claremont). Bishop Suffragan Chester Talton ordained him to the diaconate in 1993; Bishop Frederick Borsch ordained him to the priesthood in 1994.

He served for two years as a pastoral assistant at All Saints’ Church, Beverly Hills and during that time began his long ministry to seafarers. In 1993 Underhill was appointed a port chaplain with the Seamen’s Church Institute in San Pedro, where he served until his retirement in 1998.

Underhill was interim minister at St. Simon’s Church in San Fernando for two years until he moved in 2001 to Scotland, where he resumed his work with seafarers under the Scottish Episcopal Church, helping to establish sailors’ ministries in ports throughout the land where none had existed since World War II. He was appointed an honorary canon of St. Andrew’s Cathedral, Aberdeen, in recognition of his efforts.