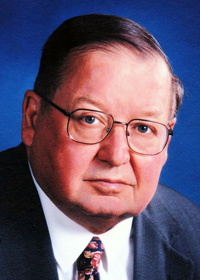 Canon William B. Rodiger, who for more than 30 years served the Diocese of Los Angeles as a vice-chancellor and as a four-time deputy to General Convention, died May 22 after recent months of illness. He was 95 and resided in Santa Ana.

“Canon Rodiger’s incisive counsel and winsome manner were gifts to the Diocese of Los Angeles especially during deliberations on complex issues,” said Bishop John Harvey Taylor, who worked with Rodiger on the diocesan Committee on Constitution and Canons. “We in the diocesan community will long appreciate his contributions, and we extend condolences to his beloved Harriet, whose gifts to her church have also been prodigious, and all who mourn and celebrate Bill.”

Rodiger was a parishioner of All Saints Church in Pasadena where he completed several terms on the vestry, including as senior warden. Diocesan Convention elected Rodiger a deputy to General Convention for its meetings in Detroit in 1998, Phoenix in 1991, Indianapolis in 1994, and Philadelphia where in 1997 he chaired the Los Angeles deputation. In appreciation for Rodiger’s many contributions to diocesan life, Bishop Frederick H. Borsch in 1993 named him an honorary canon of the Cathedral Center of St. Paul.

Rodiger was born Aug. 8, 1924 in Chippewa Falls, Wisconsin, the son of Idella and Eckhardt Rodiger. He graduated from UW-Madison, served in the Army in WWII, received his law degree from Harvard in 1948. He started his law career with the firm of Parker Stanbury in Los Angeles and later formed the firm that eventually became Kinkle, Rodiger and Spriggs with offices in L.A., Santa Ana, Riverside, Ventura, and San Diego. In the 1960s and ’70s he was active on the boards of The Pasadena Symphony and the Pasadena Planning Commission.

He is survived by his wife of 37 years Harriet (McNary), four children from his previous marriage, and six grandchildren.

Private services will be held later in the summer at All Saints, Pasadena.