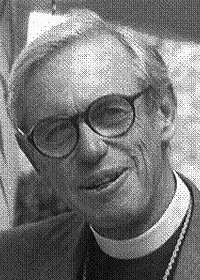 He is survived by five children — Leigh, Nina, Catherine, Robert and Eve — and several grandchildren.

Cornelison was called as rector of St. Mary’s in 1968, and served there until his retirement in 1988. Through his leadership St. Mary’s became a beacon of care and compassion to the entire Laguna Beach community. With the parish, Cornelison helped found the Laguna Beach Free Clinic (now the Laguna Beach Community Clinic); Human Options, a comprehensive program for abused women; Laguna Outreach for gay and lesbian residents; Sally’s Fund, which provides services for senior citizens; and Vista Aliso, a senior housing complex and community center.

Brad Karelius, who served as assistant rector at St. Mary’s beginning in 1970, remembers that Cornelison caused some controversy with his new style of ministry. “Two months after I arrived, the church was packed and there was the tension of conflict,” Karelius writes. “Bob was being criticized for his innovative ministry with young people on drugs (children of the wealthy families in Emerald Bay) and his ministry with hippies and the homeless. The rectors before him were the traditional old-school, spent the day in their office, waiting for walk-ins or occasional hospital visits. Bob was the new avant garde, taking ministry to the streets. But the old guard of the parish wanted his head. Many community people stood up and testified to Bob’s ministry of compassion. That turned the tide.”

Cornelison was also for many years chair of the Program Group on Camping, and was a tireless advocate for Camp Stevens. Under his leadership the camp expanded its program to include sessions for families and conference facilities for large and small groups, in addition to the traditional summer sessions. He served on many other diocesan boards and committees during his long ministry.

He was also a licensed therapist, specializing in drug abuse and marriage and family issues. He also served as a chaplain at South Coast Medical Center in Laguna Beach.

Robert Cornelison was born on January 21, 1928 in Los Angeles. He served in the U.S. Army as a staff sergeant before earning a bachelor’s degree in sociology at the University of California at Los Angeles in 1953, followed by a master of divinity degree at Church Divinity School of the Pacific. He received a Ph.D. from the Institute of Advanced Studies in 1999. He was ordained to the diaconate in June 1956 and to the priesthood in February 1957 by Francis Eric Bloy, third Bishop of Los Angeles.