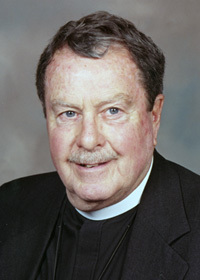 The Rev. Canon Roger Hoffman Wood, former rector of Church of the Epiphany, Los Angeles, and former chaplain at The Episcopal Home, died June 14 at his home in Sierra Madre. He was 93.

A service will be held on Wednesday, June 21, 10 a.m. at Church of the Ascension, Sierra Madre, where Roger was a member in his childhood and to which he returned as an assistant after retirement.

Survivors include a niece, Allison Wood Box, and a nephew, Steve Wood, and his family.

Roger Wood was born in Pasadena and was baptized at Church of the Ascension, where he had a strong family legacy; his family had donated the land on which the church stands. He served in the U.S. Navy during World War II, then earned a bachelor’s degree at Stanford University in 1948. He also earned a law degree from Stanford, and became a member of the California state bar. He worked in Sacramento for the state legislature’s legal bureau, where his colleagues included future U.S. Supreme Court Justices William Rehnquist and Sandra Day O’Connor. He also did graduate work at the London School of Economics.

Discerning a call to the priesthood, he attended CDSP, earning a bachelor of divinity degree in 1957. He was ordained to the diaconate June 29, 1957, and to the priesthood on Dec. 21 of that year.

He served at St. Francis’ Church in Moab, Utah, then a missionary district, from 1957 to 1960, left for a brief stint at a congregation in Pennsylvania, then returned to Utah as rector of St. Mary’s Church in Provo. He also served the Utah diocese as chair of its Christian education department.

In 1966 he was called as associate priest at Church of the Epiphany, Los Angeles. In 1973, upon the retirement of the Rev. John Luce, he was called as rector, serving until 1982. He returned briefly to law practice before becoming chaplain of The Episcopal Home (later known as The Kensington, now closed) in 1988. He retired in January 1995 and returned to his home parish of Ascension where he served as an assistant until 2005, continuing thereafter as a member.

At the time Wood served at Epiphany, it was known as the Parish of East Los Angeles and included the mission congregations of St. Bartholomew’s in El Serena and The Redeemer in Boyle Heights (both later united with Epiphany). Then as now, the congregation carried out an active ministry to the Latino community, and was a center of the Chicano movement during Roger’s tenure. In recognition of Roger’s long service to the community, Bishop J. Jon Bruno named him an honorary canon of the Cathedral Center in 2007.

Over the years, Wood wrote several opinion articles for The Episcopal News. In one of these, written in 1979, he evoked the tension between St. Peter and St. Paul who, he said, based on Paul’s letter to the Galatians, “flirted with schism” over the question of circumcision. However, Wood noted, the two leaders agreed “that we should remember to help the poor.” Wood wrote:

“Concern for the poor is something worth having a fight about — even to and beyond the point of schism! The agreement ‘that we should remember to help the poor’ keeps me in community, figuratively if not literally, with all sorts of Anglicans, Roman Catholics, Protestants, Jews, Unitarians and Humanists. (I fail to mention Muslims, Buddhists and Hindus only for lack of experience.) On the other hand, I can feel deep alienation and separation from a sister or brother Episcopalian for whom ‘the poor’ are at best a casual concern or at worst vaguely defined as to include anyone with a material, psychological or spiritual need. If we are going to have a schism, let’s have one about the right thing. Peter and Paul had their priorities straight: agree to disagree about circumcision, but about the poor … never!”