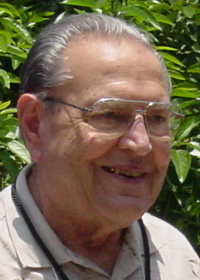 His wife Virginia died in 2014 after 68 years of marriage. Survivors include his daughter, Ginger Conway, and sons Roberto and Tony.

D’Amico was the longest-serving priest in the Diocese of Los Angeles. He most recently assisted at St. George’s Church, Laguna Hills, where he helped found St. George’s Academy (now closed), and served for a time as its headmaster. He also was a co-founder of St. John’s School in Rancho Santa Margarita.

From 1982 to 1985 he was network officer for the Presiding Bishop’s Fund for World Relief (now known as Episcopal Relief & Development).

He was rector of St. James’ Church, Los Angeles from 1963 to 1979; among his parishioners there were singer Nat King Cole and his family. During his tenure he founded St. James’ School, which still thrives today, and which he served as chaplain until 1982.

Before moving to Southern California, D’Amico was canon of the Cathedral of St. John in Providence, Rhode Island, and director of religious education for the Diocese of Rhode Island. He had previously served as a school chaplain in Massachusetts.

“My father would see as his greatest achievement the school at St. James,” said Tony D’Amico. “He had a vision of school open to everybody in the community. He was proud of the racial and ethnic mix there and made sure scholarships were available. It was amazing at that time. It was a beautiful thing to see.”