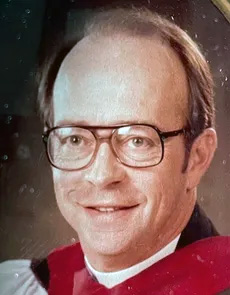 [The Episcopal News] The Rev. George Six, onetime vicar of Christ the King Church, Palmdale (1995 – 1999), and briefly rector of St. Matthew’s Church, Pacific Palisades (1991 – 1992), died Dec. 27, 2022 in Hendersonville, North Carolina, where he has lived in recent years. He was 88, and succumbed to heart failure. He remained canonically resident in the Diocese of Los Angeles.

Survivors include his son, William (Susan); daughters Anne Six Knight (Rodger) and Susan Six, as well as five grandchildren and six great-grandchildren. His wife, Irene Confer Six, who had been his high-school sweetheart and costar in school musicals, predeceased him.

A funeral service was held at St. James Episcopal Church, Hendersonville, on Jan. 6. Internment will be at a later date in Six’s childhood hometown of Lyons, Kansas.

Six came to the Diocese of Los Angeles in 1991 to be rector of St. Matthew’s; soon after, some members of the parish, disapproving of his management of the church and its day school, demanded his resignation. He later served as a diocesan missioner, as vicar of Christ the King, Palmdale, and and interim priest at Church of the Epiphany, Oak Park.

He formerly led churches in Florida, Arizona, Iowa and Ohio. He was a General Convention deputy several times, and served on several committees, including one engaged in the study of prayer book revision. He was engaged with social justice issues, including the ordination of women, abortion, early LGBTQ advocacy, and the homeless. He helped to found a health clinic and low-income senior housing complex in Muscatine, Iowa. In his later years he was executive director of the Henderson County chapter of the NAACP.

Six earned his bachelor’s degree at the University of Kansas and his master of divinity degree at Bexley Seminary in Ohio. He was ordained to the priesthood in 1967.

An obituary was published in the Asheville Citizen-Times.