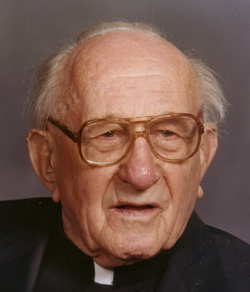 The Rev. Ward Foster DeBeck, former vicar of St. Thomas’ Church, Hacienda Heights, and rector of St. Mark’s Church, Downey, died on March 9, 2014 in Keizer (near Salem), Oregon, where he had lived in retirement since 1979. He was 100 years old.

DeBeck served from 1980 to 2000 as an assisting priest at St. Paul’s Episcopal Church in Salem, where he also was a member of the Woodcutters, a parish group that cut and donated firewood to people in need. He remained canonically resident in the Diocese of Los Angeles during his retirement years.

During his ministry in this diocese, he also served as an associate at Christ Church, Coronado (1959 – 1968) and curate at St. James’ by-the-Sea Church, La Jolla (1949 – 1951), both of which are now part of the Diocese of San Diego. He previously served congregations in Spokane, Washington from 1946 to 1949. He was a member of Rotary International clubs wherever he lived from the late 1960s until his latest years. He also enjoyed woodworking as a hobby.

Ward DeBeck was one of four sons and two daughters born to Edwin and Mae Foster DeBeck, on November 12, 1913, in Vancouver, B.C. and grew up in the Marpole neighborhood of Vancouver. Fr. DeBeck graduated from the University of British Columbia in 1938 and earned a degree in theology from the Anglican Theological College of Canada in 1941. He was ordained to the diaconate in 1941 and to the priesthood in 1942 and served as a chaplain in the Royal Canadian Navy, stationed in Halifax and Victoria. He later transferred his ministry to the Episcopal Church from the Anglican Church of Canada. At various times he served congregations in Puerto Rico and the Virgin Islands as well as California and Washington.

He was married on October 8, 1945 to Marion E. Whebby, who passed away several years ago. The couple had four sons: Bruce, Peter, Erik and Keary, all of whom survive them, along with many grandchildren and great-grandchildren. A memorial service was held on March 15, 2014 at St. Paul’s Church in Salem, Oregon.