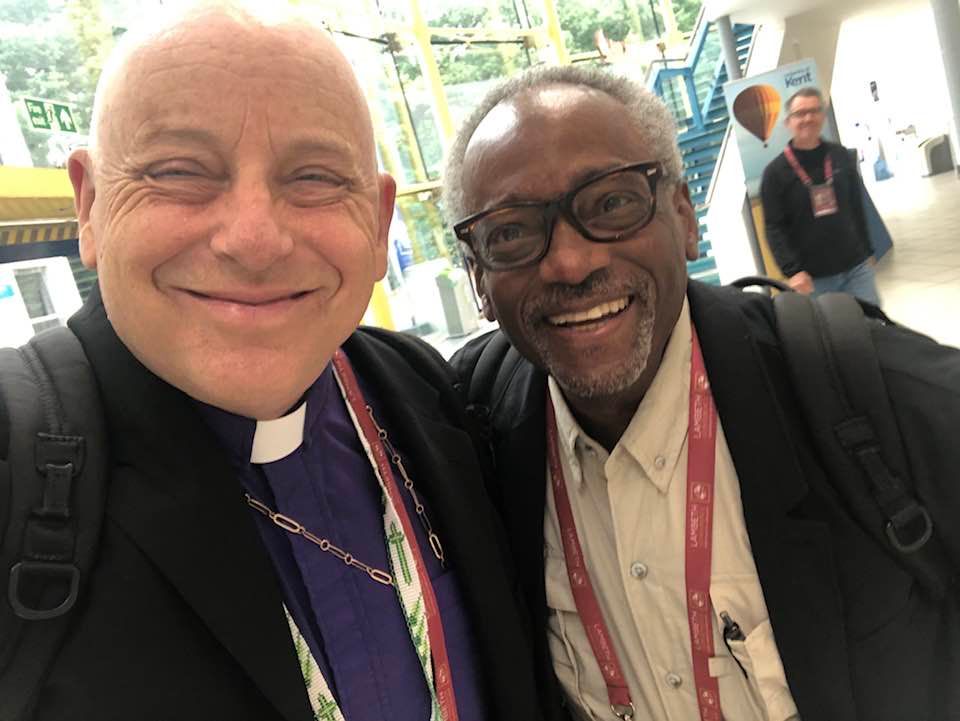 The music presaged the majesty of which the 15th Lambeth conference is capable — as long as we follow the teaching of 1 Peter, our text for this meeting of global Anglicans, and are “holy as [God] is holy.” As long as we are truly “different from the world.”

Spending the day in Canterbury Cathedral, we were washed in this heavenly music during Holy Eucharist and Morning and Evening prayer, and not a few faces were bathed in tears. Hearing the glorious adult and children’s voices of the cathedral choir singing the “Magnificat” made me think of my maternal grandparents, born in Lancashire and London, and wonder if they’d ever made it here, HQ of their ancestral faith. Singing my godfather Louis’s favorite hymn, “Glorious Things of Thee Are Spoken.” When Hitler tried to steal the tune for his national anthem, Louis devoted five years of his life during World War II to taking it back for our Lord. Nearly six hundred bishops from 165 countries singing “The Church’s One Foundation” as in one mighty voice.

We will not be one voice when the conference’s real work begins Saturday, after these two days of retreat for bishops and spouses who were invited (those of gay bishops are being kept away). Deep divisions remain over issues of orientation and identity. Controversy is also brewing over whether conference planners are trying to give binding authority to the Anglican Communion, which is purely consultative.

Bishops of The Episcopal Church met again tonight to give prayerful consideration to these and other questions. At Lambeth, we’re not a caucus. We don’t take votes or act as one. But informal conversations reveal deep concern over changes in our agenda and procedures, including voting yes, no, or “let’s discern more” on a wide range of issues. So far, we don’t know who was behind the changes, only that they occurred at the last minute. Even those who drafted the “Human Dignity” section didn’t know the final version would include a vote on 1998’s resolution saying homosexual relations and marriage equity went against the Bible.

Fictional LAPD detective Harry Bosch calls this “high jingo,” hidden influence at the highest level. After an outcry, planners changed the marriage equity language enough to attract considerable support, including from me — but some say that since high jingo’s a factor, we shouldn’t vote at all, on anything.

I hear them. But if other folks are voting, it makes sense to vote, too, and use whatever influence we have to help the Holy Spirit do her work. And if I have a chance to speak up for revoking 1998’s language, I will. The new text says that some in the communion support marriage equity, others don’t, and we’ll stay together nevertheless. I’ll do my best to explain my view to new friends who don’t agree by referring again to 1 Peter, which invites us to have “genuine mutual love, [to] love one another deeply from the heart.” And to borrow from Paul to explain Peter, love means not insisting on one’s own way.

Other highlights? Oh, Lord, too many to mention. A lengthy morning chat with Presiding Bishop Michael B. Curry as I tried unsuccessfully to connect him with his ride. Walking through a crowd with the most powerful voice in contemporary Christianity is like taking a stroll with Biden. The heads snapping around at the sight of him actually changed weather patterns. Comparing notes with the Rt. Rev. Ernesto Flemming, newly elected in the Diocese of the Northeast Caribbean and Aruba. Catching up with friends the Rt. Rev. Silvestre Romero (Guatemala), the Rt. Rev. Juan David Alvarado (El Salvador), and the Rt. Rev. Enrique Treveno (Cuernavaca), now Mexico’s primate. Old friends and new from Canada, and the Kenyan bishops of the Rev. Dr. George Okusi and the Rev. Arthur Toro. Getting to know the Rt. Rev. Nicholas McKinnel, bishop of Plymouth, in southwest England, who is a friend of Kathy Hannigan O’Connor’s friend the Rev. Jonathan Aitken, Nixon biographer and former MP and cabinet official, with whom, schedule permitting, I’m having dinner a week from Saturday.

And watching with joy and pride as our own Rev. Dr. Fennie Hsin-Fen Chang translated for Taiwan’s bishop, the Rt. Rev. Lennon Yuan-Rung Chang. It was during the Episcopal bishops’ private meeting, so Fennie heard some stuff. She’s unfailingly discreet. Still, with Fennie translating, I told them Mr. Nixon’s old joke about Churchill and Stalin getting drunk at Yalta, forgetting what they’d agreed on, and having the translator shot. 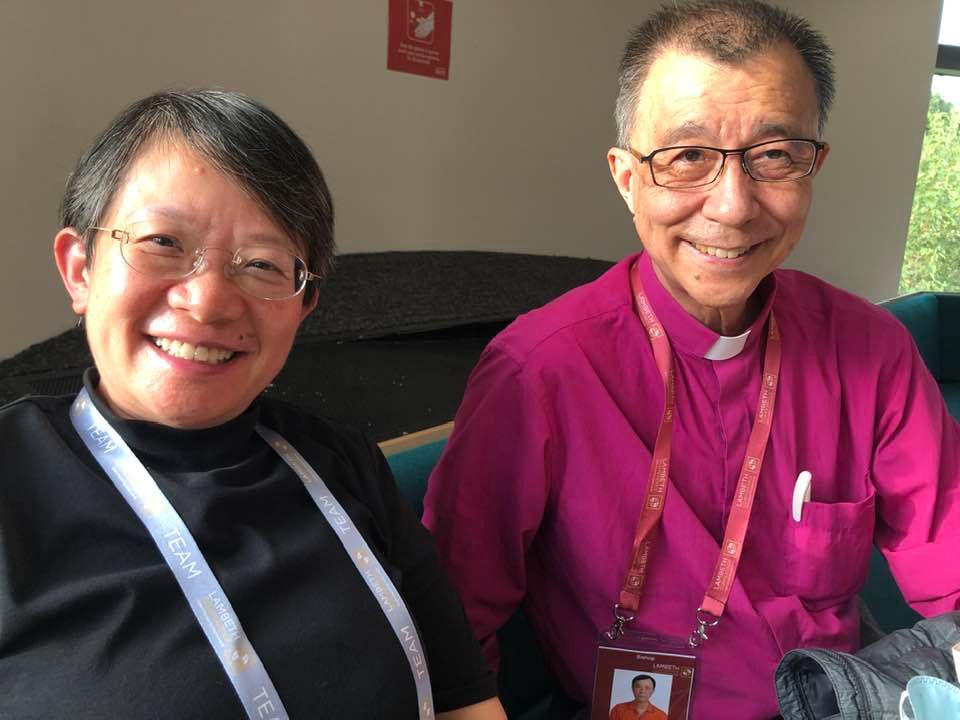 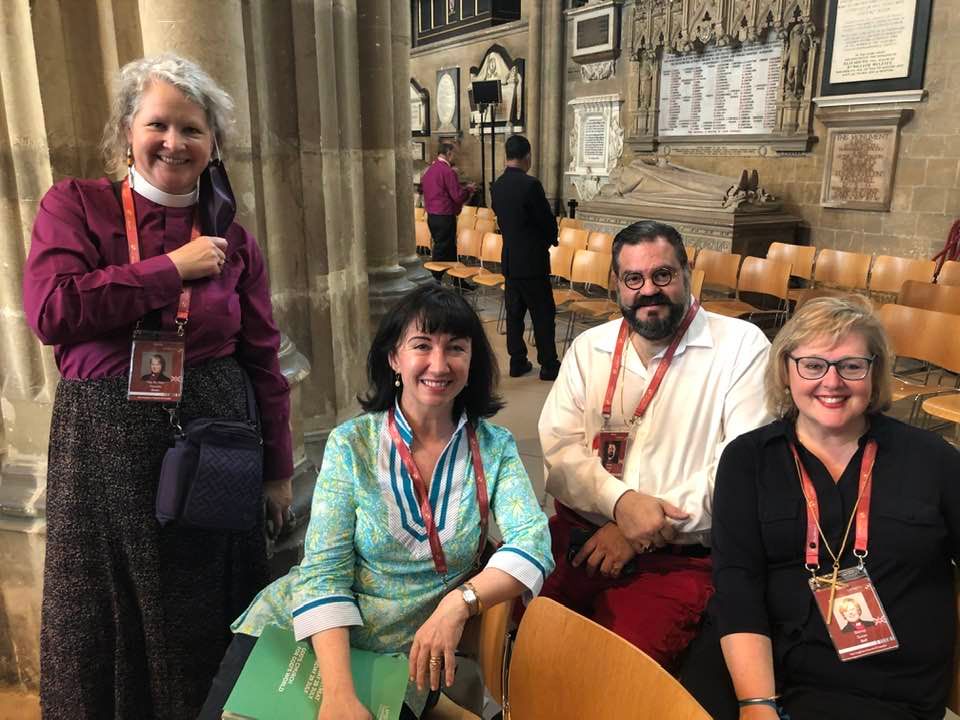 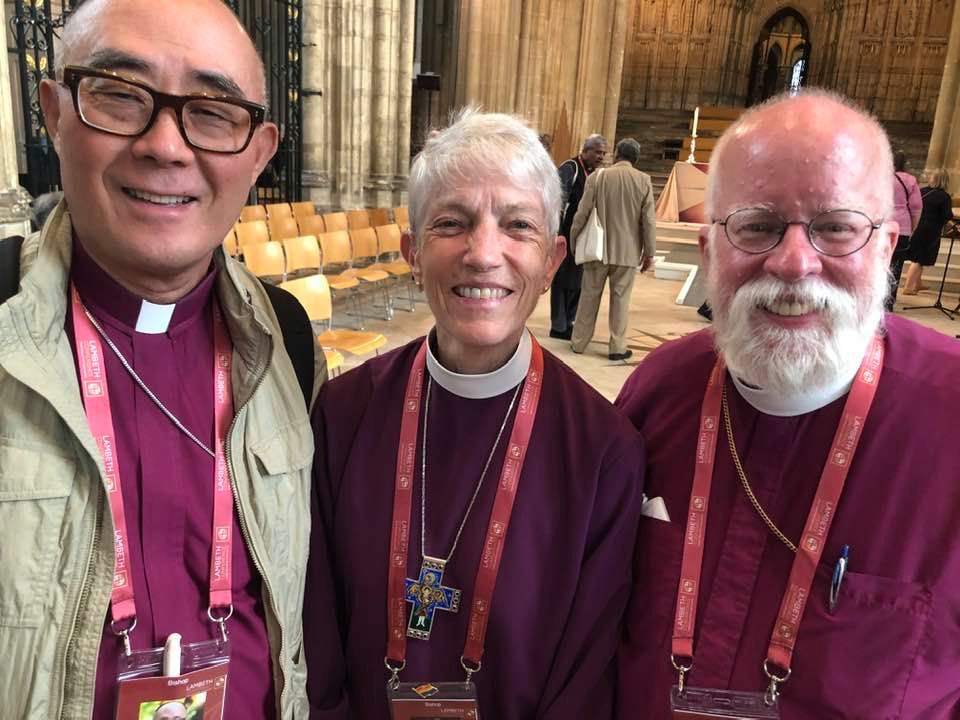 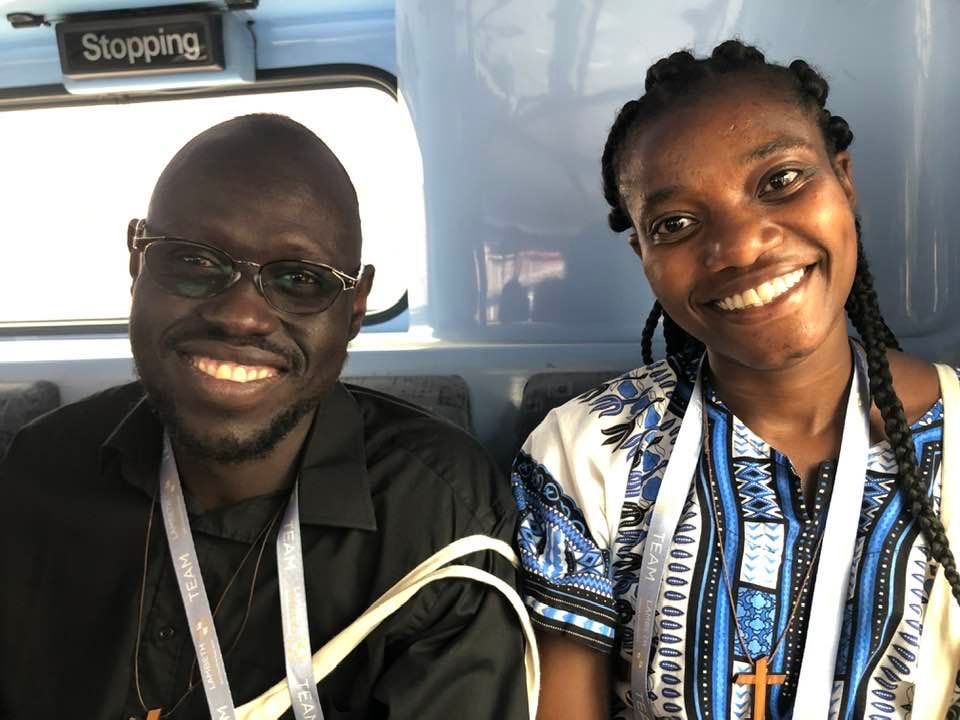 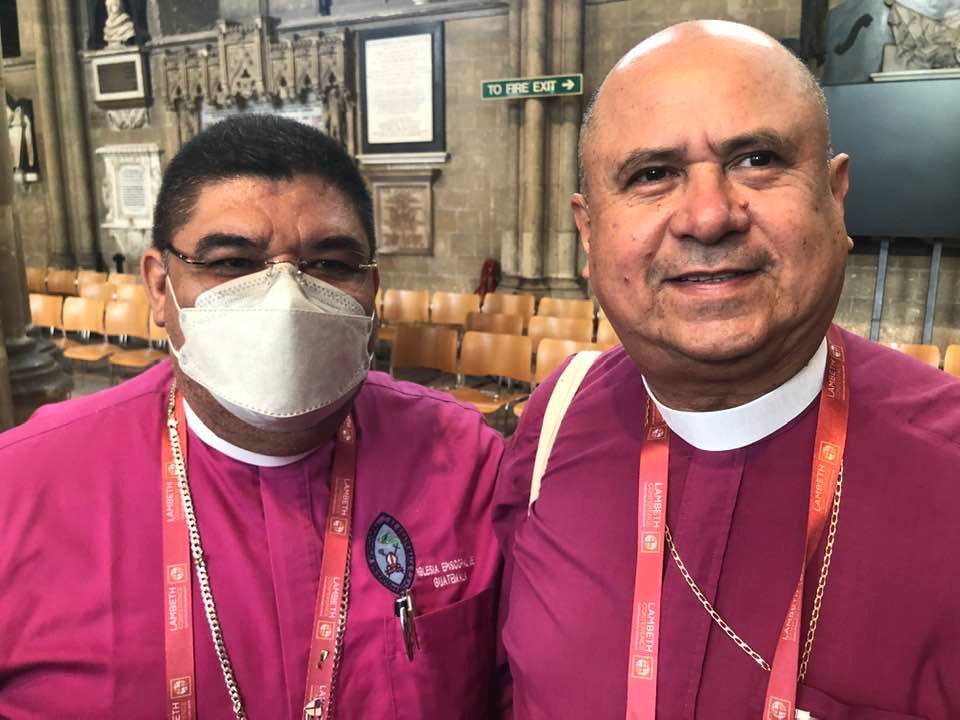 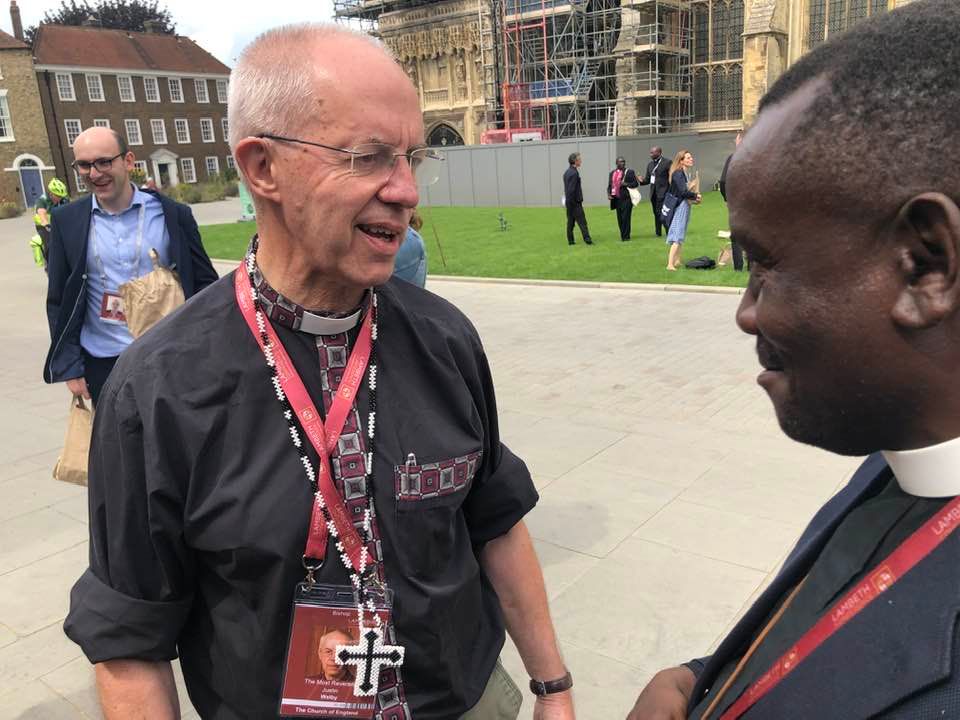 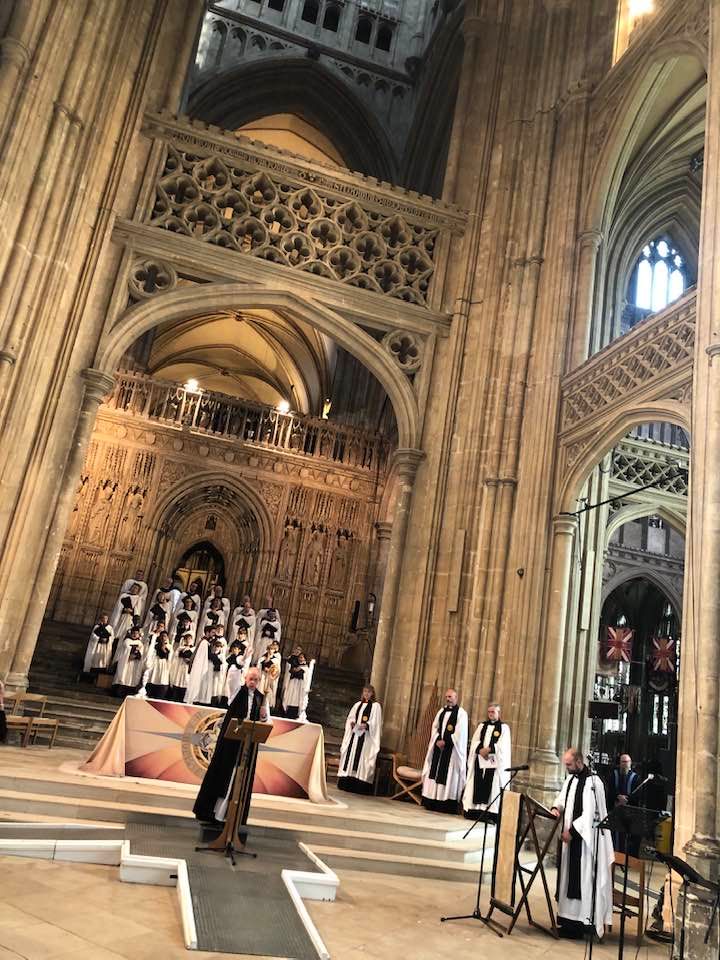 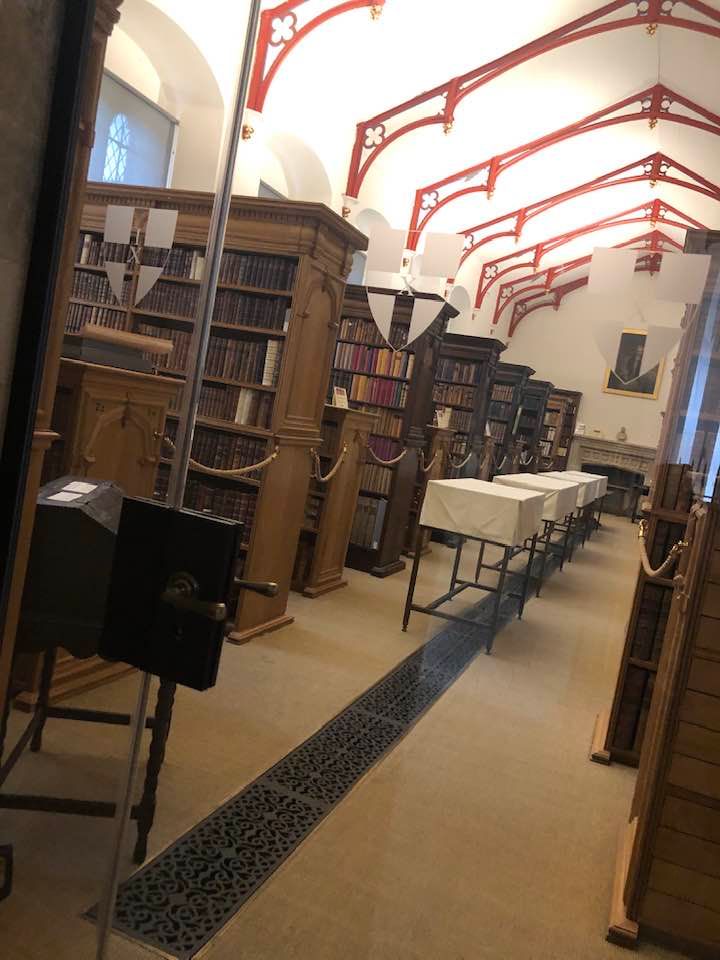 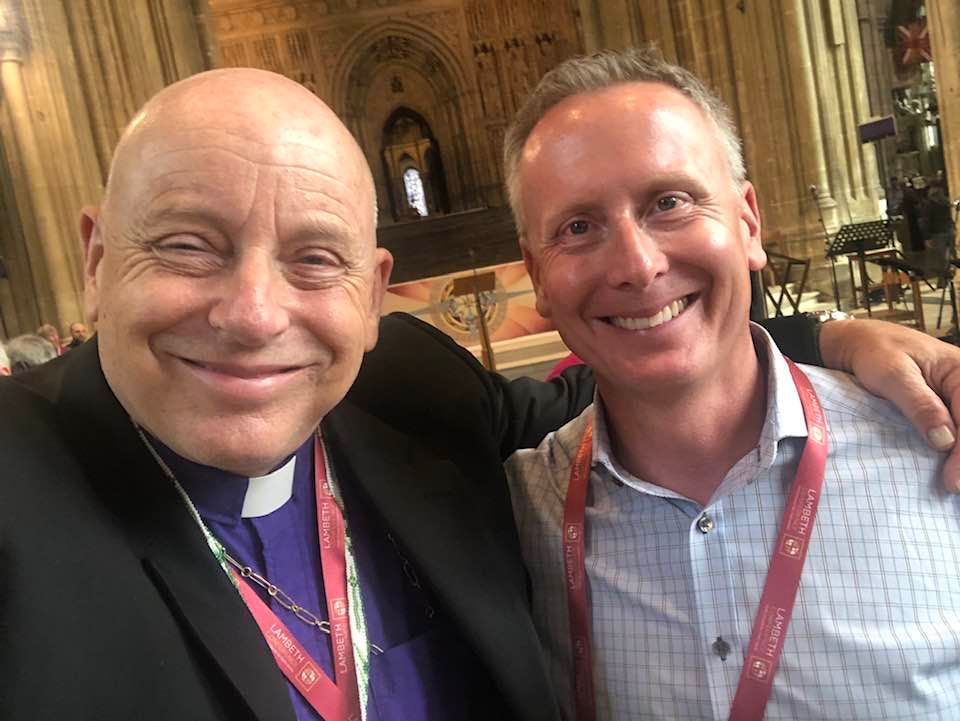 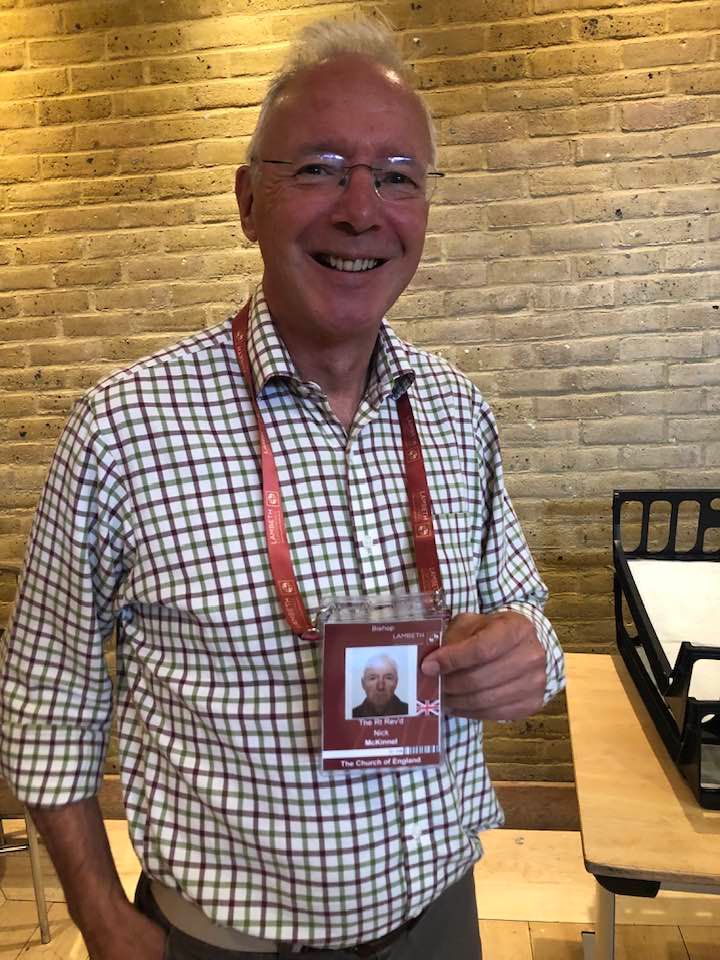 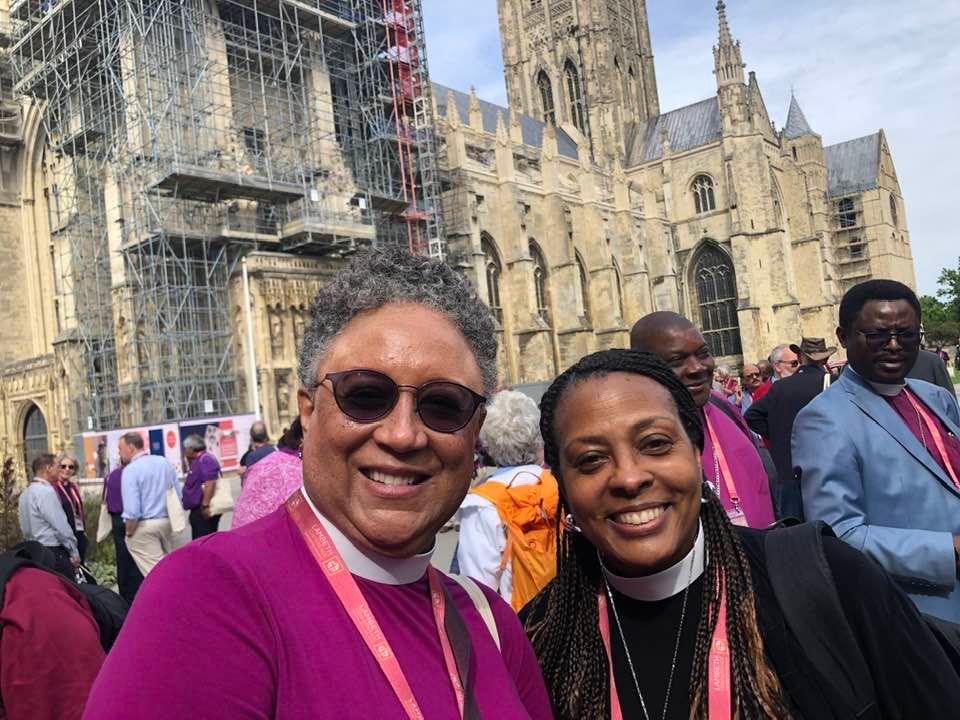 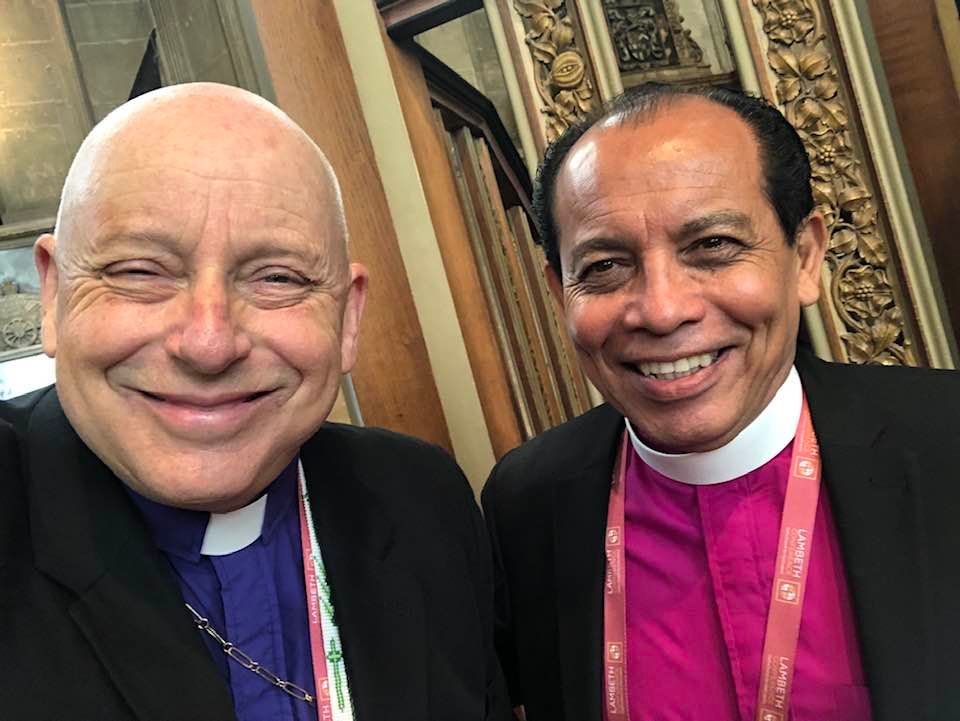 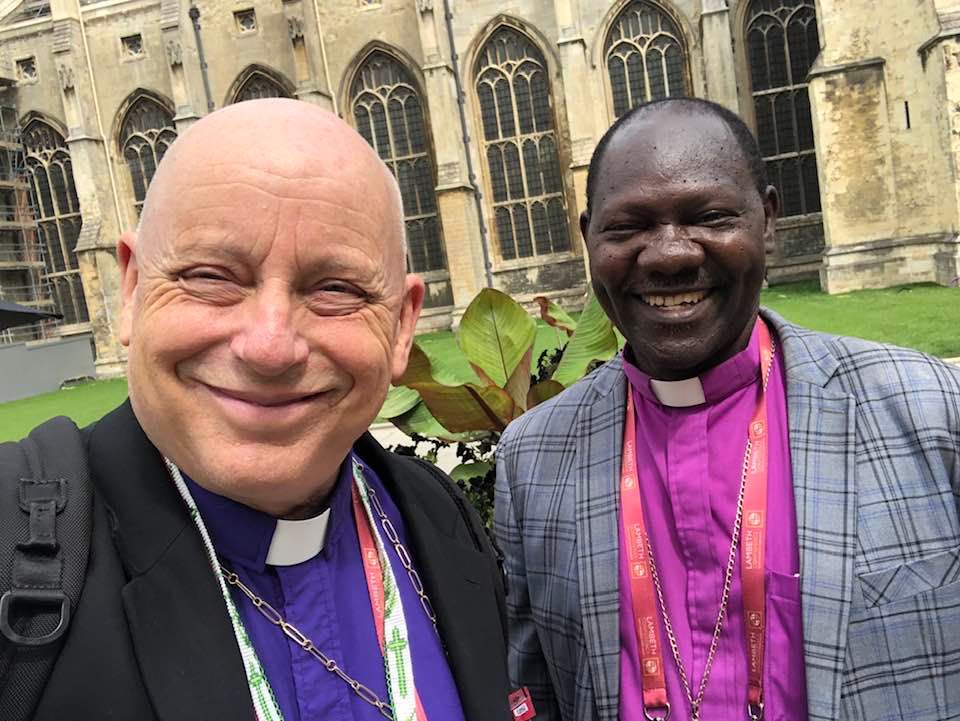 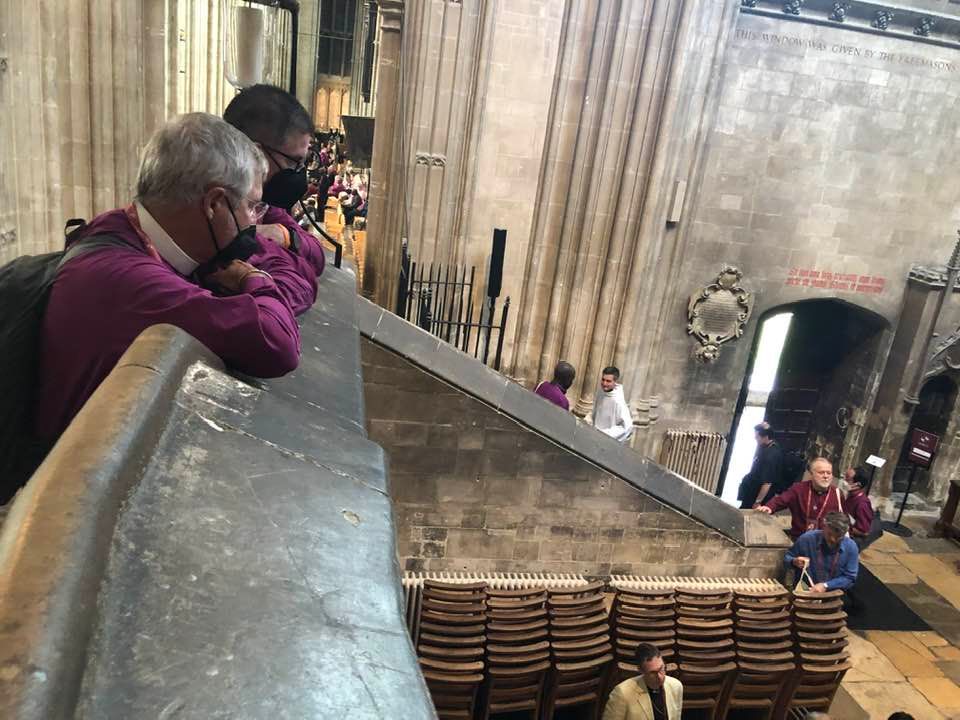 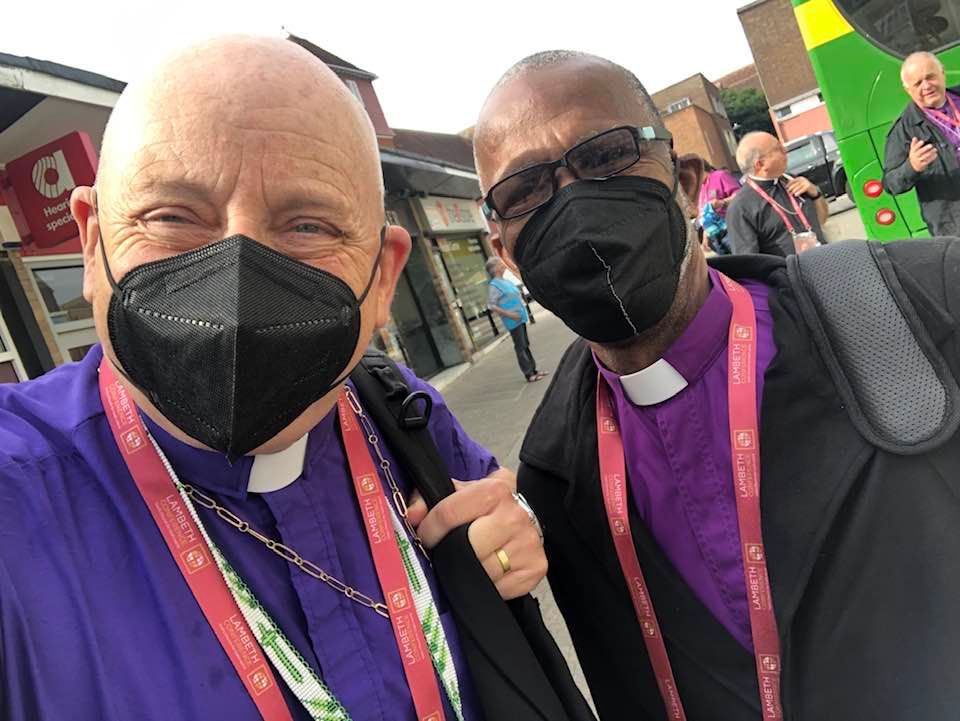 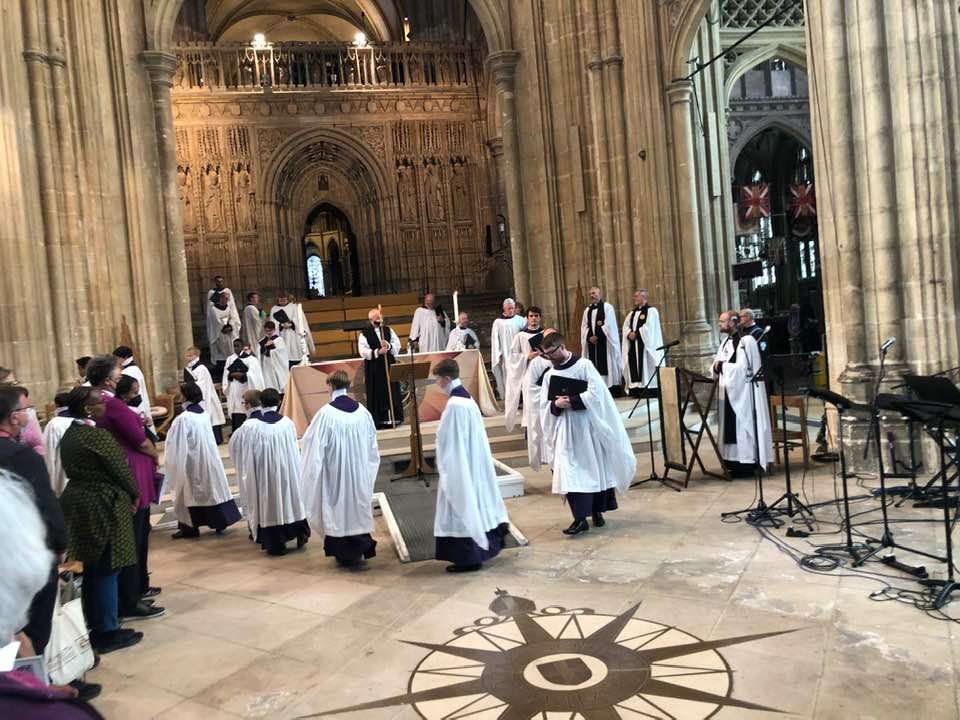 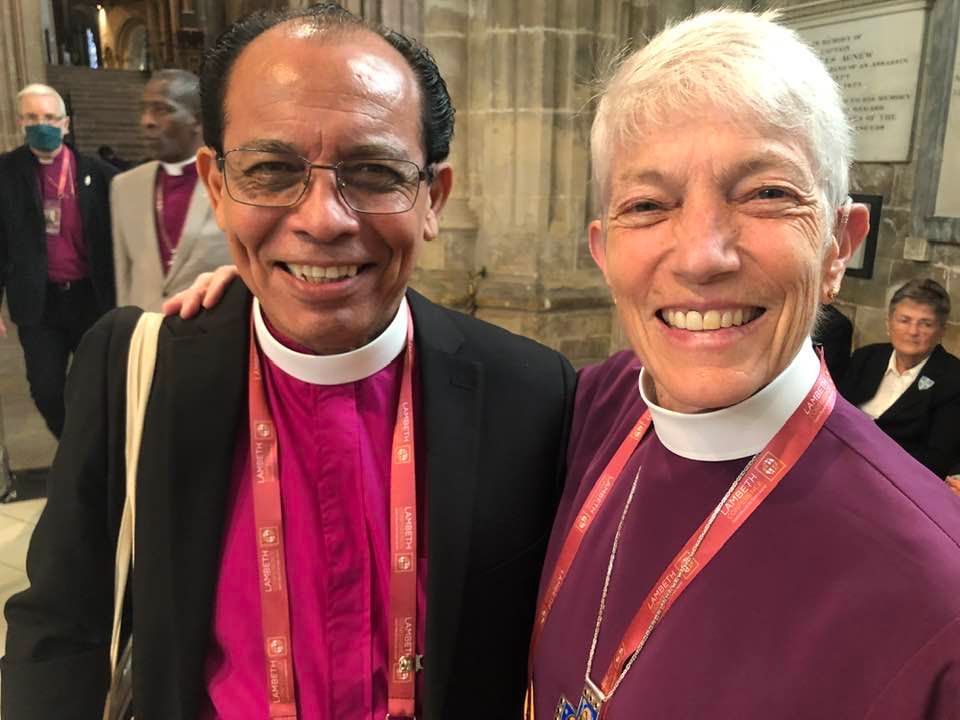 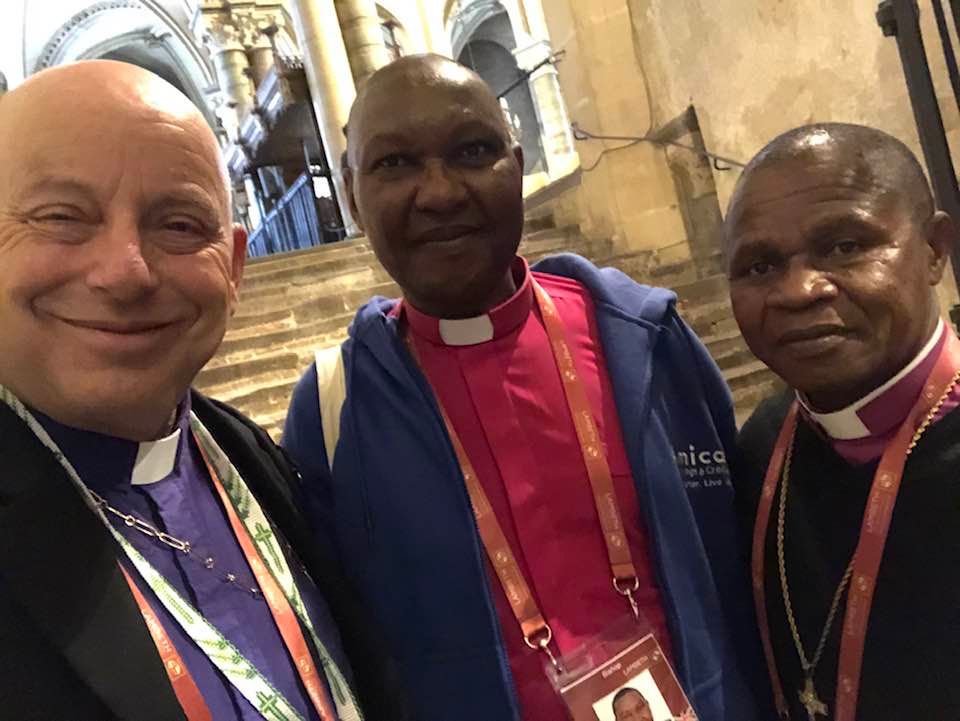