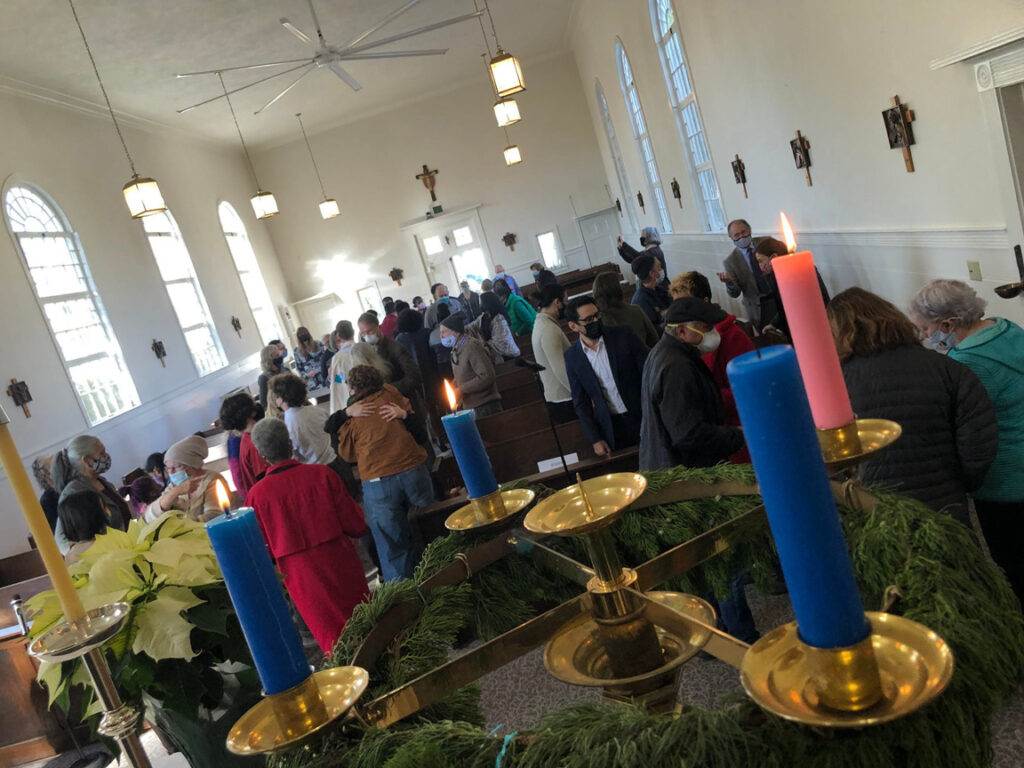 May all the joys and blessings of this sacred season be with you and those you love.

Charles Dickens wrote this of Scrooge: “He carried his own low temperature always about with him. He iced his office in the dog days; and didn’t thaw it one degree at Christmas.” Everyone in ministry is a temperature setter, too, or so a mentor priest once told a group of us. She said we would change others’ outlook not so much by preaching and teaching but by adjusting our temperamental thermostats – setting them on kind, empathetic, cheerful, curious, and just. Setting them on love.

The Christ child is the anti-Scrooge, cooling fevered, anxious brows, warming cold days. Not knowing when Jesus was born, early Christians gave the world his annual celebration when it most needed his fire — a few days after the winter solstice, when nights were longest and coldest. Christmas has been a warming pinpoint of hope in the darkness ever since.

During Advent, we’re on a precipice, teetering between darkness and light, alpha and omega (delta and omicron this year), the imperfectability of earthly life and God’s realm of justice, peace, and love. We all know people – maybe we are people – who complain when someone says “Merry Christmas” too early. And yet it’s better not to grasp too quickly for the precious gift in the manger. We spend liturgical time preparing to come before him in awe – the child who transforms the world just by being and then goads us to be transformative in his name, spirit, and example.

Loving the world as he does, the child asks much of those pledged to imitate his love. The one who feeds the world with his body gives us heart to help the food and housing insecure. Jesus lends prophetic authority to the anguish we feel at news of armies massed on Ukraine’s borders or of families fleeing violence and injustice who are shivering south of our borders. Discerning the connection between Jesus’s authority and his vulnerability and self-sacrifice, we may even receive grace to lay down our privilege, or at least put it to work for God’s glory and the sake of God’s people.

This Christmas, we can again offer warmth and fellowship to one another by gathering safely and celebrating the Nativity in person. Giving thanks for our reunited communities of faith in the Episcopal Diocese of Los Angeles, let us redouble our work of reconciliation in our families, churches, and communities, and in a nation so addicted to fear and certitude that just watching the news can make us feel Scrooge’s chill in our bones. This Christmas, let us covet Christ’s and one another’s warmth. Let us be the way we want others to be. Let us be the world we want.

In English and Spanish, this message was sent on Dec. 13 to members of the Episcopal Diocese of Los Angeles community. The photo shows members of Holy Nativity Episcopal Church, Westchester – Los Angeles CA passing the peace on the third Sunday of Advent.