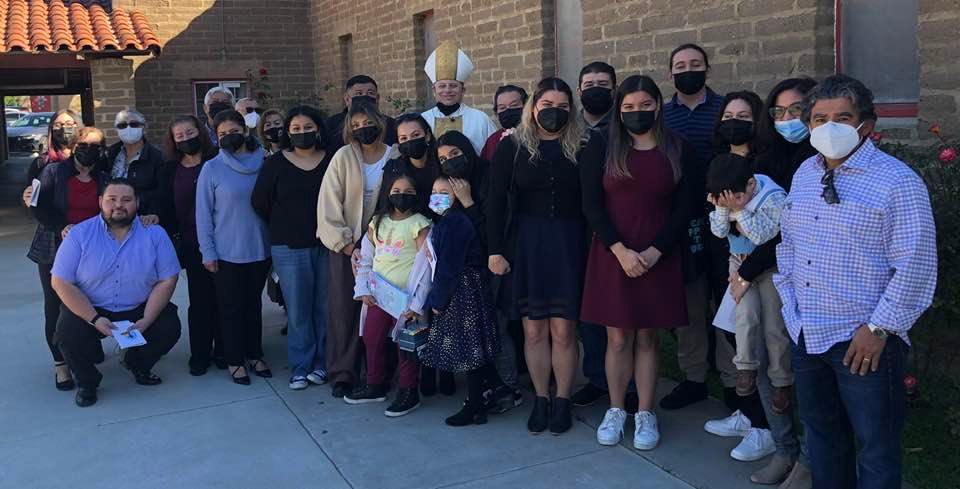 Nestled on a side street in the city of San Fernando, which is itself enclosed on all sides by neighborhoods in the northernmost reaches of Los Angeles, St. Simon’s Episcopal Church/Iglesia Episcopal de San Simón is back worshiping on Sundays in English at 8 a.m. and Spanish at 10. The priest in charge, the Rev. Courtney Tan, though relatively recently ordained, gives the impression of having been born to her pastoral vocation. She grew up in Devon in England, where her family lived next door to St. James’ Church. As a girl, she helped the vicar set up for the 7 a.m. service and says that to this day, she loves nothing better than a quiet, expectant sanctuary and nave early in the morning, ready to welcome the people of God.

The mission church of St. Simon began its welcoming work in 1921, when Harding was president and the town was almost all white. In 1951 Bishop Francis Eric Bloy (whose crozier my kind chaplain, junior warden Antonio Godinez, and I carried today) laid the cornerstone for the current building on Hagar St., which is beautifully designed and set on spacious grounds whose garden Courtney enjoys tending.

Today San Fernando is 93% Latinx, and St. Simon, now a parish, is a UN of the Americas. During the delicious lunch in the parish hall after church, I sat with Gladys and Ramirez Lucho (married 35 years ago at St. Simon’s) and others from El Salvador, who told me about political and economic conditions there. Antonio and his spouse, Berta, both from Mexico, celebrated their 19th anniversary today. I had just finished Silvia Moreno-Garcia’s noir mystery, “Velvet Was The Night,” set in the early 1970s, when the Mexican government hired thugs to beat up student demonstrators, part of Mexico’s CIA-supported dirty war. Berta said she remembered it well, especially the Tlatelolco massacre of unarmed students in Mexico City in 1968.

The lunch party didn’t break up until after 1:30. Even as we observed COVID protocols and worried about those who couldn’t be in church because of positive tests, everyone said they had grown hungry for the fellowship and mutual support that church does best, especially when people can be together.

The day’s main event was the confirmation of Jasmine and Odallys Duenas, sisters in their early 20s, both teachers, fully engulfed in their large, loving family. Each served as a lector as well. Courtney and I shared the bilingual liturgy, and I preached in both languages, warning in advance that my Spanish wasn’t great and my English not much better. After the main service, we processed outside and blessed two signs that thoughtful neighbors who love the parish had repainted without even being asked.

The music, in Spanish and English, was wonderful. The prevailing cheerfulness, besides being in the nature of St. Simon, owed something to Courtney’s ministry, which began last August. Wonderful priests and pastors have served here since 2000 — the Rev. Roberto Maldonado and the Rev. Canon Jorge Pallares and the Rev. Charles Collier, a devoted Lutheran colleague who spent over two years at St. Simon. Amid the anxiety of these days, the people of God and Courtney took quickly to one another. Senior warden Theresa Cervantes and Courtney are working in close partnership. It will be easy to pray that it will abide as long as the restless Spirit of Christ may permit.