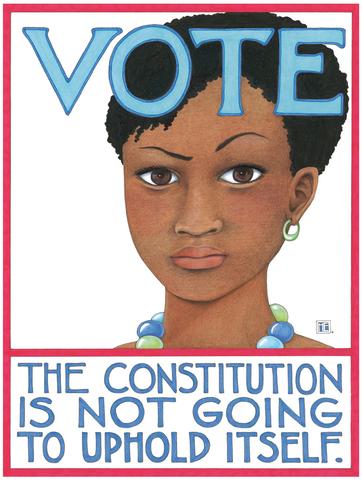 The June 2018 California primary was the first election I’d missed in many years. I felt ashamed I didn’t have my “I voted” sticker for my collar tab. But I hadn’t managed to move my voter registration from Orange County to Pasadena. Mea culpa.

I finally did it last month. Ten minutes with clunky 2008 on-line technology, confirming numbers and addresses, then an email from the registrar saying my application was under review. How kind of them. And this is California. Imagine living in one of those states where politicians are actually trying to make it harder for people to vote.

I do get the voter ID issue — but if you want to speed up a transaction in this society, if you want to make it easy for a person to get something when you want something in return, then watch how the security barriers come down. Nobody’s more worried about buyer ID than American Express. But if you have Apple Pay or something like it, any app linked to a credit card, your phone goes ding within ten feet of a checkout terminal. I got that without anyone asking to see a folded up copy of my water bill or something else confirming address, citizenship, height, or weight. But the phone knows — all that and more. The grid knows. It’s their business to know.

If we wanted people to vote as much as we want them to buy, we would create an app for that and transform our society and culture by creating a government that looks like the nation that actually exists. In 2016, 80 million eligible people didn’t vote. Compared to those who did, they were dramatically less white, old, propertied, and wealthy. If you are thinking, well, you know which party they would’ve voted for, I get that, but it’s not an especially democratic impulse. Our system depends on electing *representatives*, and everyone deserves to be represented. Not just the people who are motivated to vote to protect their status quo.

I have friends who insist that voter suppression isn’t a real thing, and I love them. But it is. And it’s a contemptible civic sin. I am not against voter ID. I’m against using it to keep people from voting, which no politician or official in a free country should ever do. It desecrates the flag and every patriot grave. Voting is our birthright. If you want to make sure ever vote is legitimate, then you think of ways to do it that get people to the polls instead of keeping them away. If you don’t know how, call Google or Apple, and they will set you up.

But the problem goes deeper than that. Every incumbent, Democrat as well as Republican, tends to want to keep turnout where it is, because that’s the playing field they know. If it weren’t true, our politicians would be leading an effort to modernize and streamline the registration system. They do in some states, I read — but not in California, that’s for sure. Even in California, there’s a certain amount of elitism built into the system. We need informed voters, some people say. It’s up to the voter to take the initiative.

That’s not actually correct. All people are geniuses about the lives they’re leading. Whether the city cleans their streets or makes it a priority that everyone has a place to sleep at night. The police treat them fairly compared to other people. Taxes seem right compared to the services they get. Just decisions are made about whether to send young people to fight and die. Everyone has the power of the state coming down on them in one way or another, and everyone gets to say yes or no. That’s what the Declaration of Independence and Constitution say. And that’s what Jesus says.

Everyone. All are created equal. The job of our governments at every level is to stop hiding behind the systems they create to protect their jobs and at long last make sure every voice is heard.

Governments that take all into account, balancing interests and grievances fairly, are better governments. If every voice is heard, watch policies moderate. Watch partisan divides narrow and polarization diminish. Watch justice roll down like waters.