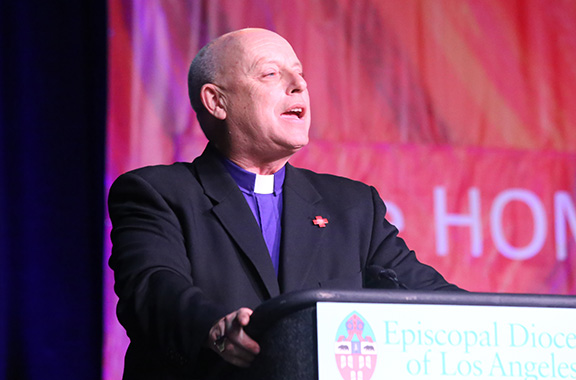 Bishop John Harvey Taylor called upon Southland Episcopalians to “come home” to renewed unity, commitment, connection and caring, during a Nov. 30 address to delegates on the opening day of the 123rd annual meeting of the Diocese of Los Angeles at the Ontario Convention Center.

“Come home … to where our sibling is never the enemy, no matter who they are or what they believe,” he said. Taylor told more than 400 lay and clergy delegates, guests, visitors, and exhibitors that the two-day gathering “stands in gracious contrast to the way the world is now a world of division and polarization, scapegoating and us-versus-them thinking.”

One of the first acts of convention was a vote to formally admit St. James’ Church in Newport Beach as a mission congregation of the diocese. Its members had returned to the Lido Island building April 8 as a mission station after a three-year absence. They had been estranged from the diocese after a dispute arose when retired Bishop Jon Bruno had attempted to sell the property. During the past year the congregation went through the formal canonical process of applying for mission status. On Friday, the Very Rev. Canon Kelli Grace Kurtz, chair of the Program Group on Missions, announced that the congregation had fulfilled all requirements, and asked Taylor to certify their application. Taylor answered with an enthusiastic affirmation, and convention voted on the proposal. 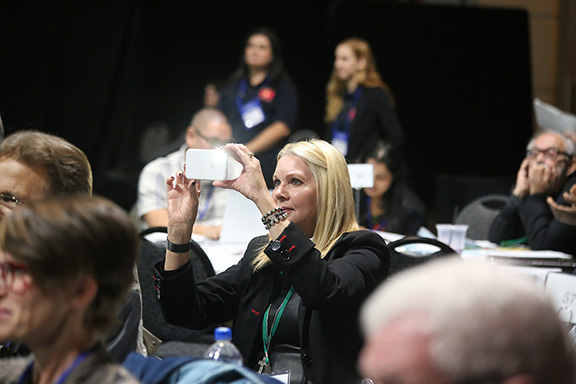 “We are happy to be back home in the diocese,” the Rev. Canon Cindy Voorhees, the congregation’s priest, told The Episcopal News after Friday’s vote. “We are glad we can move forward. Thank you to everyone who worked so hard to make this day happen.”

While giving thanks for the return of the congregation as a mission church, Taylor also “recognized that, on a separate schedule with its own imperatives, our process of truth-telling, mutual accountability, and reconciliation continues.”

For Canon Steve Nishibayashi this convention includes numerous “multiple transitions.” Elected last year to succeed retiring Canon Janet Wylie, Nishibayashi said there were a few glitches, given the recent rollout of a new diocesan website, and delegates’ first-time use of electronic balloting.

Delegates got some laughs as Nishibayashi took them through several tests and training exercises on the high-tech equipment and they were asked to vote for their favorite baseball teams, characters from the movie Frozen, the best time to start singing Christmas carols, and which Hogwarts house the “sorting hat” would choose for them (a reference to the Harry Potter series). Overwhelmingly, delegates voted for Gryffindor.

Results are shown on the convention hall screen of one of the test questions that both amused the delegates and taught them to use the new electronic voting equipment. Photo: Janet Kawamoto

A last question, “Are you in favor of or against electronic voting?” resulted in a 429 – 30 approval rate — a result that pleased Nishibayashi, who said he decided to try electronic ballot after reviewing comments from the 2017 convention.

“We had feedback from last year’s evaluation, saying ‘Let’s bring convention into the 21st century,’” he told The News. The voting went well and the new system is economical and time-efficient, he said.

Judge of Elections Canon Patti Jo McKay agreed. “I’m pleased,” she said. “There were some little things that needed to be addressed. But we met our goal of moving another step toward going paperless and really, that’s the responsible thing to do.”

McKay, a Los Angeles Superior Court judge, succeeds Canon Roger Leachman, who retired last year. She applauded the timely vote results. “People vote quickly, and in 10 to 15 seconds, 90 percent of the vote is in.”

Delegates also elected diocesan officers (see report here) and approved canonical changes. Elections for the Commission on Ministry and the Standing Committee were carried over for the second day of convention.

In an address both prophetic and pastoral, frequently punctuated by applause, Taylor chided untruthful political leaders, lax gun control laws and immigration policies that culminated in the recent tear gas attack on families seeking asylum at the U.S.-Mexico border.

“This is not a debate about open borders; all nations need secure borders; but no nation can have secure borders without just, human, common-sense immigration laws,” he said.

In response, he said, he will join a Dec. 22 pilgrimage of interfaith and political leaders to Tijuana, co-sponsored by the diocesan Sacred Resistance Task Force.  The pilgrims’ plan is to “express solidarity with our Central American sojourners, deliver supplies, and help them however we can.”

Taylor also cited such disasters as a 7.0 earthquake in Alaska earlier in the day, recent wildfires that devastated parts of Northern and Southern California, and the Nov. 7 shooting deaths of 13 in the Borderline Bar in Thousand Oaks as tragedies that have impacted the entire community and “others in our convention today.”

He called upon convention delegates to support those affected by the fires by giving money at www.edlagives.org or visiting the website of the Diocese of Northern California, where at least 88 people have died and about 196 are still missing after the disastrous Camp Fire.

The Episcopal Community Federal Credit Union, through low-cost loans; Prince of Peace Church’s West Valley Food Pantry in Woodland Hills and St. Luke’s advocacy and service to its Long Beach neighbors are examples of ministries that have worked to break down “our family’s cultural, ethnic, language, and socio-economy barriers through the sharing of narrative and deepening of relationship.”

Promising financial transparency, Taylor briefly referenced the budget, to be presented Dec. 1 in a new format. A major capital campaign is planned, with a feasibility study to be underway by late 2019, he said.

But, he warned that “some lean years are ahead before new funding catches up” to dwindling reserves.

“If you want historic churches to stay open; if you want our vital ministry to asylum seekers and refugees to continue; if you want us to continue to offer top-quality local seminary education; then when you’re making your personal and parish mission share fund pledge, as Bishop Bruce likes to say, ‘dig deep’!”

A new “Hungry Hearts” grant will aid start-up and other creative ministries, he said. Thirty grants, totaling $141,000 will be awarded in 2019, “focused on social enterprise” ministries.

Sustainability will be encouraged through leveraging congregational resources “for the glory of God … to help sustain our churches in the future,” he said.

Canon Julie Dean Larsen, diocesan chancellor, has also come up with a program to help congregations who already have or may be considering negotiations for a cell tower on their property.

A video of the bishop’s full address is here (beginning at about the three-minute mark).

Taylor said that contemporary-themed convention worship was designed to illustrate that “no one is to be excluded, no one is to be left out.” Evening prayer was focused on the #metoo movement for women’s rights.

Delegates also heard from numerous speakers, including the Very Rev. Sylvia Sweeney, dean of Bloy House (The Episcopal Theological School at Claremont), who assured convention that, while the Claremont School of Theology, with which is shares facilities, may be leaving Southern California, “Bloy House is the seminary of the Diocese of Los Angeles and will remain within its geographic boundary forever.”

Episcopal Community Services (ECS) – Board member Cathy Clement shared that her father lived at one of ECS’ retirement communities, the Canterbury in Rancho Palos Verdes, and loved it. Clement, who is president of the Episcopal Network for Stewardship, said is also partnering with the diocese to create new communities. She presented a video report, which may be viewed here.

General Convention delegates also shared via video about their experiences at the 79th General Convention, held July 5 – 13 in Austin, Texas. (The video will be posted soon on the diocese’s Facebook page.)

The Rev. Michael Bell served as chair of committee on dispatch of business, a position formerly held by Canon Steve Nishibayashi.

Richard Blackburn of the Lombard Mennonite Peace Fellowship also addressed convention, describing the reconciliation process which began about a year ago. In general, He said that more opportunities for reconciliation workshops will be available in 2019. Visuals from Blackburn’s report are here.