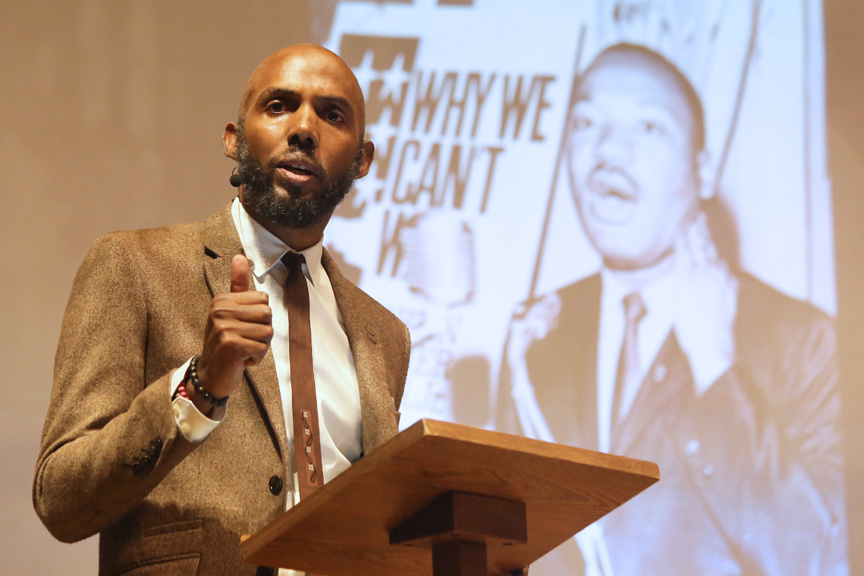 At the 2019 Martin Luther King Jr. Day event, Devon Carbado evokes King’s vision as he traces the history of racial law and its effect on the lives of African Americans. Carbado will keynote the 2020 observance on Jan. 18 at Holy Faith Church, Inglewood. Photo: Janet Kawamoto

Carbado, an associate vice chancellor at UCLA and a professor at the university’s school of law, addressed last year’s gathering, saying on that occasion, “Law and morality are not the same thing.” Furthermore, he said, “The civil rights trajectory, the pathway to social change, is not linear. It reflects what we might call a reform entrenchment; a movement forward, then a movement backward.” (An Episcopal News report on the 2019 event is here.)

Carbado’s legal expertise includes constitutional criminal procedure, constitutional law, and critical race theory. His scholarship appears in law reviews at UCLA, Berkeley, Harvard, Michigan, Texas, Cornell, Yale and more. Carbado has won many teaching awards, including being elected professor of the year by the UCLA School of Law classes of 2000 and 2006. In 2005 he was named an inaugural recipient of the Fletcher Foundation Fellowship. Modeled on the Guggenheim fellowships, it is awarded to scholars whose work furthers the goals of Brown v. Board of Education. In 2016 he was named an Atlantic Philanthropies Fellow, and in 2017 he was awarded the American Bar Foundation’s Neukom Fellows Research Chair in Diversity and Law. Carbado has also taught at UC Berkeley Law School, University of Virginia Law School, and Harvard Law School. Carbado earned his bachelor’s degree in history from UCLA and his law degree from Harvard Law School. He is connected with UCLA’s Critical Race Studies Program, which focuses on racial justice advocacy, racial justice teaching, and racial justice law.

All are welcome at the service, which also will feature The Episcopal Chorale, a renowned gospel group directed by Canon Chas Cheatham.