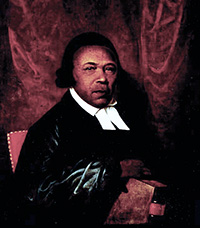 A service in celebration of Absalom Jones (1746 – 1818), first African-American priest in the Episcopal Church, will be held on Saturday, Feb. 22 at 2 p.m. at St. Philip’s Episcopal Church, 2800 Stanford Way, Los Angeles. The “loving, liberating and life-giving” service, sponsored by the H. Belfield Hannibal chapter of the Union of Black Episcopalians, will celebrate Jones’ life and ministry with lessons and spirituals. All are invited.

Absalom Jones was born into slavery in Delaware in 1746. He was sold to a farmer who took him to Philadelphia, where he learned to read and write. After he married Mary King, he bought his wife’s freedom; his slaveholder later freed him. Jones became a lay minister of a Methodist church, but left it when the congregation restricted Black worshipers to seats in the balcony. Later he joined the Episcopal Church, founded the African Episcopal Church of St. Thomas in Philadelphia, and was ordained as a deacon, then a priest. He continued his ministry and his work for the abolition of slavery for the rest of his life. The Episcopal Church remembers him in its calendar on Feb. 13, the anniversary of his death in 1818.