Ann B. Davis, Brady Bunch’s ‘Alice,’ will be ‘sorely’ missed

The world knew and loved her as ‘Alice’ of Brady Bunch television fame, the wholesome, down-to-earth housekeeper with a heart of gold and ever-ready supply of snappy one-liners. 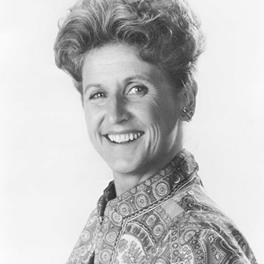 Off-camera she was all that and a staunch Episcopalian besides, retired Bishop of Colorado William Frey said of Ann B. Davis, best  known for her role as the iconic housekeeper. She died June 1 after a fall at her home in San Antonio, Texas. She was 88.

“She was a very faithful churchwoman and Christian with an insatiable curiosity. She would spend a couple of days studying a week for her bible study at St. Helena’s Church (www.sthelenas-boerne.org) in Boerne, north of San Antonio,” Frey said during a June 2 telephone interview. “She went there twice a week, Sundays and to a midweek Eucharist. She sang in the choir.”

Davis had lived with Bill and Barbara Frey for more than 38 years, “and will be terribly missed. My 58-year-old son called me in tears yesterday,” Frey said. We’re still in a state of shock. The grief hasn’t completely soaked in yet. We feel it, we recognize it; she leaves an enormous vacuum in the family.

They discovered her unconscious after receiving a phone call when Davis failed to show up for a regular Saturday morning hairdresser appointment, Frey told the Episcopal News. “We found her in the bathroom. She’d fallen and hit her head. She never regained consciousness. She died very peacefully 24 hours later.”

Davis, who never married, met the Freys while doing summer stock theatre in Denver, according to Tom Beckwith, a General Convention deputy from Colorado and former diocesan communications officer.

“She was always herself,” Beckwith recalled. “There was never any pretense. She was a very humble, very cheerful person, and seemed to be happy most of the time. She had effervescence about her.

“She used to tell a funny story about that, about how it was her habit to go to an Episcopal Church on Sunday and meet the clergy and hand out some tickets to one of her shows,” Beckwith recalled.

“It was a way to get invited to lunch. She went to St. John’s Cathedral in Denver once and Bishop Bill and Barbara Frey happened to be there. Basically, they did as expected and invited her to lunch.”

Frey said that Davis wanted to visit his home. “We wound up having a kind of extended family household community of people who seemed to have ministry gifts we could use in the diocese, so we all lived together in a big three-story house; 17 or 18 of us, depending on when you asked.”

Basically, he said, Davis came to visit and never left.

“She came to visit us on Epiphany in 1976 and, after about a month, we realized she wasn’t visiting and she realized the same thing, that she belonged there. She called her agent and said, ‘Don’t call me for a year, I got a better offer.’”

Frey said Davis shared a bedroom with two other single women and, along with Barbara Frey, “flew out to Hollywood, closed up her house and brought her Emmys and a few files and lived with us, ever since … like a maiden aunt.”

Davis had also garnered two Emmys and Hollywood fame for her role on “The Bob Cummings Show” in the 1950s before being cast as Alice in ABC-TVs “The Brady Bunch,” which aired 1969 – 1974 and continued in reruns, spin-off shows and big-screen movies.

Yet through it all “she was always a church woman and a faithful Christian,” Frey said. “When she moved in with us, for about the next ten to 15 years, she traveled the circuit. She spoke at churches all over the country, giving her testimony about how the Lord reawakened her.

She attended All Saints’ Church in Beverly Hills when she lived in Los Angeles. When a new rector came to the parish, she once told Frey, she went to church saying, “I want to catch his act.”

“He put her in a bible study and she discovered a brand new world,” Frey said. “It was amazing to her and the curiosity just never left her.”

“When she was traveling on the road, doing a lot of dinner theatre and things of that nature, she would always look up the local Episcopal church and get to know the priest. She called them her fly fathers.”

She even volunteered as a page in the House of Bishops during the 1979 General Convention in Denver and at a few subsequent conventions. “For some reason or other, conventions and councils fascinated her,” Frey said.

But others were fascinated by Davis; her iconic wholesomeness transcended ethnic, racial and geographic boundaries and she continued to receive and respond to 30-some fan letters monthly, he said.

“The general public considered her a very wholesome person, and it’s really true, that’s who she was,” he said. “She received fan letters from all over the place … just last week she got one from Russia. Another one came from Germany not long ago. I had to find a translator for that.

During Frey’s stint as dean of Trinity Seminary in Ambridge, Pennsylvania, “students regularly came by the house to ask if ‘Alice’ was home, he recalled.

“When I served as the interim bishop in the Diocese of Rio Grande a few years ago, we were at a little restaurant in Grants, New Mexico. Almost everybody else there was Native American. People spotted her and came over to touch her and lay their hands on her shoulders. It was amazing.”

Davis’s last gig was “a TV-Land special in Los Angeles for cast members of a series of programs, from Roots to the Brady Bunch and so on,” Frey said. “When they honored the Brady Bunch, they passed the microphone around and everyone applauded politely. But when they finally handed the mike to Ann B., she got a five-minute standing ovation. She was surprised. That tells you something about Ann B.”

Yet, some aspects of Davis were definitely un-Alice-like. For example, in the Frey household, “we had a number of small children and she wasn’t sure exactly how to handle them, but she learned,” Frey said.

And, “she didn’t cook at all in the household here,” he added, laughing. “We take turns cooking here. But when it’s her turn to cook, we all go out to a restaurant. When people express concern about that, and say “but on the program you cooked,” she’d respond, ‘Blah, blah, blah — it’s called acting, dearie.”

Ultimately, she was an anchor in the television family that “everybody wanted to grow up in but didn’t. We all had the feeling she raised us,” Frey said. “And if you said that to her, she had a stock reply; ‘But look how well you turned out.’”

Born May 5, 1926 in Schenectady, New York, to Marguerite and Cassius Miles Davis, Ann Davis had an identical twin sister, Harriet, and an older brother, Evans. She was reared in Erie, Pennsylvania, and enrolled in the University of Michigan as a pre-med major, later switching to drama and speech. She graduated in 1948 and appeared in television commercials before she was cast in “The Bob Cummings Show” and “The Brady Bunch.”