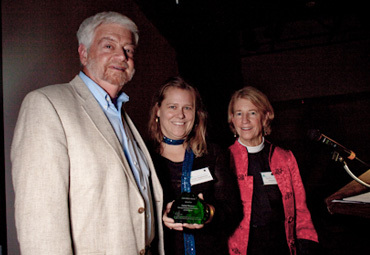 Camp Stevens, the camp and retreat center of the Episcopal Dioceses of Los Angeles and San Diego, was honored on November 10 by California Interfaith Power & Light (CIPL), a faith-based organization mobilizing a religious response to global warming. CIPL honored congregations and church institutions across California with Energy “Oscars” for “greening” their facilities, educating others about climate change, and acting as passionate advocates for Creation.

CIPL founder and president the Rev. Canon Sally Bingham presented an award to Camp Stevens for its efforts to educate the public about environmental stewardship and its programs that teach sustainable farming and gardening practices during the third annual presentation at Grace Episcopal Cathedral in San Francisco.

“Every major faith tradition calls on its followers to be faithful stewards of creation, the web of life that surrounds us, and binds us to each other and to our planet,” said Bingham. “Global warming is a direct threat to creation, and it is our goal to educate and engage our congregants to take personal and collective action to reduce global warming emissions. It is our moral responsibility to protect our planet.”

In accepting the award for Camp Stevens, executive director Peter Bergstrom said, “Caring for our planet has become a major focus of the mission of Camp Stevens. We have made many changes in our facilities, our food service, and our operating philosophy so that we can model responsible stewardship, and we have become a destination for people of all ages to learn about the interconnectedness of all things, and how they as individuals and community members can be more faithful stewards of the planet in their homes, churches, schools and offices.”