Charged with forging a “community blueprint for the next 20 years,” the Los Angeles City Human Relations Commission hosted an April 24 public hearing at City Hall, where speakers including L.A.P.D. Chief Charlie Beck and well-known A.M.E. Pastor Chip Murray reflected on progress since the 1992 civil unrest sparked by the Rodney King verdict. 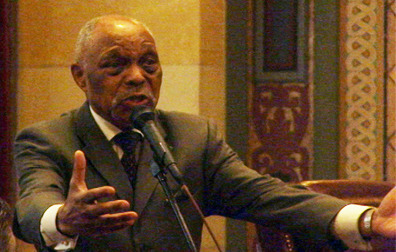 Citing major strides in race relations between the police department and the community, both Beck and Murray pointed to poverty relief and creation of jobs as current priorities.

Veteran L.A.P.D. Captain Philip Tingirides, who grew up in South Los Angeles, connected the dots between the earlier 1965 Watts uprisings, the departure of area businesses, and the ’92 civil unrest. By affirming area residents’ dignity, “we are seeing progress,” he said, citing the importance of current initiatives in elementary and secondary schools. 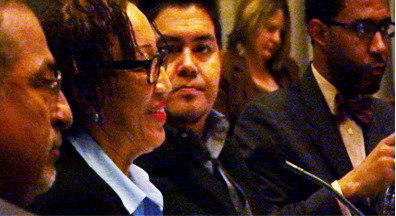 Urla Gomes, second from left, is among civic and religious leaders who took part in an April 24 panel discussion on the 20th anniversary of the 1992 Los Angeles civil unrest. Photo/Chris Tumilty

Gomes recounted the success of the credit union, formed as a direct response to the uprisings, in providing low-interest loans to members who do not otherwise qualify for traditional banking services. “Out of the ashes came our credit union,” which now has more than $6 million in assets, Gomes said.

Panelist Brie Loskota of USC’s Center for Religion and Civic Culture pointed to the challenges faced by faith communities that are rising up to respond to provide social services eliminated by governmental budget cuts. 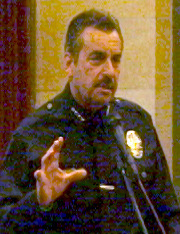 Commission Chairperson Paule Cruz thanked Gomes and the Episcopal Diocese of Los Angeles for their long-standing work in assisting the community. Gomes joins all panelists in contributing to a major report to be published by the commission in 2013.

The diocesan Community Relations Office, serving on behalf of the bishops, is also among advisors to the process.

A reflection by the Rev. Canon Malcolm Boyd, who also shared in the diocese’s response to the 1965 Watts uprisings, is here.