The 123rd annual meeting of the Episcopal Diocese of Los Angeles concluded Dec. 1 after prophetic worship, spirited addresses and a lively panel discussion about housing justice.

Bishop Suffragan Diane Jardine Bruce gave an address focused on New Community ministries, and previewed the budget, which was then presented by Canon Andy Tomat, treasurer.

Near the conclusion of the convention, in response to Bishop John Harvey Taylor’s address on Nov. 30, Ann Seitz, chair of the diocesan Committee on Dispatch, offered three resolutions, reaffirming the work of the diocesan Sacred Resistance Task Force, and renewing the diocesan companion relationship with the Diocese of Jerusalem, as well as accompanying “our brothers and sisters in the Holy Land” for another three years. All three resolutions passed on a voice vote without dissent.

An 8:30 a.m. morning prayer service dedicated to Black Lives Matter, a racial justice activist movement that campaigns against violence and systemic racism towards black people, opened the second day of the annual meeting.

Black and white photocopied images of Black men and women, victims of police shootings, were distributed on each of 70-some tables in the Ontario Convention Center hall; worshippers held them up as the gathering sang a bluesy renditions of “Wadin’ in the Water” and “Kumbaya” in remembrance of those who died in police violence. 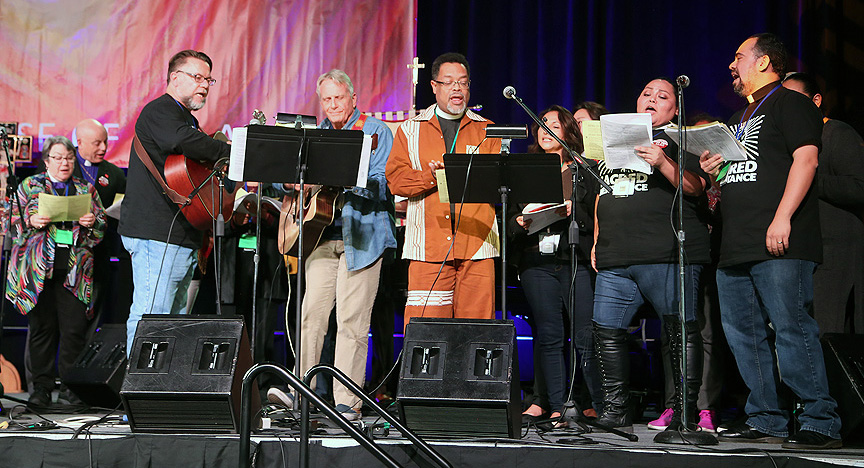 Bishop Suffragan Diane Bruce drew laughter and applause when telling delegates that she hums the Willie Nelson hit “On the Road Again” as she visits not only congregations across the diocese, but other provinces with whom the Southland partners.

In April, she visited the Provinces of Korea and the Philippines which “proved to be quite fruitful, not only in strengthening relationships but in learning from one another.” One huge takeaway, Bruce said, was “the foundational piece of lay leadership training” which, if not undertaken, can stifle church growth. 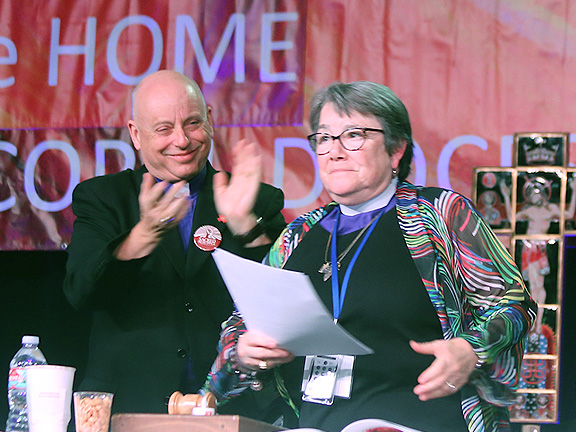 Bishop John Harvey Taylor leads convention in applause after Bishop Diane Jardine Bruce delivers her address, focusing on New Communities ministry and the diocesan budget, which was presented after she concluded her remarks. Photo: Janet Kawamoto

Multicultural Ministries underwent the name change when Episcopal Church Center ethnic ministries staff realized “there is a new community emerging in our churches, given the changing demographics of our neighborhoods.”

Los Angeles has been especially creative in addressing this new community, with immersion programs to acquaint local congregations with their Asian neighbors, and the Gathering, a meetup for faith conversations among Asian American young adults. In January 2019, a Diocese of New York counterpart will meet in Los Angeles “to explore ways to expand the ministry.”

A first step toward a transparent budget formed a core of Bruce’s work this past year. She convened a finance think tank of experts to aid in this effort, along with the Rev. Michele Racusin, diocesan chief financial officer and Canon Andy Tomat, treasurer.

Delegates approved a $9.89 million budget for 2019, detailing a $537,760 deficit. Bruce said the budget will continue to be tweaked as the diocese moves toward complete transparency.

“Marrying the work of the narrative budgets together with these categories and groupings and providing you for the first time how total mission and ministry is funded by the Mission Share Fund, by the Corporation of the Diocese and by Corp Sole, was a labor of love and care,” Bruce told the gathering, adding: “”When I was done with it I felt I’d given birth to an accountant.”

A slide show on the budget presented at convention is here.

Additionally, a panel discussion about homelessness invited delegates to brainstorm and share experiences of and responses to the homeless in their communities.

Tahil Sharma, an adherent of the Sikh and Hindu faiths and a diocesan interfaith minister-in-residence and filmmaker, told convention that he became acquainted with the amazing level of homelessness among college students when he began volunteering and saw former high school friends seeking aid.

Sharma served on the housing justice panel along with: the Rev. Clarke Prescott, interim rector at All Saints, Highland Park; Becks Heyhoe, senior manager of the Orange County United Way’s United to End Homelessness; and Tim Shaw, a former executive director of the Orange County Homeless Issues Task Force and longtime advocate for the homeless.

A video of the housing panel’s presentations is here. 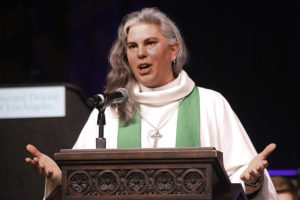 Canon to the Ordinary Melissa McCarthy delivers the sermon at the convention Eucharist on Dec. 1. Photo: Janet Kawamoto

‘Come Home; Be home for one another’

Canon to the Ordinary Melissa McCarthy challenged delegates and the diocese to call out “toxic power and privilege” that is root cause of individual and community violence.

“This toxic power and privilege is abuse. It is power over. It is violent and aggressive. It is silencing and it renders the other visible. It is a daily threat to the abundant life to which we are called in Christ.”

The way to give it up is to become a servant of all, she said. We can achieve this by “understanding that our faith is not an intellectual proposition; it is a way of life. It is Jesus’s way of life.

She said “it’s important that we do the opposite of what our culture is telling us we need to be doing. When it’s fearful, we bring in God’s love and grace and joy. When it is violent and aggressive, we meet it head-on with the peace of Christ. When apathetic and committed to thoughts and prayers, we stir it up. We speak out. We speak the truth to the powers that be.

And thirdly, McCarthy said: “We serve. We really serve. We don’t just give this lip service. Our lives are being spent day by day. Instead of working to get what we want and what we think we want, what we think we need, we shift our focus to serving others. Providing others what they need.

“We give up our defensive rationales and our victim attitudes and we listen, really listen to the need around us and then we respond. We show up … at church to be fed by word and sacrament our strength for the work ahead of us. We show up” in places of need, at the borders, prison, for the homeless and sick, for all who need to know Christ’s loving presence.

Lastly, she said “we love. Beloved friends we have been given such a great gift of the love of God in Christ. We are part of the Episcopal branch of the Jesus movement, uniquely poised to bring together our polarized and anxious world.”

The convention theme, Come Home EDLA, “is to remind us that we are home for one another,” she said. The work we are called to do, can only be done together.

“Please be that love for one another,” McCarthy said. “Be home for one another. Be Jesus for one another. If we can really do that for each other, there is nothing, not a single thing, we cannot accomplish together with God’s help. Come home Episcopal Diocese of Los Angeles … and then go out and change the world into a place of love and grace and home for all.”

The entire Eucharist may be viewed here.

In other diocesan business, delegates elected diocesan officers, and heard presentations from Gabe Vasquez, chair of the Program Group on Youth and Young Adult Ministry, and from the Very Rev. Canon Michael Bamberger, on behalf of Episcopal Relief and Development. An offering was taken for California wildfire relief.

Musical entertainment provided during the convention included: the Rev. David Milligan, associate pastor at St. Paul’s, Tustin, who led a volunteer choir; and N2K, a musical duo consisting of the Rev. Norm Freeman and Katherine Cash.

The 124th annual meeting of the diocese is slated for Nov. 15-16 at the Riverside Convention Center.