A summary of Huerta’s address and a link to a full video is here.

Bishop John Harvey Taylor read a note of support and praise from Bishops Against Gun Violence, for St. Stephen’s Church’s timely and sensitive response to the Nov. 14 shooting that claimed the lives of three students at Saugus High School in Santa Clarita.

“Thank God for your ministry among grieving people,” according to the letter. “We walk together across a wilderness sustained by our hope in Jesus Christ and the good company of those who walk with us.” Bishops Against Gun Violence is a group of nearly 100 Episcopal bishops working to curtail the epidemic of gun violence in the United States.

Delegates also watched a videotaped message from Bishop Guy Erwin of the Southwest California Synod of the Evangelical Lutheran Church in America (ELCA), celebrating the growing partnership between the Los Angeles diocese and the synod.

“We are so excited about the growing partnership between our diocese and the Southwest California Synod regarding theological education,” Erwin said. “Our Lutheran Center in Glendale has offered Bloy House a home in our building and we are very excited about it.

“This is not the usual landlord-tenant relationship; we are hoping to grow together into a deeper understanding of the needs of both.”

The relocation of the Claremont School of Theology to Salem, Oregon, prompted Bloy House to seek a new location after sharing CST’s campus for some 40 years. The school, founded by Bishop Francis Eric Bloy in 1958 as a diocesan institution dedicated to educating both laity and clergy, is also celebrating a name change to the Episcopal Theological School at Los Angeles. 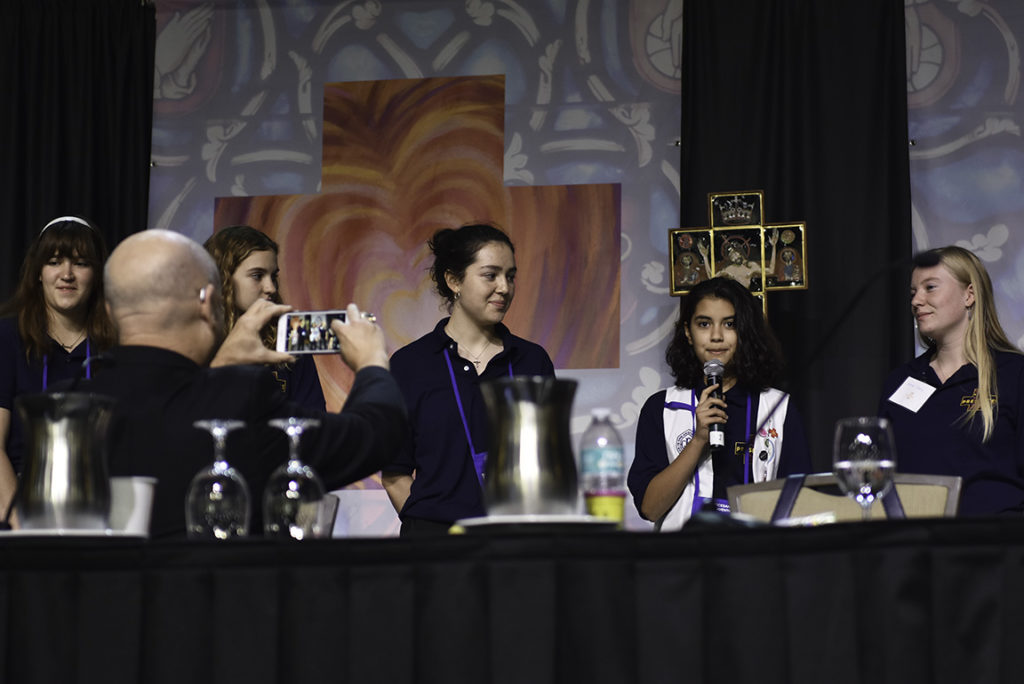 Bishop Taylor snaps a photo as members of the youth corps introduce themselves by name and congregation. Photo: Colleen Dodson Baker

In her address to convention, Canon to the Ordinary Melissa McCarthy thanked Bishop John Harvey Taylor and Bishop Suffragan Diane Bruce and the people of the diocese: “You are an amazing group of faithful people. It is a privilege to be able to serve you. It is also a privilege to work with our diocesan staff. Our staff are dedicated servants, working hard to provide you with the resources you need to do the work God has called you to do.

“They are tireless in their efforts and joyful even in the most stressful of times. They are good humored, light-hearted, and ready to be of service in whatever ways they are called. Our Bishops also, both of them, are anything but ordinary. They are both tireless in their work much like our staff. They set a tone of servant leadership, and they show up. They love you. They care about all of our congregations and clergy and they are always looking for ways we can be of service to you.”

Delegates unanimously approved a single resolution, to continue the work of dismantling racism through 2027. The resolution provides that all lay and ordained leaders receive anti-racism training and engage in ongoing spiritual formation and education focused on racial healing, justice and reconciliation.

Taylor specially recognized the youth and young adults who provided support to convention, as well as honoring Herminia “Mini” Hipolito, the director of the Cathedral bookstore, slated to close at year-end. He also thanked Chris Tumilty for his service. Tumilty has served the diocese as missioner for youth, led youth pilgrimages to the Holy Land, as a communications specialist. He recently accepted the position of communicators director for the Diocese of San Diego. 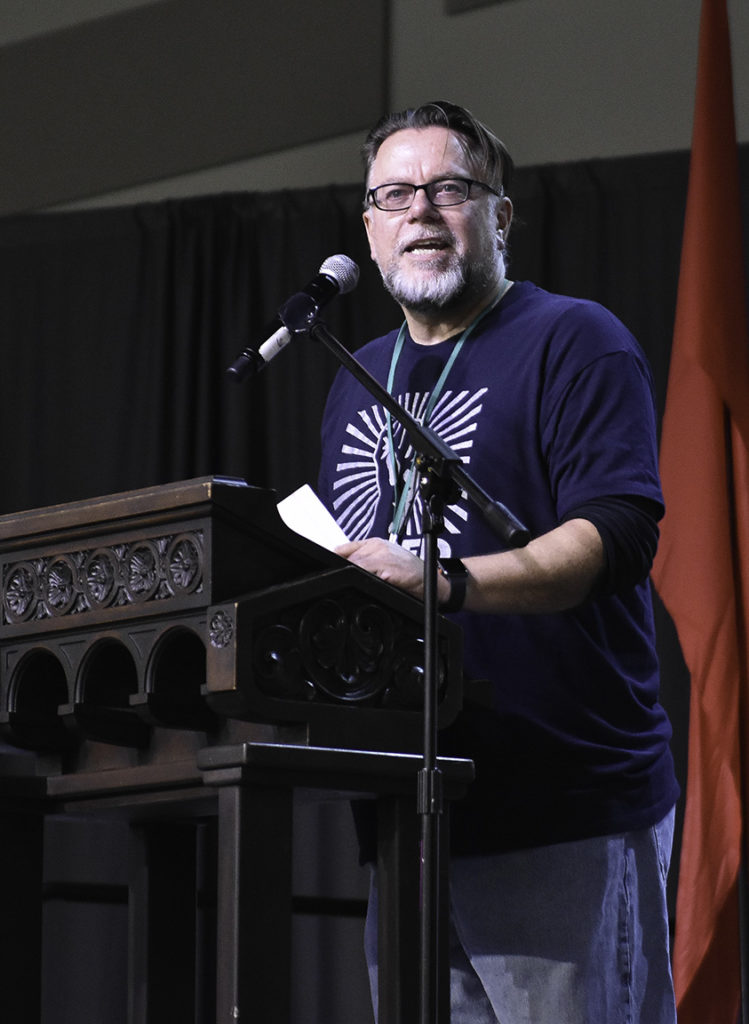 Not sharks, but ‘Fish Tank’

The Rev. Canon Jaime Edwards-Acton, rector of St. Stephen’s Church in Hollywood, facilitated ‘Fish Tank,’ inspired by a popular ABC-TV show in which would-be entrepreneurs present their business plans to several CEOs to enlist support to turn their dreams into reality.

“This is like Shark Tank, but we’re in a Christian space so we’ll call it Fish Tank,” he said. “You need to be compassionate and super supportive of them when they come up here to make their presentations.”

Graduates of the diocesan Social Enterprise Academy, an effort led by Edwards Acton, Betsy Densmore and Jan Cohen, assists congregations in “looking for ways to identify their gifts and develop an entrepreneurial spirit in their community to … generate earned income opportunities and bring them more financial power.”

Densmore said the academy’s commitment “is to make it easier for every church to find ways to fulfill its mission and to generate additional discretionary income so its dependence on plate and pledge is reduced.”

Students came up a host of creative ideas, she said. “Some ideas we’ve seen are a senior day care, workshops of all sorts, ranging from culinary training to stained glass repair. There were ideas about sales of various products. I call your attention to the one of our participants, who is selling tamales. You can sign up for some when you leave.

“Another is going into the flower business and is hoping to build a customer base around all of us who need flowers most Sundays. Really, the ideas are endless.”

Three finalists emerged from a class of eleven churches, to present their business plans to be voted on by convention delegates.

The team from St. Luke’s Church, La Crescenta, celebrates placing first in the Episcopal Enterprise Academy “Fish Tank” competition for its plans to redevelop and extend its campus as an entertainment venue. Photo: Colleen Dodson-Baker

The participants were evaluated based on four criteria:

After an eight-minute sales pitch by each church, convention delegates voted for first, second and third place St. Luke’s, St. Francis and Holy Communion. They received $3,000; $2,000 and $1,000 respectively.

Edwards Acton said the academy is compiling a best practices manual for congregations seeking to create campus entertainment venues. “We hope to make it available to everybody in the diocese. Once we make it available for free to the entire diocese, we’d like to publish it and sell it to other dioceses around the church as a social enterprise itself.”

With Taylor’s blessings and support: “I would like us to build the academy into an institution of the diocese, offering, coaching, consulting, how to invest. We’re looking for entrepreneurial folks, business-minded folks, investors with a particular lens that see how important it is to look at social enterprise through a social justice and equity lens.”

A video of the presentations, followed by the convention Eucharist, is here. 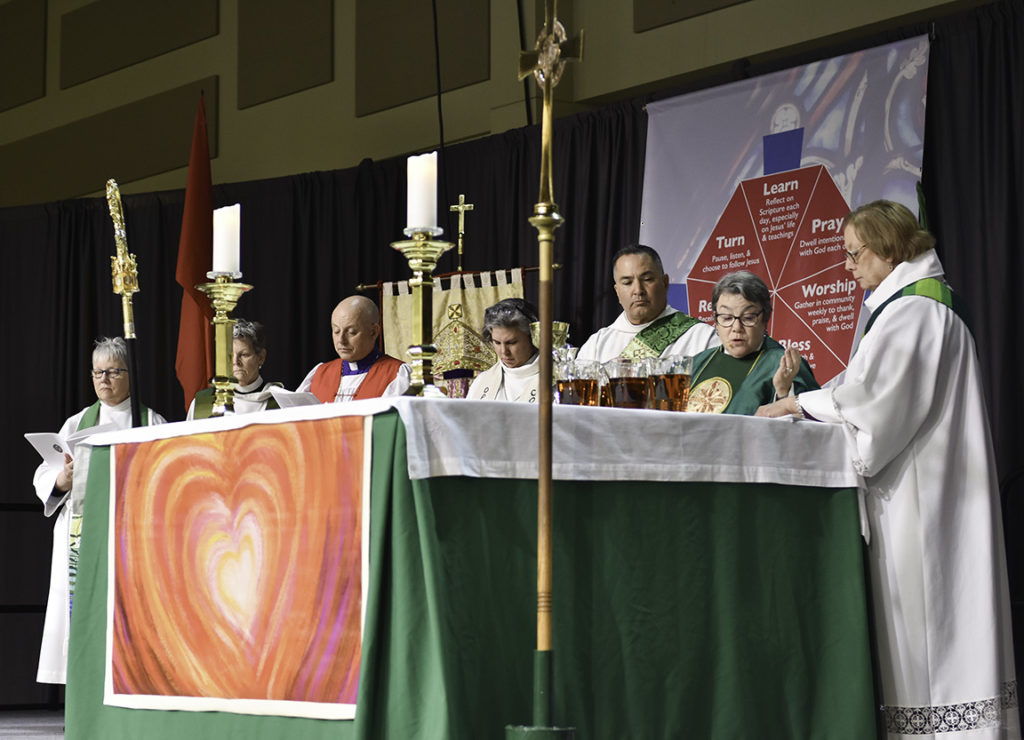 The Rev. Canon Susan Russell, preaching at the closing Eucharist, also urged delegates to “Go. Cross boundaries. Listen deeply and live like Jesus” and continue a lifelong journey on the Way of Love.

She echoed previous themes, such as in “the gospel according to Margaret Mead: never doubt that a small group of committed people can change the world, indeed it is the only thing that ever has.”

She pointed to progress in the area of empowerment, inclusion and social justice, noting that diocesan convention elected four women deputies, a woman first alternate and that six of the eight elected are first-time deputies to General Convention.

“We are a diocese that is choosing the new way.”

She added: “It has been such a deep joy to have, over and over again, had the high honor of being part of this work in this church in this world as we’ve gathered, convention after convention to discern new ways the Holy Spirit is calling us to follow and … to say yes when Jesus says ‘Go.’

The next meeting of Diocesan Convention will be held Nov. 13 – 14, 2020 at the Riverside Convention Center.

A photo gallery of scenes from convention will be posted on the Episcopal News website.

The Rev. Canon Pat McCaughan is senior correspondent for The Episcopal News and vicar of St. George’s Church, Laguna Hills.