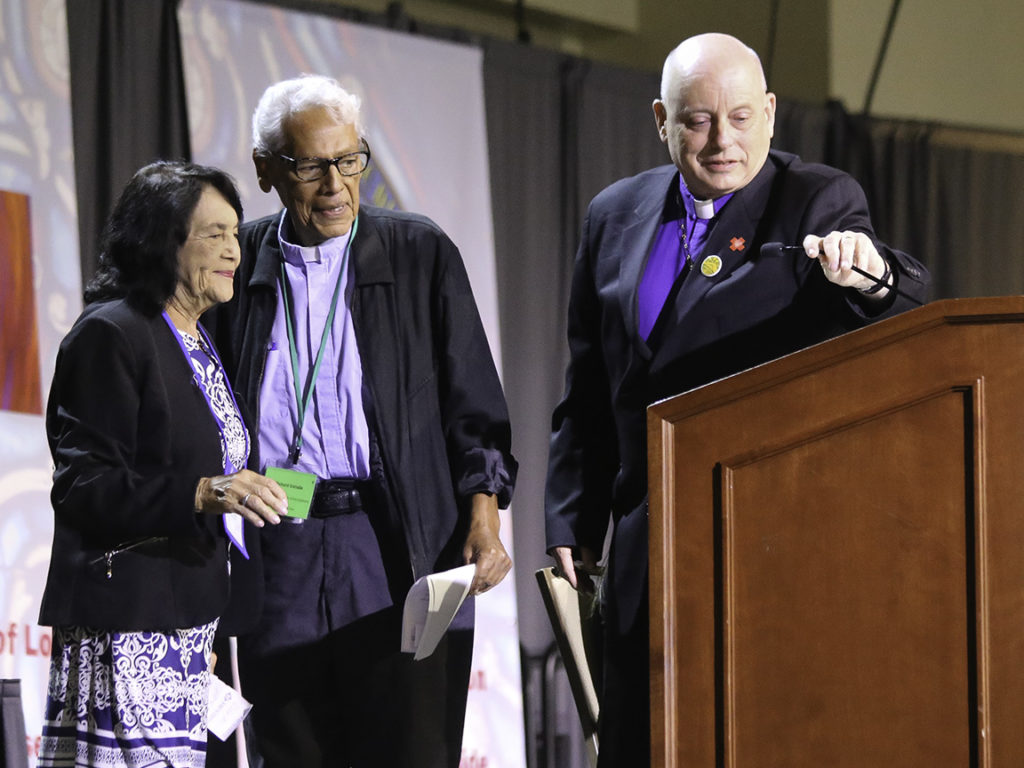 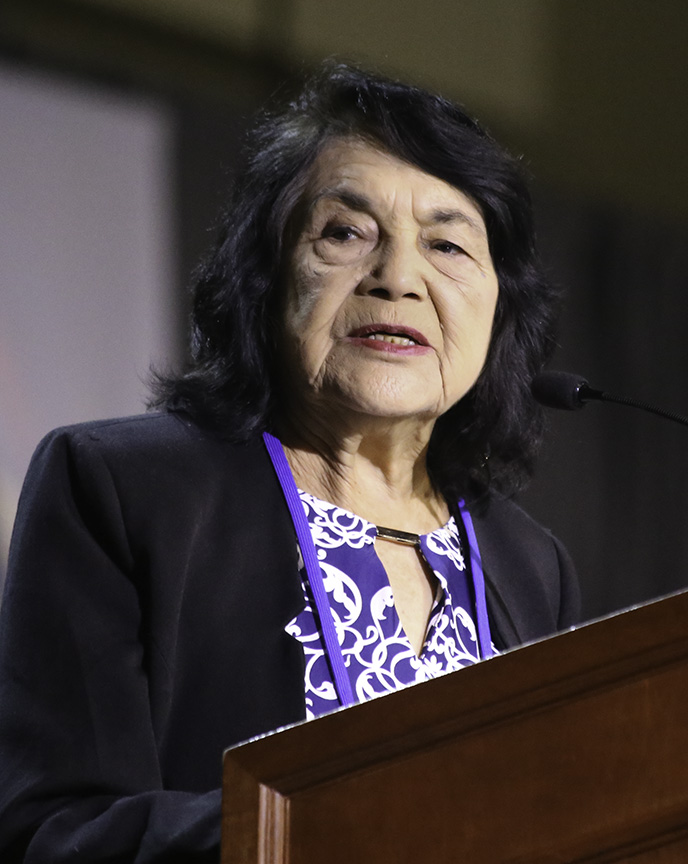 LEGENDARY LABOR ORGANIZER AND CIVIL RIGHTS ACTIVIST DOLORES HUERTA galvanized some 800 delegates and others Nov. 16 at the 124th annual meeting of the Diocese of Los Angeles, leading rousing chants: “We’ve got the power” and “Si se puede! Si se puede!”

And she brought petitions to be signed.

“As you leave the gathering here today you can go out there and help us sign a petition that will bring $12 billion into the California educational system,” Huerta told delegates. “We’re going to ask the large corporate property owners to pay their fair share of property taxes. This is easy!”

“Anyone who makes $3 million or less will not be affected; it’s only for the big guys, okay?”

The series honors Parker, who died in 2007 at the age of 93, an active lay leader and ministry partner with her husband, the Rev. Canon Richard I.S. Parker, who served for 42 years as rector of St. Cross Church in Hermosa Beach.

She was a co-founder of the ECW Today’s Woman events, later named Tomorrow’s Woman, and was named an honorary canon in 2003 by Bishop J. Jon Bruno.

The lecture series, made possible through a bequest from Parker’s estate, honors her life and ministry by addressing topics of peace and justice through the empowerment of women. Presiding Bishop Katharine Jefferts Schori delivered the inaugural address in 2008; the second was given in 2011 by the Rev. Jim Wallis, evangelical leader, author and founder of Sojourners magazine; the third in 2013 by Bishop Barbara C. Harris, first woman bishop in the Anglican Communion; the fourth in 2015 by the Rev. Dr. Renita Weems, theologian, author and AME pastor; and the fifth in 2017 by Bishop Minerva Carcaño of the United Methodist Church California-Pacific Synod.

The Rev. Richard Estrada, founder of Los Jovenes, a nonprofit agency that aids homeless youth, and an assisting priest at the Church of the Epiphany in Los Angeles, introduced Huerta. “As a seminarian, I was on the front lines of the United Farm Worker movement along with Huerta and Chavez,” he said.

He described her as a tireless leader, teacher and activist who didn’t hesitate to advocate for human rights. “I remember her speaking truth to power to politicians who were trying to duck hard decisions and circumvent social justice,” Estrada said.

“She taught us by example. She taught me how to be tough and to stand up for what is right, especially in the face of intransient power,” he said.

Huerta charged delegates with exercising not only spiritual guidance, but spiritual activism, eliciting laughter with: “I’ve heard they go together. You can’t have one without the other.” She urged delegates to start at the beginning, by improving the educational system.

Bishop John Harvey Taylor invited Huerta to deliver the lecture, and Canon Lydia Lopez, a long-time parishioner at the Church of the Epiphany in Los Angeles who organized along with Huerta and Caesar Chavez, coordinated arrangements with Huerta.

Huerta called Estrada “a very, very courageous individual. He has always been such a visionary, taking care of homeless children in LA, helping them get to school, to find housing, jobs.

“And going into the desert – he was one of the first persons that took water into the desert for the people who are trying to cross, making sure that undocumented people had a place not only to sleep but to eat, feeding hundreds of homeless people every single day.” 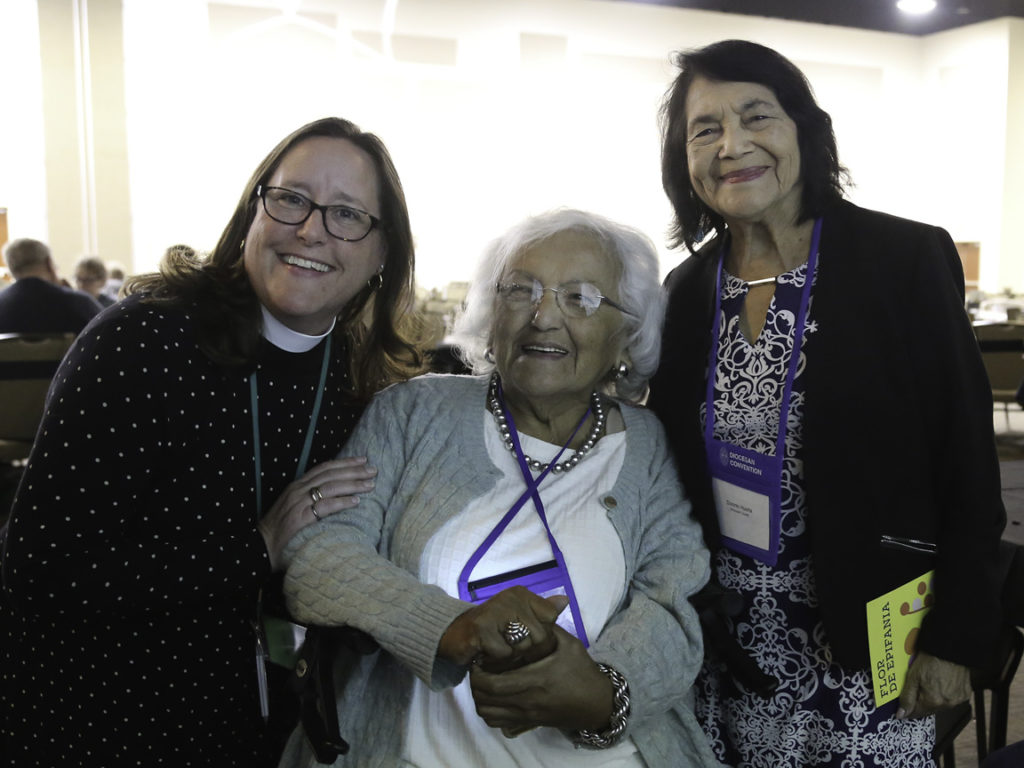 Getting back to basics

Huerta, the daughter of a New Mexico miner and farm worker who won a seat in the New Mexico legislature in 1938, was inducted into the California Hall of Fame in 2013. Two former presidents have singled her out for recognition: in 1998, President Bill Clinton awarded her the Eleanor Roosevelt Human Rights Award and in 2012 President Barack Obama bestowed on her the Presidential Medal of Freedom, the nation’s highest civilian award.

Six schools—four in California—another in Fort Worth, Texas and a high school in Pueblo, Colorado, have been named in honor of Huerta, a former teacher.

In remarks frequently interrupted by applause and laughter, she urged delegates to join her and “to fortify ourselves, to take on the issues challenging our society, country and world. We have to start with the basics and start thinking about what we as institutions, as individuals, can do to erase some of the wrongs happening right now.”

Teaching “the true history of the United States…what isn’t in the school books” is the way to take on such challenges as racism, gun violence, education and salary inequity, she said.

For example, she said, children should be taught that slaves built the White House and the halls of Congress.

And children should learn that people of color, immigrants from Mexico, India, China, Japan and elsewhere built the nation’s infrastructure, “so they should never feel like outsiders. And then our Anglo children will not be fed with that poison of white supremacy and white privilege.” 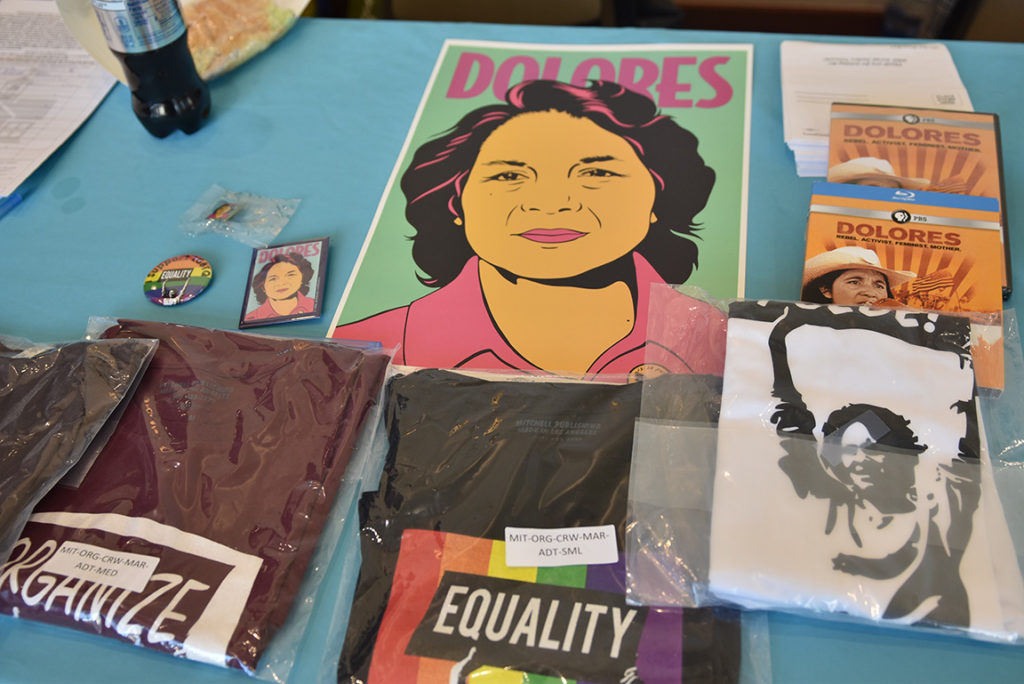 Staff from the Dolores Huerta Foundation brought petitions for convention-goers to sign, along with some mementos of the legendary civil rights leader. Photo: Colleen Dodson-Baker.

Children must be taught “that we are one human race. We have a lot of different ethnic groups, cultures, nationalities, but only one human race, … and that human race began in Africa,” she said. “So we can say to all of those people in the Ku Klux Klan, the white nationalists; you’re Africans. Get over it.”

That, Huerta said, means “We’re all related.” She invited delegates to take the hand of the person beside them and say, “Hello relative.”

“You’ve got to start spreading this message,” she said.

About the wall that President Trump said he would build along the “Colorado border,” she said: “I think he was looking at a map of the United States from 1847. If you go to Google, and google maps of 1847, it’s going to be kind of shocking. When you look at the map of the U.S. in 1847, you will find that one-third of the United States was Mexico.”

And although Russia has come under heavy international criticism for invading and seizing land in Crimea and the Ukraine, she said, “this is what the U.S. did to Mexico.” 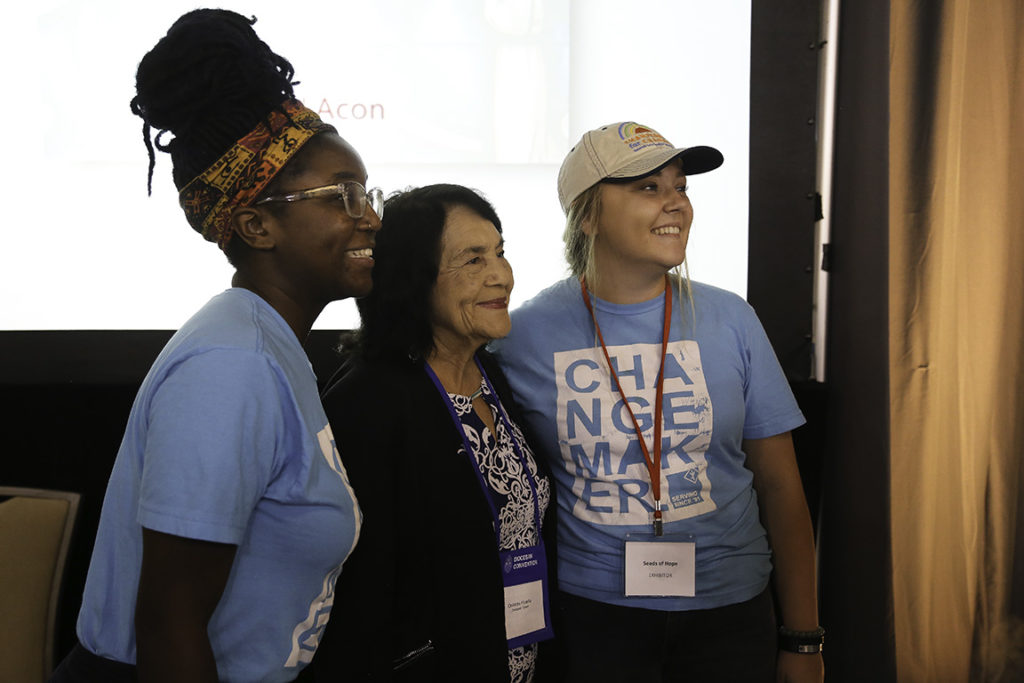 Members of the diocese’s Seeds of Hope food justice ministry staff pose with Huerta, who lingered after her lecture to meet admirers. Photo: Janet Kawamoto

She called upon delegates to work to eradicate racism, to protect labor unions and advocate for social justice and women’s empowerment.

Leadership is present in every community, she said, citing a woman who wanted her children’s school to have a new gym. The woman and her husband circulated a petition to pass a bond issue; it succeeded, and the gym was built. Afterward she was elected to the school board.

“When she got elected, the principal wanted to do away with the school breakfast program,” Huerta said. “She got rid of the principal and kept the program.”

Such organizing begins with the basics, she said. “Go and have house meetings. Talk to folks. Find out the issues. Make an action plan, Volunteer to do the work.

“We have sued our high school district because of their large expulsions of African American and Latino American students. We had 2,600 students expelled in one and a half years. 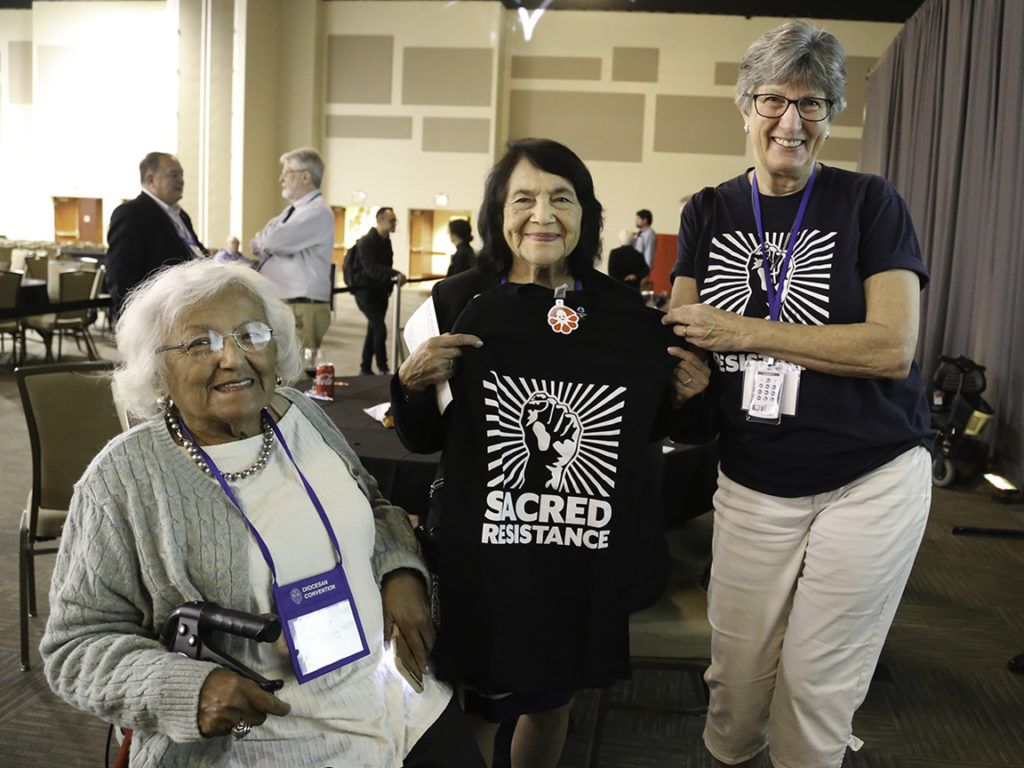 “I’m glad to say that after the lawsuit, expulsions dropped from 2,600 students in one and a half years to 26.”

The now-legendary 1965-1970 UFW-backed grape boycott began with just 40 farm workers who left Delano to go to New York City to learn how to strike, she recalled.

“In one and a half years, through the efforts of those 40 farm workers, talking to people, 17 million Americans boycotted grapes.”

She urged participation in the upcoming census and getting reluctant community members involved, “Go door to door and tell people, ‘please, you have to participate in the census. If we do not get counted we will lose millions of dollars.’

“The only way we can make things happen is by all of us working together. We have the power.”

A video of Huerta’s address is here.

The Rev. Pat McCaughan is senior correspondent for The Episcopal News and vicar of St. George’s Church, Laguna Hills.