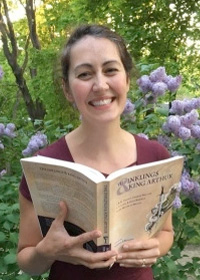 The Southern California C.S. Lewis Society will present The Pacific Inklings Festival and General Meeting on Saturday, March 9, 9 a.m. – 3 p.m., Heath Building 100 and The Great Commission Hall at Vanguard University, 55 Fair Drive, Costa Mesa. The event will feature “merchants of rare and exotic wares,” according to the announcement. Admission is $5. Cosplay (wearing costumes related to the theme) is encouraged.

Keynote speaker will be Sørina Higgins, editor of The Inklings and King Arthur, whose topic will be “The Inklings Among Other Arthurs.” Other speakers will explore more about the Inklings, an informal group of scholars associated with the University of Oxford who met from the early 1930s to late 1949. These literary enthusiasts, who praised the value of narrative in fiction and encouraged the writing of fantasy, included C.S. Lewis, Anglican apologist and writer of a wide range of popular theology and fiction books, including The Chronicles of Narnia, The Screwtape Letters and Mere Christianity; and J.R.R. Tolkien, classical scholar and author of the epic trilogy The Lord of the Rings.