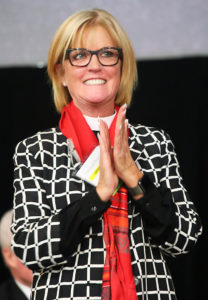 Michele Racusin smiles as Bishop John Harvey Taylor introduces her to the diocese as its new chief financial officer during his 2017 convention address.

The Rev. Michele Racusin says she is “still getting my feet wet” since she became chief financial officer for the Diocese of Los Angeles in December 2017.

Moving to the Southland from Fresno, in the Diocese of San Joaquin, where she had served several congregations, actually was a homecoming for Racusin.

“I grew up at St. Peter’s, Santa Maria, where I was married and confirmed and buried my parents and a sister, and I have a long history there,” she told the Episcopal News recently.

Included in that history was a powerful call to the priesthood at age ten, before women’s ordination was possible in the Episcopal Church. “It took a while,” Racusin, 60, acknowledged. “I felt that God was saying ‘no, not yet. Just wait.’”

She prepared while she waited, becoming a certified public accountant and working for a big-four accounting firm.

She continued working as a CPA even after she felt the time had come to pursue ordination. By then the Episcopal Church was ordaining women but the Diocese of San Joaquin wasn’t. “Women could be deacons, but not priests,” she said.

Undaunted, Racusin attended seminary there, eventually taking weekend courses at Grace Cathedral in San Francisco. She was the first woman in the diocese to complete the process for ordination, and was ordained a deacon in 2004.

She adapted the nearly 200-mile drive to San Francisco into mother-son time. “It was like a great adventure.” She’d start out on the road at 3 a.m. in her two-seater sports car. Each of her four sons accompanied her at various times, the ride-along allowing for heart-to-heart conversations.

She has been married 34 years to Samuel, a retired Los Angeles County probation officer. “When we met, I told him that one day I was going to be a priest,” she recalled laughingly. “I thought, I might as well cut this off after the first date.”

Samuel had actually considered being a rabbi, but instead eventually converted to Christianity from Judaism.

Their sons now range in age from 22 to 28. Jacob, 28, is part-owner of a San Francisco bar. Eli serves as a military intelligence officer in the U.S. Army. His twin, Elliott, lives at the couple’s home in Clovis while working on a master’s in business administration degree at Fresno State University. The youngest, Jonathan, is studying film at San Francisco State University, she said.

Ordained to the priesthood in 2005, Racusin has served as a deputy to General Convention and as rector of Holy Family Church, Fresno. She led the congregation through a move to St. James Cathedral after the property was returned to the Episcopal Church. A breakaway group that had left the denomination had tried to hold onto the property, but the courts ruled it was held in trust for the Episcopal Church.

Despite the difficulties of those years, Racusin views it as a time of rebirth, of opportunity, of recognizing the importance of faith and community.
The continuing Episcopal diocese in San Joaquin “was a small group of people, relatively speaking, a lot smaller than what the numbers were in the diocese at the time of the schism, but its people were so focused and determined on knowing that God loves everybody,” she said.

Despite differences, they shared a common bond and love for the Episcopal Church. “There were different politics, differences in the way people worshipped, but what held them together was this love they had for one another and for God and it was an experience that was absolutely amazing.”

And the schism ended years of isolation from the larger church. It opened up a wave of support and love that was “absolutely incredible.” she added. San Joaquin Episcopalians are still grateful for the leadership and guidance of interim Bishops Jerry Lamb (retired diocesan, New Mexico) and Chet Talton (retired suffragan, Los Angeles), she said, adding, “The schism allowed us to become part of the Episcopal Church.”

Now she is happy to be part of the Los Angeles diocese. “I love the size and diversity of this diocese,” she said. “You can do so much ministry here. I thought, wow, what a great marriage, of being a person who understand finances and has an understanding of the church.”

She wishes more institutions taught church finances to seminarians and clergy, and serves as a member of the finance faculty of the Church Pension Group’s CREDO Institute. CREDO offers clergy and laity opportunities to reassess and transform their spiritual, vocational, financial, and physical/psychological wellbeing.

Racusin also hopes to help make diocesan finances more accessible and perhaps eventually to teach seminars for congregational treasurers.
She has been working intensely with Bishop Suffragan Diane Jardine Bruce and diocesan treasurer Andy Tomat to prepare the diocese’s 2019 budget. Changes in financial reporting will be evident at the upcoming 123rd annual meeting of the diocese Nov. 30 – Dec. 1, at the Ontario Convention Center, she said.

“We’re redoing the way our financial statements are presented. There are revisions of the budgeting process, with one of the goals being the people doing ministry should submit their own budgets and take ownership of their finances for their mission area,” she said.

“We will show how Corp Sole has historically supported the mission and ministry of the church … and that mission drives finances, not the other way around.”

Additionally, she likes sailing, boating and hiking — she and a son walked the Camino de Santiago a few years ago, something she encourages everyone to do if physically able.

She is a lover of creative liturgy, Taize and teaching. “It’s really important to teach our faith,” added Racusin, a former Education for Ministry mentor. She also developed a curriculum and taught it in the school of deacons in the San Joaquin diocese.
Occasionally, she serves as a supply priest at various diocesan congregations. Recently, some former parishioners made the five-hour drive to hear her preach at St. Mary’s, Lompoc.

“Michele is a true spiritual leader,” said Maureen Cook. Racusin is a gifted teacher, preacher and creative leader who oversaw the building of a labyrinth at Holy Family Church in Fresno. It was both an outreach to the community and an inreach to the congregation, she said.

“She is such a forward thinker, such a driving inner force to not only do well in her job but to help others around her do well,” Cook said. “She’s so bright. I was her senior warden for three years and I got to see behind the scenes, the stuff she would do, the time she would put in that people don’t even realize.”

Barbara Wade agreed. She said Racusin served tirelessly, customarily leading four services, teaching Education for Ministry and other classes, all while a wife and mother and being present to her congregation.

“When my husband had surgery, she was there,” said Wade. “She came to our house the night before to say prayers for him. When my daughter’s husband passed away suddenly she was there. Those are things you don’t forget. She preaches the Gospel without words.”