The Diocese of Los Angeles celebrated a sense of plenty at the Dec. 8 meeting of Diocesan Convention, meeting with the theme “Serving Together in Abundant Vineyards.” 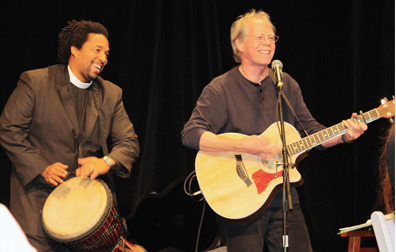 Although held in an unfamliar venue — the Orange Show in San Bernardino — the convention breezed through its one-day agenda comparatively quickly, while celebrating the Eucharist, electing officers, considering resolutions, approving the 2013 budget and hearing a variety of reports on the business of the church in the past year, including the triennial General Convention of the Episcopal Church, held last summer in Indianapolis.

Bishop Suffragan Diane Jardine Bruce, assisted by Bishop Suffragan Mary D. Glasspool, chaired the meeting in the absence of Bishop J. Jon Bruno, who was briefly hospitalized with a case of flu. (He returned home on Dec. 9 and has recovered completely.)

The convention approved the budget submitted by Diocesan Council, and considered three resolutions. The first, calling for continued support for the peace process in the Holy Land, leading to a two-state solution, was passed with one amendment. The second resolution, which proposed a study of alternatives to the Church Pension Fund, in which most clergy and lay employees of the diocese are vested, was overwhelmingly defeated. The convention approved the third resolution, which requested that the Rev. Peter Williams Cassey, African-American deacon, social reformer, educator, church planter and pastor, and his wife, educator Annie Besset Cassey, founders of St. Philip’s Church in Los Angeles, be added to the diocese’s calendar of commemorations, and that their names be submitted to the wider Episcopal Church for inclusion in Holy Women, Holy Men, the church’s official calendar.

The following were elected to diocesan offices:

Commission on Ministry (oversees formation and ordination of clergy in the diocese): The Rev. Allison English, Hank Gatlin

Diocesan Council (elected lay and clergy representatives from each deanery and at-large who oversee the programs of the diocese between meetings of convention): The Rev. Deacon Margaret McCauley, Kenneth Livingston

Standing Committee (provides advice and consent to the bishop on property issues and other legal aspects of the diocese): Betty Ferrell, the Rev. Melissa McCarthy.

A full convention report will be published in the Winter 2013 issue of The Episcopal News magazine, due out Dec. 19.