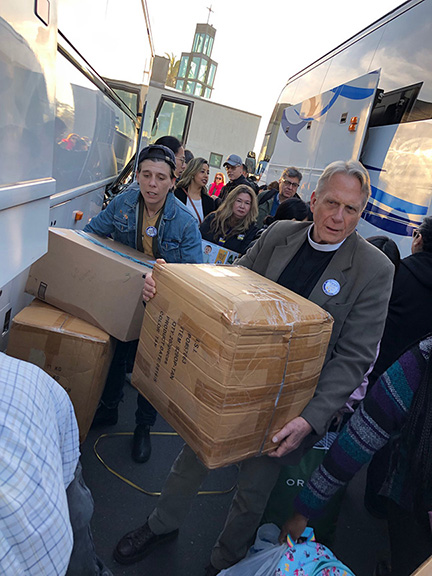 Celeste Dupuy-Spencer and Thomas Carey, vicar of Church of the Epiphany, Los Angeles, help move donated supplies from bus to bus in Chula Vista before the “Faith Caravan” went on to Tijuana.

“If you know, you love,” Los Angeles Bishop John Harvey Taylor said in an emotional Facebook post after speaking with numerous people confined to the refugee camp. “Our government’s policy of slow-walking their asylum hearings, claiming falsely that the system is overwhelmed, expresses an official inclination to view them as a whole, as an aggregated Other, rather than as unique, precious individuals.”

Taylor was among the dozen or more Southland Episcopalians who joined the Dec. 22 ‘Faith Caravan’ of 150 clergy, healthcare professionals, social workers and union members to the U.S.-Mexico border.

“As a nation, we are covering our ears — and yet still the Spirit sings,” he wrote. “‘‘Do you hear what I hear? A child, a child shivers in the cold.”

For the Rev. Greg Kimura, rector of St. Andrew’s, Ojai, the trip was a heartbreaking humanitarian crisis and a stunning reminder of past injustice.

“I have to laugh bitterly about the fact that the president is saying these are terrorists,” he told The Episcopal News recently. “There are no terrorists there. People were absolutely frightened, hungry, cold, fleeing violence and other bad situations in their home countries; Honduras, Nicaragua, El Salvador.”

Kimura joined the relief caravan “as a priest, an individual and a member of Episcopal Sacred Resistance, the diocesan Sanctuary Task Force, to see what it was really like,” he told The News. “It’s truly a humanitarian crisis and a crisis where no government is taking any responsibility.”

The camp has transitioned from housing cattle to warehousing people, Kimura said. “It was a real eye-opener. It was body packed next to body. No electricity, no heat. Everybody lived in pup-tents and those pup-tents were all on shipping pallets. The whole place had been overflown by sewage” and many people were sick, he said.

“It was something that reminded me chillingly of my own family, incarcerated in internment camps in World War II,” added Kimura, who is Japanese-American. He described inhumane and unhealthy conditions, mistreatment and mismanagement. “There’s no security. It’s filthy. The people are packed body to body. The families are housed in one place and married people in another place. But when the lights go out, you have to imagine that people are really, really vulnerable.”

Many flocked to clergy for prayers and blessings, he recalled.

“It reminded me of the biblical stories when Jesus is walking through a crowd and infirm or ailing people wanted to reach out and touch his cloak,” Kimura said.

“It wasn’t so much my blessings,” he added. “It was more that they just wanted to be physically touched. They wanted to be told God loves and remembers them even when the rest of the world and the news cycle has moved beyond them.” 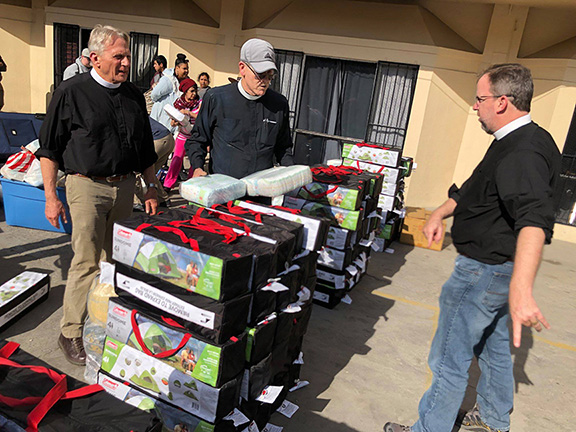 The trip was sponsored by Clergy and Laity United for Economic Justice (CLUE) and the Service Employees International Union (SEIU) public service workers union. Three busloads of clergy from a variety of denominations, nursing and mental healthcare professionals and social workers participated, according to the Rev. Robin Denney, associate rector for Christian formation at St. Cross, Hermosa Beach.

They took with them supplies, tents, diapers, food; “the things the people in the camp had requested. Our idea was to be a pastoral presence, an encouraging presence,” Denny said.

In spite of the adverse conditions — “They told us about how seven children had already been hospitalized from the camp,” she said — there was a palpable spirit of courage and endurance “in just hearing what they’d been through to get there and hope for having a chance to present their case for asylum.

“The people were helping each other. I was really moved by the incredible outpouring of support from people who live in Tijuana,” Denney added.

“Mariachi bands came from the local community to encourage them and to play music. Another man dressed up as Santa Claus and was entertaining the children. A person we spoke with talked about how she was helping to coordinate people to move out of the camp into temporary housing with churches in Tijuana.”

And, she said, the ineffectiveness of the immigration system was painfully clear when the group visited “a Baptist church that day still harboring people who had come from Haiti a year ago and who were waiting for the opportunity to have an asylum hearing in the U.S.,” Denney added.

Given the season, “Christmas was very much on my mind,” she said. “We met a woman who was maybe seven months pregnant. She and her husband told us their story. It’s hard not to make parallels to Mary and Joseph not being able to find room at the inn.

“Another woman I met had been separated from her baby. She was very emotional. I asked if she hoped she might see him again. She said, ‘My hope is in Christ.’ Her voice changed. She had a rosary around her neck and grabbed it when she said it.

“There was just the sense that Jesus knew what it was like to fear for his life and be a refugee from the time he was born. The people feel that presence with them. They feel Christ’s presence with them. His strength and hope is what keeps them going. And we’re called to be a part of that, to seek and serve Christ in all persons.

“It’s pretty hard not to see Christ in the face of refugees.” 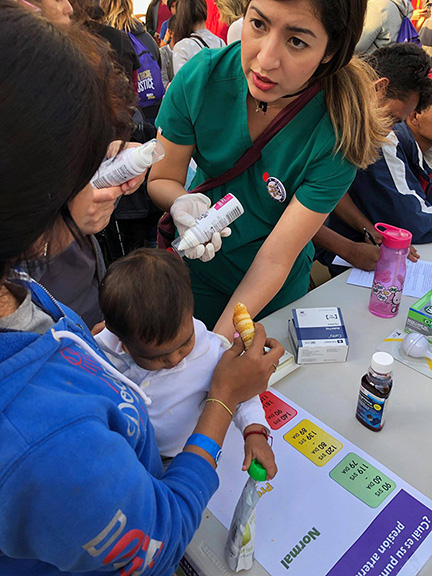 A volunteer health professional treats a child at a Tijuana migrant camp.

For the Rev. Mike Kinman, rector of All Saints, Pasadena, the “biggest takeaways” from the trip were the outpouring of love on all sides, from visitors and refugees, and the opportunities to help.

“Love is more powerful than any of the obstacles we are facing,” he said. “So, how do we remove obstacles so that love can rule the day?”

While the power of presence and witness is palpable, he said, All Saints is wrestling with “instead of going there and starting from scratch, how can we work with organizations already there, already doing incredible work?”

Like Al Otro Lado, (“On the Other Side”), a nonprofit legal services agency that aids migrants and asylum-seekers.

“We invited their legal director, Nora Philips, to speak at our rector’s forum,” Kinman said. “They are doing incredible work on both sides of the border and they have been there for a long time and so we’re looking at how we can support that work.”

He added: “What I don’t want us to do is, out of our desire to go over there and serve, to just create more difficulties, and to have good intentions turn into something that is not as productive as it could be, or even counterproductive.”

An idea under consideration, he said, is sponsorship of a legal fellow to aid Al Otro Lado’s efforts. “If it would cost $60,000, the question is, could we get a bunch of faith communities to chip in and sponsor someone who could permanently be across the border, helping?”

Alton, provost of the Cathedral Center, agreed that relief efforts must be practical and productive.

The trip was filled with minor challenges, easily overcome. A truck to carry the food and medical supplies didn’t show up; the supplies were packed onto buses. At the border, they were ordered to unload all the supplies and then reload them on the bus, creating a significant time delay.

In Tijuana, a mobile health unit, supposed to operate inside El Barretal, wasn’t allowed inside the facility; medical professionals were forced to hold the clinic outside.

“It’s part of the realness and the immediacy of the situation,” Alton said. “It’s hard to predict a lot of those things because it just depends on who’s at the customs desk and how they’re feeling that day.”

He said there is a collective, broad-based energy to continue to engage the humanitarian crisis on multiple levels and those next steps are currently under consideration. Another trip is planned for February.

“I am pretty convinced there will be additional groups related to this one going back,” he told The News. “It helps that we can work together and not at cross purposes or reinvent the wheel.”

Because, he said, the crisis isn’t going anywhere.