From the bishop: Arming ourselves with the power of love and justice 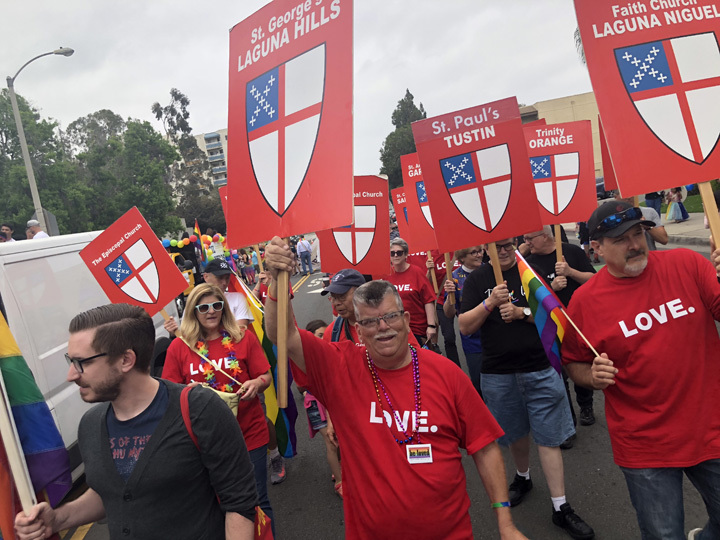 The tribe wore red at the June 22 OC Pride parade.

For our celebration of Holy Eucharist at Messiah, Santa Ana on June 22, the morning of Orange County Pride, our liturgist, the Rev. Kay Sylvester, selected the passage from 1 Samuel about David going to war against the Philistines. In Sunday school in bygone days, it was the ultimate battle between good and evil.

So as preacher, I was conscious of a dilemma. I had just read a column by David Brooks of The New York Times in which he argued that in our society, competitive virtues are overwhelming cooperative ones. Religion, which transmits values in the ambiguous form of parable, is receding. Mythos — stories of existential struggle between light and shadow, from “Star Wars” and “Black Panther” to video games — is on the ascendant.

“[Competitive virtues] tend to give short shrift to relationships, which depend on the fragile, intimate bonds of vulnerability, trust, compassion and selfless love,” Brooks wrote. “They tend to see life as an eternal competition between warring tribes. They tend to see the line between good and evil as running between groups, not, as in parable, down the middle of every human heart.”

Assessing our deeply polarized society, Brooks is of course on to something. My dilemma was preaching appropriately about the mythos-drenched story of David and Goliath. Jesus would have wept at the big guy’s death. But the paradox of righteous weakness defeating unjust strength would have been right up his alley. My solution was to reframe the story as a parable Jesus might have uttered: “The Kingdom of God is like a soldier who was too small and weak to wear his king’s armor and went into battle armed only with five smooth stones and the power of love and justice.”

The OC Pride service presented yet another dilemma. Brooks warns us against the dangers of tribal thinking. But as often happens when I’m among my fellow Episcopalians in the Diocese of Los Angeles, we 50 gathered for worship before Saturday’s parade felt exactly like a tribe. By and large our signifiers and unifiers are the prayer book, our love for God and one another, and our belief in Jesus’s inclusive, egalitarian heart. Within Christendom, we’re small but hearty.

We don’t agree on everything, of course. Soon we your deputies head to Austin for General Convention. We’ll debate issues ranging from gun violence and immigration to Israel-Palestine and marriage rite equity. Especially when we’re confident we’re doing what Jesus wants, our temptation will be to give in to us v. them thinking, to look for that “line between good and evil running between groups.” May we arm ourselves more or less like David, with the sword and shield of forbearance, love, and justice — and five smooth, gracious talking points.