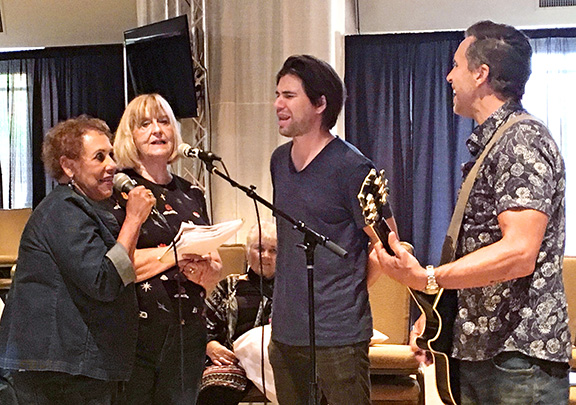 At Rock to Recovery (from left), Willie Munoz, Ellie Brokaw, Matt Bartosch
and Wes Geer sing ‘Faith,’ the song they and others created together.

Wes Geer of Rock to Recovery invoked the healing power of music to create a band in a day on Oct. 6 at St. George’s Episcopal Church in Laguna Hills.

Within the space of a few hours, with a handful of drums, rattles, guitars, tambourines, an electric keyboard and guitar, voices and other instruments, with prayers and willing participants, the group became the “Transformation” band. And, a segment at a time, they created and recorded a song, “Faith.”

Geer’s creative approach is music therapy and more. He formed Rock to Recovery on Dec. 12, 2012, as an outgrowth of his own drug and alcohol rehabilitation journey. The Southland native was guitarist with the rock band Hed P.E. and the nu metal band Korn. Along the way, he realized music could be a vehicle to promote healing in the recovery community.

Rock to Recovery’s nonprofit entity reaches out to Wounded Warriors and is part of the treatment curriculum for some 60 other rehabilitation programs, Geer said. Aiming to channel energy into creativity, the group also donates its services to state-funded agencies and nonprofit organizations, such as St. George’s.

More than 20 recovery groups meet weekly on the St. George’s campus, and that inspired the church’s Caring Ministry to invite Geer, along with Matt Bartosch, to lead the workshop, according to St. George’s parishioner Ellie Brokaw.

“The caring ministry is a one-on-one ministry that offers support to those facing life’s challenges,” said Brokaw, who along with Willie Muñoz leads that ministry.

“But with so much unrest going on in the larger community, we wanted to broaden our scope and reach out to others,” Brokaw told the intimate gathering of about 20.

She and Muñoz wrote the lyrics and became vocalists for the group’s song “Faith,” inspired by the feelings and emotions of the day.
During introductions, each participant had shared a feeling or emotion he or she needed or wanted to release: fear, anxiety, worry, negativity. And they shared what they hoped to attract: peacefulness, joyfulness, hope, faith.

Those emotions began to form the lyrics for the song.

No musical ability is necessary for Rock to Recovery, Geer said. The day is about fun and learning, new realizations and healing. Because many people believe they have no musical ability, they often overlook the power of music to heal them.

“When I was in recovery groups myself and when people are in those dark places, looking for answers, looking for hope, and feeling so isolated or alone, I noticed that when I played the guitar with people who weren’t musicians, it would bring us all together.”

He added, “We would write songs together, and goof off. Walls were torn down. People came together. I saw the power of playing music with non-musicians and how much it worked.

“When people say ‘I’m not musical,’ I ask them to think about it as if you were three years old and someone put on music. Then what would happen?”

Music exists even in daily casual conversation, he said. “When we speak, there is rhythm, cadence. It is music, even though most of us haven’t spent a lifetime playing or practicing it.

“When we play music, it helps release endorphins, oxytocin, serotonin; it helps repair neural pathways. It can stop all those outside thoughts and can force us into the present moment. It can change old thought patterns that might be negative into new ones. It can actually change the brain’s and body chemistry,” he said.

He recalled a previous session during which someone detoxing from heroin was able to participate and feel healed.

Gwendolyn, a Torrance resident, said she attended the session after hearing about it through a recovery group.

A quick assessment of participants resulted in Geer’s role assignments: Who has rhythm? Who wants to write lyrics? Who wants to make some noise? What musical tempo, what type of energy represents where we are today? Slow? Medium? Fast?

Recalling the intentions set earlier, to let go of fear and to attract faith, the vocalists are ready. Brokaw croons into the microphone,
Help me, I’m afraid.
Of what am I afraid?
The unknown before me.
The feeling starts to fade.

And Munoz breaks in, speaking the words as Brokaw continues to sing the lyrics:
Fear is disabling;
Fear can be useful, a warning;
Fear hides ability to act;
Fear results from a lack of knowledge;
Fear immobilizes;
Fear is the absence of faith.

Another chorus emerges, and the entire band joins in: When we have faith, we can let go …

“Which is what we were talking about today,” Geer told the gathering, adding: “Wait, wait, let’s record the song and I’ll put it online.”