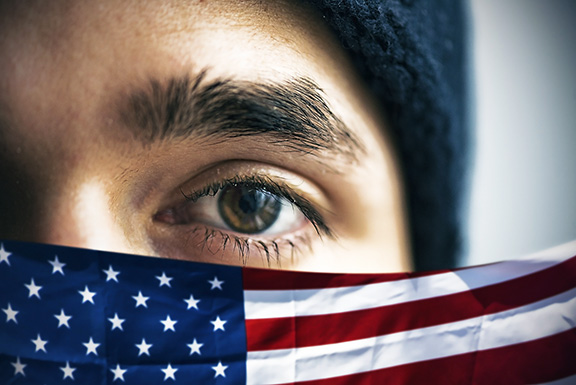 The Interfaith Refugee and Immigration Service of the Diocese of Los Angeles, facing a drastically smaller numbers of refugees and asylum-seekers than in past years, has “pivoted” to seize opportunity from challenge.

“Refugee arrivals are at historically low levels, across the country,” according to IRIS Executive Director Meghan Taylor. “There were years when IRIS resettled 1,200 to 1,400 refugees per year in the Los Angeles-Orange County area.

“That number dipped to around 600 a few years ago, and then to 300 three years ago. This year, we are expecting to resettle as many as 100.”

But, she added: “We are pivoting to remain helpful to our community’s needs and focusing on the immigrant landscape here in our own backyard.”

The reductions, while devastating for IRIS’s budget, are even more challenging for families seeking asylum, who are often stranded and in limbo, Taylor said.

“Our budget is based on our refugee arrivals and as such we have lost many staff members,” Taylor said. “We have gone from a staff of more than 20 to fewer than ten. We are focusing our efforts now on expertise in resettlement case management.

“We have case managers with five years’ experience each of resettling refugees from all over the world. That knowledge and expertise can only be learned through service.”

What the downturn in refugee arrivals means is that families “are stuck. They’re trapped, unable to find resettlement in the U.S.,” Taylor said.

“The U.S. has historically taken the largest percentage of displaced people around the world and that was something the United States has always been proud of,” Taylor said “Now, we’re taking among the lowest numbers.”

Most Los Angeles refugee cases are family reunifications, so now “we’re seeing relatives who’ve been waiting for family members to come and join them. They are pleading with us to do something, to bring their mother or brother here who is still stuck in the Middle East or Central America and can’t get out.”

An Iranian family resettled just last month was delayed several years in Vienna. Although in the final stages of being processed, and despite the fact that they were told they would be in L.A. within six months, they were stalled, and eventually their case — along with about a hundred others — was denied.

“They were told their case was denied for reasons listed as ‘other,’ with no further explanation,” Taylor said.

IRIS referred the cases to the international refugee assistance project, who appealed the rejections. At least one of the families’ cases was reopened, approved, and they arrived recently in Los Angeles.

When greeted by IRIS staff at the airport, the tearful family said they feared they would never see one another again, according to Taylor.

“I had no work permit,” said Farhad, who said the government’s holdup forced him and his family to stay in Vienna for 18 months after their six-month temporary visas expired. (His name is changed to protect his identity.)

“We had to live without any status; we were terrified they might return us to Iran,” Farhad said through an interpreter. The family fled Iran because they are Armenian Christian, a persecuted minority, according to Ruben Alexan, an IRIS counselor.

In order to leave, they sold all their furniture and belongings and, when their money ran out in Vienna, they had nothing. Local churches helped them.

Now, they are ecstatic to have finally arrived in Los Angeles, where extended family members were afraid they would never be reunited.

“We are so happy to be here,” said Farhad. “We can live here freely. My daughter can go to school. IRIS helped us with furniture and kitchen items and contacted other churches to get furniture for them, to furnish our apartment.”

Taylor said another family is arriving in April. “A Syrian family that has been in Lebanon the last three to four years, waiting,” she said. “It’s the first Syrian family we’ve seen in two years.”

“It’s not what this country is built on. We [IRIS] are advocating for a presidential determination of at least 75,000 referrals nationwide for 2020. The ceiling this year was only 30,000, which is the smallest since the Refugee Act of 1980.”

From challenge comes opportunities to grow

Despite staff reductions, IRIS has coped by cross-training three employees to work as Department of Justice immigration-accredited representatives.

Taylor explained that immigration is “one of a few areas where the courts recognize certain trained and accredited, background-checked, non-attorneys in the practice of law. “Now we have three accredited representatives and one immigration attorney on staff and we’ve really been focused on growing our immigration work for the past two years.”

Through a $175,000 contract with the California Department of Social Services, IRIS provides citizenship services, and assists with DACA renewals, asylum, green card, family petition and Freedom of Information Act requests.

“We are also a member of the New Americans Campaign, working across the country to help legal permanent residents become U.S. citizens.

“I think the last census data revealed that just in city of Los Angeles there are a quarter million legal permanent residents who, based on their length of time having green cards, are eligible to become citizens but weren’t naturalizing because of barriers.

“Often, they don’t know where to go or how to get help. But it is important because it is part of an effort to enable people to have a say in the governance of their community.”

Taylor said the agency is also considering the challenging times as an opportunity to consider other gaps in services in L.A.’s refugee and immigrant community, such as mental health access for undocumented communities.

Other gaps include English as Second Language (ESL) classes, and food subsidy and housing programs.

“We are just generally helping people navigate the resources that already might exist in our community, but who don’t know where to go to find them.”

A satellite location at the bungalow near the Cathedral Center in Echo Park is “still coming together” to aid the effort, Taylor said.

Plans in the works include ecumenical efforts to connect asylum seekers released from detention with the community and with congregations and individuals to host them and sponsor them to get out of detention.

Taylor anticipates offering ESL and civics classes at the bungalow office in April. An education and outreach grant from the Robert Ellis Simon foundation for mental health services for the immigrant and refugee community will also fund future work.

“The point is really to educate and engage the community in mental health services through educational workshops and a centralized referral system, with some group therapy or individual therapy,” Taylor said.

“We have seen and heard that there’s a huge gap in ongoing therapy services for largely the undocumented immigrant community,” complicated by lengthy wait lists for languages other than English, she said.

“We’re hoping to address some of that gap through this program,” which will involve a partnership under development with St. Athanasius Church and the diocesan Sanctuary Task Force.

“We’re starting to change services to assist the community well beyond the refugee resettlement program where we started in 2005, when we began, said Taylor, who has led the agency since 2009. “We were originally a refugee resettlement program, then a refugee employment provider, a legal services agency. Now, we’re looking at what the community needs in terms of holistic support. Our mission keeps developing.”

Also, part of the agency’s case load is young Central American minor cases, including some that have been denied by the government.

“These are minors who put their lives at risk by applying for the program and now have an even brighter, bolder red target on their backs by the gangs in Honduras, Guatemala and El Salvador.”

There is a glimmer of hope, however, she says, because “just last week a court ordered the reopening of those cases that were in process but never given an interview. So, we’re hoping that some of our cases … might have an opportunity still to come to the U.S.”

Separated and scattered became a means of survival for José and Julia Fuentes and their five children over two decades as they sought to escape violence and death in El Salvador.

José Fuentes came to the United States with temporary protected status during the violent and bloody days of war in 1990s El Salvador, leaving behind his wife and children. Eventually his sons, increasingly threatened by gangs, individually followed. One is living and working in Minnesota. A daughter sought asylum in Italy.

“There is no life in our country,” Julia told The News through an interpreter. Her son Emerson was increasingly threatened, signs that they needed to go.

“Once, he had on a hat his brother sent him from the United States and gang members held him down and set it on fire while he was wearing it,” she said.

She said gang members threatened Emerson, telling him that he needed to join with them. “He didn’t want to because he had a friend who joined and they put him to the test. They said he had to kill his mother. He said no, I’m not going to do it. And they ended up killing his friend.”

She added: “I am very grateful for this opportunity. I feel so depressed, knowing all my children are all over the place. I haven’t seen my daughter in nine years. It is so depressing. I don’t know the language, it is difficult to defend myself in any situation.”

Without IRIS, she said: “I wouldn’t be here. I wouldn’t be alive at this moment. I love how the program is helping everyone and would love it if they could help more people from El Salvador because life over there is not good. They don’t have no life. There, they make you into little pieces.”