From the bishop: Defying gravity 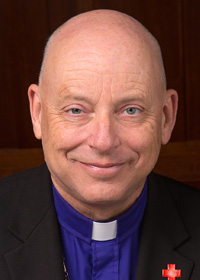 AS WE MARKED THE 50TH ANNIVERSARY of the Apollo 11 landing in July, we saw plenty of old film of the mighty Saturn V taking off from the Kennedy Space Center. It flew 13 times, most of them moon missions. For a few seconds after ignition, it rose almost imperceptibly. It took ten seconds to clear the tower, which means it wasn’t going much faster than an elevator. Within three minutes, 6200 miles an hour. Eight minutes after that, it’s in orbit, kissing the face of heaven, an utter astonishment and marvel, far beyond the reach of any power that might try to bring it back to earth, to foil its magic, to give it dull weight again.

That’s what it feels like listening to Michael Curry, our presiding bishop, preach. The world saw it at the royal wedding, and we Episcopal insiders see it each time he uncoils. He did it again last month at All Saints, Pasadena, during the Union of Black Episcopalians annual conference and meeting. Some propulsive material deep within ignites him. He does careful exegesis and provocative political and cultural commentary (never partisan, always steeped in gospel values) and manages to weave in Sinatra’s “That’s Life” and the old hymn: “On Christ, the solid Rock, I stand, all other ground is sinking sand.” He roars and whispers; we laugh and weep. It’s comforting, demanding, Jesus-drenched, love-struck, justice-fixated, utterly progressive and reassuringly old-fashioned.

Methodism’s co-founder, John Wesley, famously did not say, “I set myself on fire, and they come to watch me burn.” Scholars agree that he would not have called attention to himself in that way. Nor would Bishop Curry. But we do come to see him blast off. Every time I see him, I tell him to take care of himself. Who am I, his mother? But escaping gravity is costly. The Saturn V used up every ounce of its fuel in 11 minutes. His precious vessel is also finite, with two brushes with serious illness in the last four years. Pray for him.

His messages about the Jesus Movement and the Way of Love and the way he proclaims them make him the most important figure in 21st century Christianity. But he refuses to behave the way people of that stature usually do. I don’t think I’ve ever heard the greatest preacher of our age even talk about his preaching. Awestruck as usual, I watched him carefully after his turn at All Saints. After reentry and splashdown, he drank some water, rested for a bit, and then started singing and smiling at the kids gathered around the altar.

He accepts praise gracefully but without giving the impression that he craves it. Meanwhile, in private consultations, he’s focused on his conversation partner — always gracious, incisive, generous with practical advice. He chairs the House of Bishops with amazing deftness (often advised by our own Bishop Bruce, the House’s secretary), displaying the keenest politician’s ability to read the temper of the room. In these settings, it’s always about you, not him. One of closest colleagues told me that those who really know him don’t say that his greatest gift is his preaching. It’s his listening.

That’s leadership. That’s true evangelism in a selfish era. That’s the burning fire of the God of empathetic love. He’s inspiring us all, in all our anxiety about the future of the church and this mean old world, to keep our lamps lit in anticipation of the coming of the Lord and the realm of justice and peace. Godspeed, Michael Curry.