The Rt. Rev. John Harvey Taylor was ordained and consecrated bishop coadjutor of the Diocese of Los Angeles July 8 in a “grand fiesta” of celebration highlighting the diocese’s rich cultural diversity and its focus on mission.

Korean drummers, Chinese dancers and a mariachi band led processions of bishops from across the Episcopal Church as about 3,000 laity, clergy, ecumenical visitors, interfaith guests and civic leaders gathered for the service at The Music Center’s Dorothy Chandler Pavilion in downtown Los Angeles. Another 8,000 watched the celebration by live-streamed video.

Banners representing the diocese’s 140 congregations and institutions lined the pavilion’s entryway prior to the start of the service. Taylor chose the theme “Feeding Hungry Hearts” for both the consecration service and his episcopate, and guests were invited to bring grocery gift cards for distribution to those in need.

Some 20 other bishops attended the ceremony, including Bishop Onesimus Park, Diocese of Busan and primate of Korea; Bishop Joshua Switi Ouma of the Diocese of Maseno East, Kenya; and Bishop Donald Tamihere of the Diocese of Te Taira¯whiti in the Anglican Church of New Zealand. Near the end of the service, Tamihere and five young people from his diocese performed a Maori song and dance to express unity with the Los Angeles diocese, followed by a haka ceremonial dance.

Attending from dioceses in companion relationships with Los Angeles were Enrique Treviño Cruz of the Diocese of Cuernavaca, Mexico; and Dean Hosam Naoum of the Diocese of Jerusalem and the Middle East, representing Archbishop Suheil Dawani. 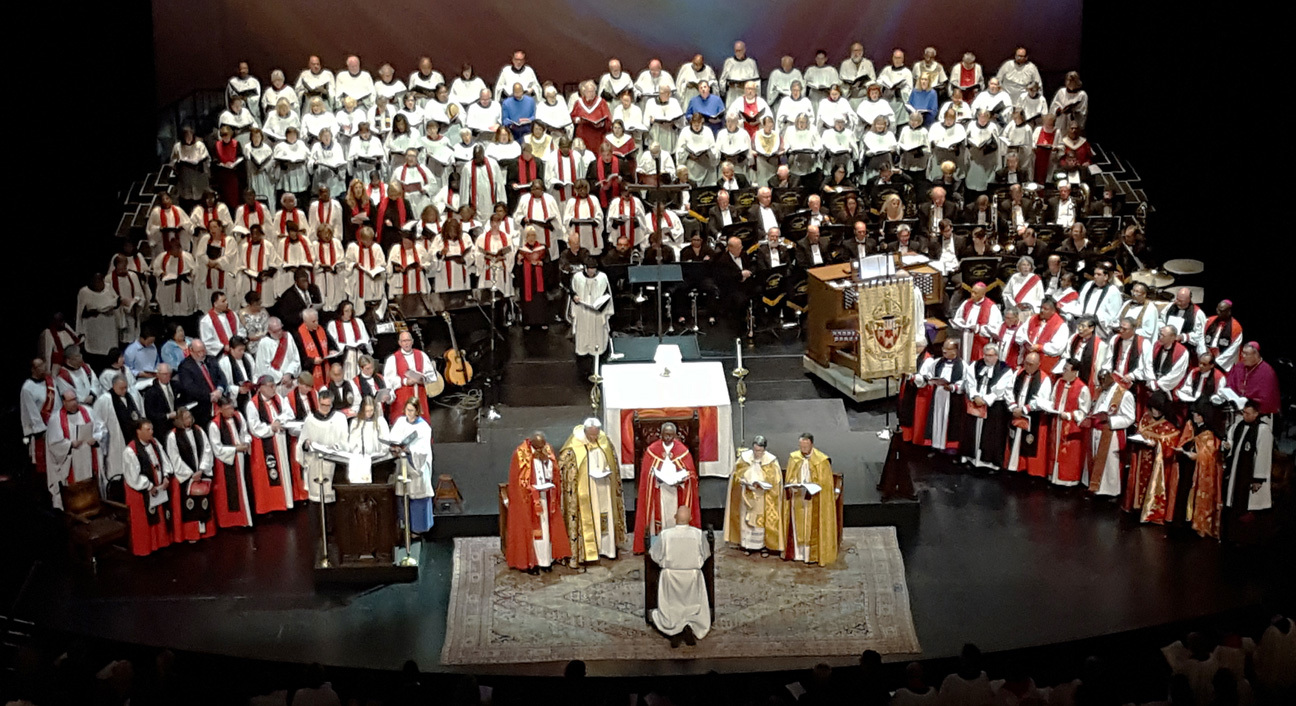 “We have been fed today to go forth into the world to do the work that Jesus Christ has prepared for us, to feed his people, to work for justice, to work for unity, to work for peace. It was a grand fiesta in the Diocese of Los Angeles.”

Brenneman founded the Pasadena Mennonite Church, where he served for 20 years. In May 2017, he was named president of the American Baptist Seminary of the Southwest. He had also served as a faculty member of the Episcopal Theological School at Claremont, teaching Old Testament scholarship.

He drew laughter from the congregation when speaking about the hybrid nature of his ministry, noting that students at the Claremont seminary had gifted him with a T-shirt that said “Episcomenalian” and that he considered himself “either a high church Mennonite or a low-church Episcopalian.”

Continuing Taylor’s stated theme for his episcopacy, he said he was deeply troubled at reading that “we the people through our elected representatives and our president are proposing to cut $193 billion from food stamp programs in the next ten years … (when) 13 percent of American households are food insecure.”

The entire service may be viewed on the diocesan Facebook page here. Arrangements for the service were handled by a 14-member committee led by the Rev. Canon Melissa McCarthy, vicar of Church of the Epiphany, Oak Park, and dean of the diocese’s northernmost geographic deanery. Robert Williams, canon for community relations, provided staff support to the committee.

Sean O’Neal, music director at Holy Trinity Church, Covina, coordinated music for the service, recruiting and training an 80-voice choir of singers from congregations throughout the diocese, who rehearsed for four Saturdays before the service. Canon Philip Smith, music director at Church of Our Saviour, San Gabriel, accompanied the choir as it sang anthems by John Rutter, Canon Craig Phillips (music director at All Saints Church, Beverly Hills), Jane Marshall and Maurice Duruflé. O’Neal played the organ for congregational singing.

The Episcopal Chorale, a renowned gospel group based in Los Angeles, also performed under the direction of Canon Chas Cheatham. 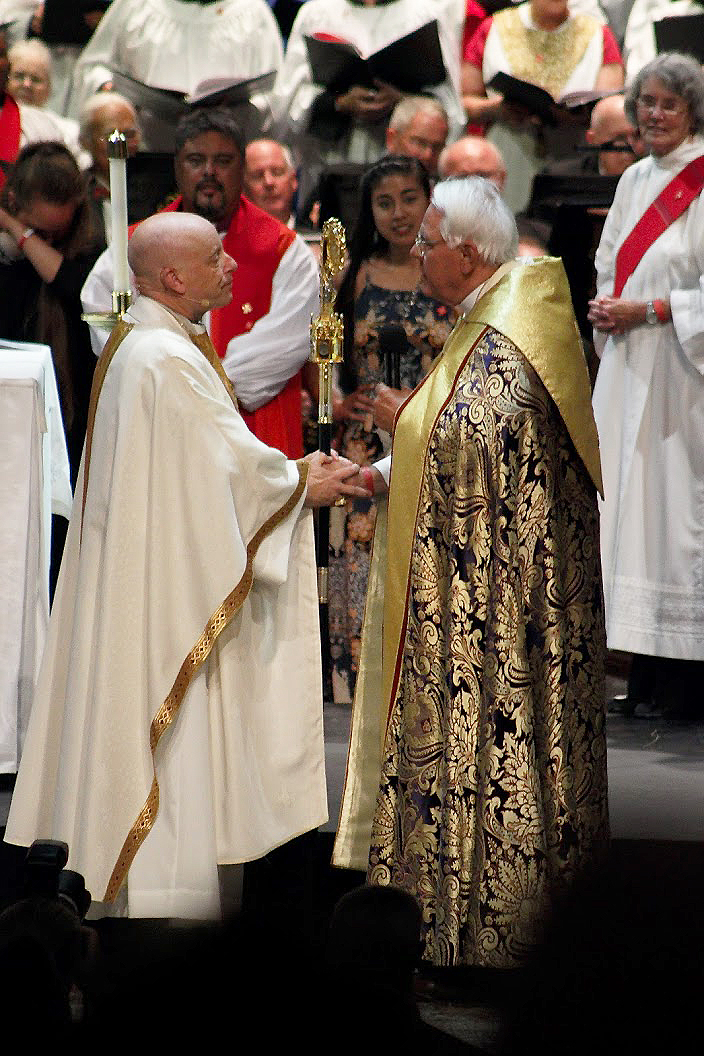 Taylor was elected to become seventh bishop of Los Angeles by the 121st annual meeting of the diocese on Dec. 3, 2016. He is the 1,101st bishop of the Episcopal Church.

He is a native Detroiter, the son of journalists, and a published novelist. Prior to his election, Taylor, who formerly served as an aide to former President Richard Nixon and later as first director of the Nixon Presidential Library, was vicar of St. John Chrysostom in Rancho Santa Margarita, in the Los Angeles diocese. He and Kathleen Hannigan O’Connor, another former Nixon aide, married in 2002. He has two daughters, Valerie and Lindsay, and two stepchildren, Daniel and Meaghan.

Taylor will succeed the Rt. Rev. Jon Bruno, who has served as diocesan bishop for more than 15 years. The Episcopal Diocese of Los Angeles was established in 1896 and encompasses 65,000 members worshipping in 140 congregations located in Los Angeles, Orange, Riverside, San Bernardino, Santa Barbara and Ventura counties.

The pavilion, which seats more than 3,000, was named for Dorothy Buffum Chandler, a leading cultural icon who was married to Norman Chandler, publisher of the Los Angeles Times until 1960.

Immediately after the service, guests enjoyed a festive complimentary dessert reception in Grand Park, across the street from the pavilion. The celebration featured a Scottish pipe-and-drum corps, a mariachi group, a Korean dance troupe, and Chinese drummers and lion dancers, all of which also led processions during the service.

At right: Bishop J. Jon Bruno hands Bishop Taylor a crozier borne by each successive bishop diocesan, a symbolic gesture recognizing that Taylor will succeed Bruno in that role when the latter retires. Photo: Elizabeth Kurtz

This article was originally posted on July 10, and has been updated with additional details.