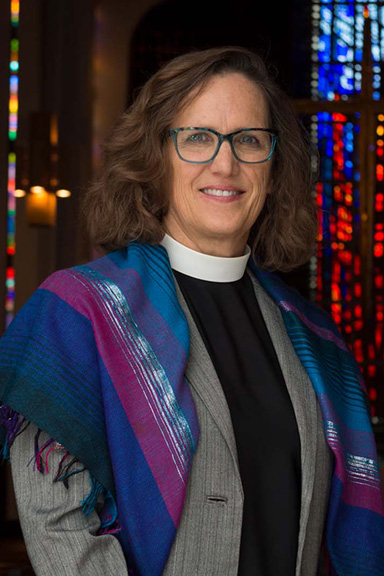 Her diaconal ministry at St. Augustine’s, Santa Monica, and her vocation as a senior public health researcher for the RAND Corp. are intertwined, say Derose and colleagues, and she views herself as a bridge between the two worlds.

“It’s really about social justice. That’s what propelled me into research addressing health disparities, and into a religious service founded on justice,” she told The Episcopal News recently.

Interestingly, “about the time I started working at RAND, I began discernment for the diaconate,” she added.
It was 1993, a year after the L.A. riots. After spending several years in Ecuador, she was feeling a deeper call to engage public health challenges in south Los Angeles. She was attending Holy Faith Church in Inglewood and assisting with Spanish language music and services there, recalls her friend the Rev. Canon Jaime Edwards-Acton.

He had just completed the pilot Episcopal Urban Intern year at Holy Faith and was himself in discernment for priestly ordination.

“We had just started a Spanish service at Holy Faith, and Katie and I helped do the music for the service,” recalled Edwards-Acton, who is now rector of St. Stephen’s Church, Hollywood. “We did a lot of church building. Then I went to seminary and she went and got her doctorate in public health at UCLA. She’s been on the board of the Jubilee Consortium for several years.” The Jubilee Consortium, based at St. Stephen’s, is a network of nonprofit service and outreach organizations promoting health and well-being through building community and leadership development, also areas of focus for Derose.

Derose was ordained in 1998 and served at Holy Faith for about nine years prior to moving to Santa Monica, where RAND is located.

Derose’s diaconal vocation informs, deepens and broadens the scope and impact of her research, according to RAND colleague Malcolm Williams, who has collaborated with her on several studies.

“She recognized that community-based institutions like churches have resources of social connectedness, connections to families across the life course,” he said. “She was looking at ways to address health disparities in communities that attend church.” Her pastoral sensitivities lend themselves to reaching out to those populations, he said.

“It was just a total, all-in effort,” she said in a RAND Corp. profile about Derose’s dual roles. “We moved the needle.”

At Derose’s invitation, Seeds of Hope, the diocesan food justice ministry, also collaborated on “Eat, Pray, Move.” Seeds of Hope staff assisted the participating churches with creating vegetable and fruit gardens and offered garden-based cooking and nutrition classes. They did environmental assessments and recommended ways to improve access to healthier foods and options and to schedule church-based physical activity, Zumba and yoga classes.

Tim Alderson, executive director of Seeds of Hope, said the project yielded a number of positive and heartbreaking results.

“They studied the impact, looking at before and after the five weeks and what sort of changes were made in people’s lifestyles and eating habits,” Alderson said.

Participants gained less weight than a control group of church members who did not participate in gardening, cooking, nutrition classes and physical activity. In some cases, related health issues, like diabetes and high blood pressure, were identified, and lifestyles changed.

The study also helped quantify the positive impact of the work of Seeds of Hope, Alderson said, but it also revealed the “shocking and heartbreaking news that 74 percent of our clients regularly have to choose between buying food and paying rent. It shows the stark connection between food and housing insecurity. These are people on the edge of becoming homeless. The way they avoid that is by going hungry.”

A passion for public health

Addressing such needs is what Derose aimed for, initially considering medicine as a career but deciding instead on public health.

She was raised in Iowa City, and a high school mission trip to Mexico planted seeds that led her to Costa Rica during her undergraduate junior year at Duke University, and later, as a Fulbright Scholar, for a five-year stint in Ecuador. She earned a Ph.D. in health services research and a master of public health in population and family health from UCLA.

“What I wanted my life to be about … is addressing health inequalities and justice issues,” she said. “My real passion is around understanding disparities and inequalities from an analytic research perspective and how to affect them with programs or policies.”

She discovered the Episcopal Church while in Quito, a relationship she continued at Holy Faith upon her return to the U.S.

The mother of two teenage sons, Derose received the Presidential Early Career Award for Scientists and Engineers, the highest honor bestowed by the U.S. government on scientists and engineers beginning their independent career. She has published numerous articles and her impact “goes beyond her work and into actual lives and even the careers of those she works with. I can’t quantify it, but you can’t imagine the reach Katie as an individual has had,” said Williams, her RAND colleague.

Working with parishes and parks

The Rev. Michael Mata, a community activist and director of Azusa Pacific Seminary’s program in Transformational Urban Leadership, is working on a four-year study with Derose that aims to link parishes and parks.

“This is our third project together,” he said. “It’s to see how parks can be utilized in lieu of gyms and membership fees; how they can be utilized to create a healthier environment for everybody.”

Mata chairs the Boyle Heights community advisory board (CAB) in East Los Angeles, and resonates with Derose’s use of CABs to ensure community representation, input and feedback.

“[Derose] is very committed to participatory research, where you actually engage those individuals who are going to be part of the research, so that they have input into the design and even into understanding the results.”

Derose’s research has encompassed a range of food-, HIV- and social justice-related issues in both the U.S. and Latin America. Often her worlds converge: while working on HIV-related issues, she was invited to serve on the board of an HIV community provider in the Venice-Santa Monica area. “I invited them to the church, to find out what more they might need,” she recalled. “Out of that grew a ministry where St. Augustine’s cooks hot meals for homeless youth in Venice.”
Initially, she began working for RAND as a project director for a church-based study to increase mammography screening among African American, Latina and Anglo low-income women and has received numerous awards, not only as a “superstar” researcher but also for mentoring junior researchers, according to Williams of RAND.

“Katie is a fantastic researcher,” said her colleague Williams. “She provides a skill set others don’t have in terms of empathy and thoughtfulness in working with people, talking to people, hearing their stories. She also provides mentorship to other researchers, to bring them onto projects, to aid their career goals.”

“Because of her ecclesial understanding and social activism Katie has taken the heart of the diaconal idea of taking the church to the world and bringing the needs of the world back to the church and shown how you can live that out on a level … of influencing policy in the larger world.”

Additionally, she has represented “a more nuanced view of the church in general and the Episcopal Church in particular,” Leslie said.

“The way Katie lives her life both as a deacon and as a researcher and as a very kind, compassionate, careful person in the world, has really helped a lot of people at RAND and elsewhere who didn’t know anything about the Episcopal Church now think a lot more highly of it because they know Katie and think highly of her. She might never claim this title but, in her own way, she’s been an evangelist.”

Derose hopes the “Parishes and Parks” project will “bring together churches and parks so they have a greater synergy around promoting healthy behaviors.”

It will include training peer leaders to start walking groups and involve students from the Cal State Los Angeles School of Kinesiology to lead fitness classes. Local park advisory boards will also collaborate.

“We’re working with Latino Catholic churches on this,” Derose said. With an estimated 5 million Catholics in the Los Angeles area, 75 percent of whom are Latino, the church “has a great infrastructure for reaching large segments of this population.

Pastors will also be asked to preach, “not so much about health education but to motivate people and talk about why the church should be involved in doing this kind of work,” Derose said.

“We are trying to influence the environment. Really, we are hoping that, through bringing together churches and parks, we can have a greater synergy around promoting healthy behaviors and creating stronger community connections.”