Prism executive director Gibbs, founder of the Community of Divine Love, had borrowed the job description from another monastic, but added: “We listen and respond to the needs of the world with love. This is the work we are involved in, the work of helping people sort out the suffering human condition, the work of valuing human life, of striving for justice and peace and bringing respect and dignity to each and every human being.” 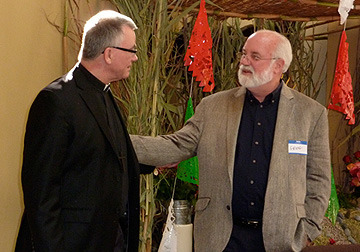 Guest speaker Greg Boyle, a Jesuit priest and founder of Homeboys Industries, described restorative justice ministry as being “enlightened witnesses, people who through kindness and tenderness and focused attentive love return people to themselves.

“You hold a mirror up and say, ‘here’s the truth of who you are. You are exactly what God had in mind when God made you.’ Then you watch in this privileged place where people become that truth, where they inhabit that truth. There is nothing more powerful in the world than redefining, reimaging yourself like that,” said Boyle.

“But often enough you have to reach in and dismantle messages of shame and disgrace that get in the way so people can see that truth.”

Boyle shared stories of “homies” he’s encountered at Homeboy Industries, a gang intervention program he created in Boyle Heights, considered one of the city’s toughest neighborhoods. He also signed copies of his book, Tattoos on the Heart: the Power of Boundless Compassion, which shares his experiences as pastor of the Dolores Mission parish. All proceeds from the book, which received the 2010 Southern California Independent Booksellers Association Award for nonfiction, go to Homeboy Industries.

On Dec. 8 Gov. Jerry Brown inducted Boyle into the California Hall of Fame in recognition of his service as a community activist helping former gang members and at-risk youth in Los Angeles.

Homeboy Industries grew out of a 1988 jobs program Boyle created, which sought an alternative to gang violence. Within 20 years, he said, he’d buried more than 170 young people killed by gang violence. Initially, he acquired a small bakery across the street from the parish after recognizing the overwhelming barriers to employment for those seeking to leave gang life. The ministry has grown to include numerous businesses, free programs and services, assisting more than 12,000 people yearly with counseling, education, tattoo removal, job training and placement. 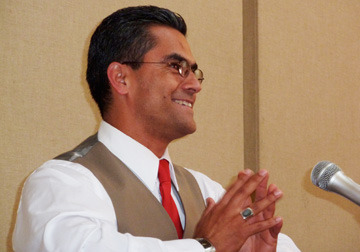 Franky Carrillo, imprisoned for 20 years for a crime he did not commit and freed last spring after being exonerated, addresses the Prism luncheon. Photo/Pat McCaughan

“Being able to love, that concept was so foreign to me,” he told the Dec. 13 gathering. “But I’d see Fr. Boyle walking in the projects. People would greet him and they’d say ‘Fr. G, come over for food.’

“He would have just finished eating and was walking off the meal but he knew that was their way of showing him love. He would never say he was full. He never rejected a bite, a taco, a meal. I took that to heart,” he said.

When Carrillo was imprisoned at 16 for a crime he didn’t commit, he recalled that story, he said. He spent 20 years at Folsom Prison and was exonerated March 14 of this year by the Northern California Innocence Project.

“In a nutshell what it was about for me was that, through each other, God shows up and we can’t ever say ‘no, thank you.’ You have to know how to accept it, how to be loved,” said Carrillo. 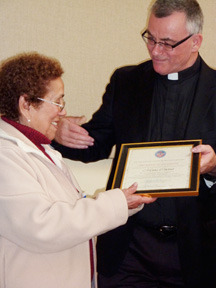 On behalf of Prism, Gibbs honored volunteer Maria Cuevas, retiring after 15 years as a King Hospital volunteer and also named Charles Carr as 2010 volunteer of the year.

“It’s a beautiful service, also very painful, some patients stay with you, on your mind,” Cuevas said through an interpreter of her chaplaincy.

Carr, a six-year volunteer, helps lead worship services and teaches bible study and spiritual formation classes in the jails. The ministry was a gift that came along at just the right time in his life, when a job in which he’d invested a lot of ego and energy had been taken away from him, he said.

“To have the opportunity to be with other people that, in their own way, had had the rug pulled out from under them …and to hear their stories and share mine, was exactly the medicine I needed, was exactly the grace I had been given,” he told the gathering.

“Six years later, if anything, that feeling continues to get stronger,” he added. It’s a blessing to be able to share the message that, no matter how much life has beaten them up that “that is not who they are in truth and there is a future of possibilities,” he said. 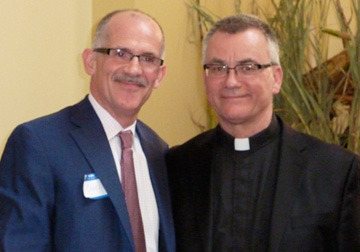 Charles Carr is honored as Prism Volunteer of the Year. Photo/Pat McCaughan

Gibbs also noted the work of Sister Greta Ronningen, who created and is implementing the Good Seed Project, a three-year spiritual formation program for young women at Los Padrinos Juvenile Hall, where she serves as chaplain along with Sister Teresa Doherty of the Catholic Archdiocese of Los Angeles Restorative Justice Ministry, and who was also honored by Prism.

Gibbs thanked Javier Stauring, director of the office of restorative justice for the Archdiocese of Los Angeles, for helping to establish Prism in the county jails six years ago.

“When Jesus said I was in prison and you visited me, he meant it in a literal way,” Stauring told the gathering when accepting the honor. “Like, we go into prison and have this great opportunity. He didn’t say bring Jesus in to those who are in prison. He said, ‘I’m here, come visit me.'” 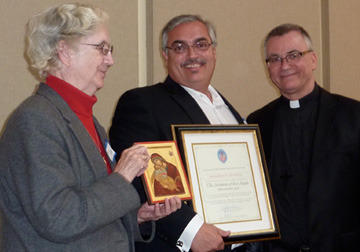 Doherty has served as juvenile hall chaplain for 36 years. She told the gathering that Los Padrinos opened in 1957 but didn’t have a chaplain “until I came in 1975. It took a long time to finally get recognized. We didn’t have a prison ministry as such. But we’ve come a long way.”

Gibbs said restorative justice ministry is important work “and there’s more to do. Jesus reminds us that the poor will always be among us, needing our gifts and offering us theirs.”

In 2012 Prism will introduce a renewed focus on Victims of Crime Week April 22 – 28, including coordinating Taizé services throughout the diocese and bringing a more focused attention to juvenile justice week, he said.

The group viewed a brief “Just Action video” produced by the diocesan community relations office in which Bishop Jon Bruno acknowledged the great need for ministries like Prism, adding: “We need to be so supportive of victims while at the same time not discarding people in prison. We give thanks for prison ministry and hope you’ll support it.”

Fr. Boyle shared various vignettes and even invoked a beloved Christmas carol, “O Holy Night,” as a partial job description for what the ministry requires.

He shared stories interwoven with humor and sadness, including one about Filiberto, a “homie in a wheelchair” who found a photo of himself at age 10 and wanted Boyle to have it enlarged. Describing laborious efforts to comply, Boyle said the end result was “a bit green and grainy but this isn’t a story about the photograph. It’s a story about the self made to feel too small from having been bombarded with messages of shame and disgrace.”

A hallmark of the early Christian community was being overcome by awe in the stories of the Acts of the Apostles. “It’s about the kind of compassion that can stand in awe of what the poor have to carry rather than judgment at how they carry it,” he said. “Imagine what our communities would be like if filled with awe and less judgment.”

And then there was José, who’d been a homeless, heroin-addicted, tattooed gang member and who had served as a substance abuse counselor for Homeboys before moving on to help with re-entry. José had accompanied Boyle to Virginia to do a presentation to 600 social workers.

José told his story to the group, Boyle recalled. “He said, ‘I guess you can say my mom and I didn’t get along so well. When I was really, really little, she said, why don’t you just kill yourself, you’re such a burden to me. The whole audience of 600 gasps and he says, ‘It sounds way worser in Spanish.’ And everybody laughed,” Boyle said.

When José was nine, his mother left him at an orphanage in Baja California and it took his grandmother 90 days to find him. He endured daily beatings with “things you can imagine and things you can’t imagine,” Boyle said. “‘My back was a bloody mess every single day,’ José told the gathering. He wore three T-shirts to hide the blood.”

“‘Kids at school would make fun of me and say, hey fool it’s 100 degrees outside, why are you wearing three T-shirts? He said, ‘I wore three T-shirts into my adult life because I didn’t want anybody to see my wounds. But now, I welcome my wounds. I embrace my wounds. I observe my wounds. I run my finger over my wounds because I know it can’t help anybody at Homeboy Industries unless my wounds are my friends.’ And awe came upon everyone,” Boyle said.

He shared about another speaking engagement where after sharing his story a former gang member, Mario, received a standing ovation from an audience of a thousand in Spokane. “And Mario stood there and put his face in his hand, overwhelmed that a room full of total, perfect strangers had returned him to himself,” Boyle told the Cathedral Center gathering.

“I think that is the only worship God has any interest in. So you do it, and the world accuses you of wasting your time.”