Bishop J. Jon Bruno announced to Dio​cesan Convention that he has named the Rev. Lorenzo Lebrija — an experienced fundraising professional who will be ordained to the priesthood in January — to a dual role serving the diocese as bishop’s officer for development and as parish associate of the Congregation of St. Athanasius at the Cathedral Center in Echo Park. 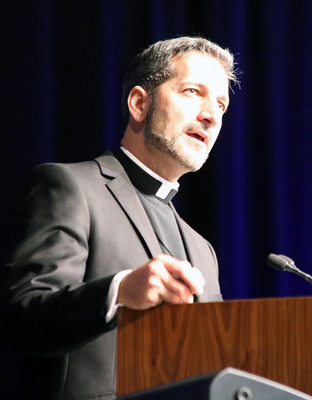 “Lorenzo has begun his work proactively with great energy, and I am very glad to welcome him to his important ministries,” Bruno said of Lebrija, who addressed Diocesan Convention to introduce the new Horizons & Heritage Fund established by the Corporation of the Diocese to raise at least $600,000 to aid diocesan mission congregations, campus ministries, and creative initiatives (see related story here).

“When you have big dreams you attract other big dreamers,” Lebrija told the News. “Our table conversations at convention showed that in this diocese we have some big dreams. That’s very exciting.”

A 2014 graduate of the General Theological Seminary in New York, Lebrija was in 2007-2009 program director of the John S. and James L. Knight Foundation, coordinating some $12 million in annual giving. Thereafter he oversaw fundraising as chief executive of a Miami-based professional chamber choir and orchestra known as Seraphic Fire. With fund development experience spanning more than 20 years, Lebrija said he is eager to apply his expertise to the goals identified by the bishop and corporation.

“Fundraising is a unique ministry,” he noted. “It’s offering other people the opportunity to participate with us in our vision and mission. Henri Nouwen said that fundraising is always a call to conversion—to experience a deep shift in how we see and think and act. This is why to me, this is a sacred ministry which I take very seriously and always center it on God.”

Lebrija brings similar vision to his role as parish associate.

“It’s a wonderful opportunity when you can walk with people on their journeys. The community at St. Athanasius has welcomed me with so much love,” he said, adding his appreciation for the opportunity to work with the Rev. Canon Frank Alton, priest-in-charge of the congregation. “He approaches his job from a place of genuine love and it shows. From Frank, I can learn to be a great priest.”