Singing “we shall overcome,” the Rev. Canon George Regas and more than a dozen other anti-war protestors were arrested Oct. 7 in front of the Federal Building in downtown Los Angeles after rallying against the war in Afghanistan. 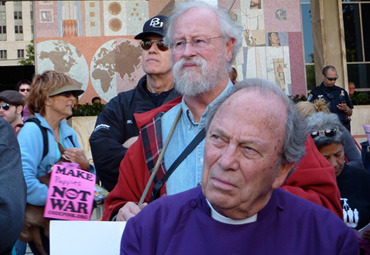 The Rev. Canon George Regas (front), the Rev. John Forney (center), retired priest of the diocese, and actor-activist Mike Farrell listen to speakers at an rally on Oct. 7 protesting the war in Afghanistan as the conflict reaches its 10th year. Photo/Keith Yamamoto

The rally — to draw attention to the tenth anniversary of the war — drew a multi-ethnic interfaith crowd of several hundred. Included among the protestors were Hollywood actors Mike Farrell (MASH) and Mimi Kennedy (Dharma & Greg), along with supporters from the Occupy Los Angeles tent city a few blocks away and a surprise visit from Princeton University Professor Cornel West and radio and television personality Tavis Smiley.

The Rev. Tom Carey, a Franciscan monk at the Episcopal Church of the Epiphany in Los Angeles was also arrested at the rally, organized by Interfaith Communities United for Justice and Peace. ICUJP was founded by Regas after the Sept. 11 attacks.

For Regas, who turned 81 this week, the Oct. 7 arrest, was a symbolic gesture, to call attention to the “obscenity” of the war and what he called the staggering need to “make jobs, not war.” That chant was often repeated as protestors marched a half-mile from La Placita Church to the Federal Building. 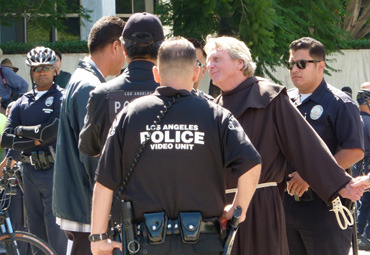 The Rev. Tom Carey, a monk of the Episcopal Franciscan order and priest-in-charge of Church of the Epiphany, Los Angeles, was one of those arrested at the anti-war rally on Oct. 7 at the Federal Building in downtown Los Angeles. Photo/Keith Yamamoto

West told the cheering crowd he was in Los Angeles to visit with Occupy Los Angeles, a grass roots organization springing up across the country, from Wall Street in Manhattan to Philadelphia and elsewhere, protesting the plight of the poor and corporate greed.

“Something’s happening; Los Angeles is standing up for justice,” West said amid cheers and applause. Invoking the spirits of Martin Luther King Jr., Rabbi Abraham Heschel, Cesar Chavez, Dorothy Day and Philip Berrigan, West said protesting the war and corporate greed is “not anti-America. This is anti-injustice in America. 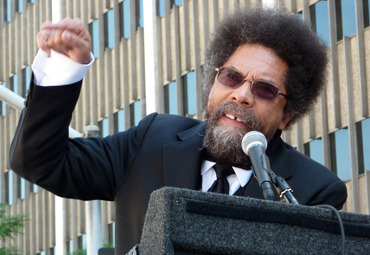 Farrell, who starred in the television series MASH, told the protestors: “We cannot allow this country to be taken over by forces that want it to be their way and not our way. We cannot allow a $700 billion defense budget to make beggars of people on the streets, to make jobless Americans, to make people hungry in our country while they make profits out of war. This cannot be allowed to become the American way. I want my country back.”

Also addressing the crowd were Shakeel Syed, executive director of the Islamic Shura Council of Southern California and Maria Elena Durazo, executive secretary-treasurer of the Los Angeles Federation of Labor, AFL-CIO, as well as Rabbi Leonard Beerman, who was founding rabbi of Leo Baeck Temple in Los Angeles, where he served for 37 years.

Beerman told the gathering that he opposed the war because “we are called to a different vision of the world, in which the essential dignity of every human being is honored.

Durazo recalled a visit to Madison, Wisconsin, earlier in the year to support striking workers when a local restaurant, Ian’s Pizzeria, fed everyone for free. After visiting the restaurant she discovered the pizzeria was able to feed the striking workers through donations being sent from all over the world, including Egypt.

“While that country was in the midst of its own peaceful revolution to throw off a dictatorship Egyptians were sending donations to Ian’s Pizza in Madison, Wisconsin,” she said. “It brought tears to my eyes when I saw that American soldiers in Afghanistan also sent donations. They understood what we were fighting for in Wisconsin.

“They heard the chant of ours, ‘this is what democracy looks like’ and now, with Occupy Wall Street, Occupy Los Angeles and Occupy Phoenix and hundreds of cities throughout the country, we’re going to keep that chant alive across this nation,” she said.

“Stop funding the wars, start funding jobs, bring home the men and women from Afghanistan to a safe country and an economy that works for the 99 percent!”

Syed said he stood with other Americans, “a bruised American in a broken America whose ideals I cherish but whose policies I despise.”

He called for an end to preemptive wars and assassinations and said he mourned all the victims of America. “On this day I renew my pledge to oppose any leader of any color for invading countries and killing innocent people and calling them collateral damage,” he said.

Adding that a new America is being born, he said: “I ask my fellow brothers and sisters in America to not mourn the death of the old America, but to nurture the new America, a new America that does not shy away in questioning the wisdom of wars. A new America that refuses to submit to the policies of death and destruction, that insists for life and health and education and work and that embraces all of humanity as people of God and not just some.”

Regas, rector emeritus of All Saints, Pasadena, and other clergy and faith leaders in vestments led the group, praying, chanting and singing, from La Placita past Los Angeles City Hall. He and others called for an end to the war and for the government to create jobs and to assist the poor.

Noting that the Afghanistan war is the longest running conflict in U.S. history, accounting for the deaths of more than 1,700 soldiers, Regas said: “War versus jobs is a concept that really resonates with the American public.

“We just want to hold up the concept that America must choose between a life of for all of its people, jobs for people, health care for people, taking care of the poor and the children as a priority — that has a greater claim on us than the perpetuation of America as using war as the primary instrument of a national policy.

“America is waking up to the fact that the enormous war machine trying to have dominance across the globe is a very costly reality as the country struggles to take care of the children and the poor and the unemployed. We want to do everything we can to nurture that growing dream of a country that puts the life of its people and the health and wellbeing and education of all its people above the use of instrument of war to accomplish whatever it is that we’re trying to accomplish with our militarism.”