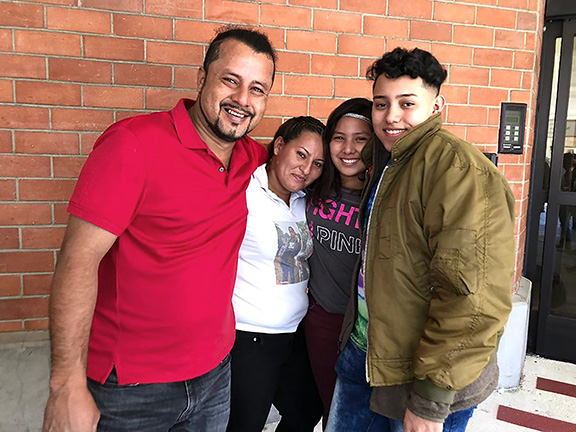 The Flores family of Honduras — father Arnol, mother Idilia, daughter Yuliana and son Jesús — celebrate as they are reunited in the United States after a year’s separation. Photo / Greg Kimura

Arnol and Idilia Flores and their two children endured years of difficulty, danger and violence in their native Honduras, followed by hardship, separation and anxiety when they came to the United States to apply for asylum. But lately a series of miracles has changed their lives and brought them new hope.

The first miracle got them from Mexico to Ojai, where St. Andrew’s Episcopal Church volunteered to host them. They were among 29 families who had been granted asylum and had host sponsors, yet initially were refused entry into the U.S.

The second was quicker-than-expected reunification with their 16-year-old son Jesús, who had been sent to foster care in New York at their first attempt to seek asylum more than a year ago.

The third miracle is a month’s housing provided by the Rev. Lee Walker, a priest of the diocese, in Los Angeles, where the family needs to be so that Jesús can have surgery to repair damage from an ear infection that started during his New York sojourn.

The Rev. Alexia Salvatierrra, an Evangelical Lutheran Church in America (ELCA) pastor and long-time immigration activist, said the family also needs “a support circle, people who are willing to provide transportation, donations, groceries, take them to appointments, basic needs, things like that.”

Leaders of Sacred Resistance, the sanctuary task force of the diocese, has stepped up to help the family. A few weeks after they took up residence with Walker, Jesus and his sister Yuliana, 14, “are enrolled and attending school,” said the Rev. Greg Kimura, rector of St. Andrew’s, Ojai, who has helped shepherd the Floreses since their arrival in the U.S. “The family is going to various appointments related to asylum, getting passports, health coverage, etc. The next big thing is to get Jesús treatment. The family is also seeking longer term housing in L.A,” as Walker is expecting other occupants soon in his home.

Anyone interested in helping the family with housing or other needs can reach Salvatierra at: alexia@alexiasalvatierra.com.

The miracle from Mexico to Ojai

Arnol, Idilia and Yuliana Flores had been stranded in Mexico. Along with 28 other families facing similar circumstances, they spent the day hungry, thirsty, dejected, in 80-degree heat waiting and praying in Mexicali.

The Flores family’s experience was typical of their fellow migrants. They had fled Honduras after authorities burned their home and all their possessions, according to Arnol Flores.

“They beat me,” he said through an interpreter, as his wife Idilia wept at the memories. “They fractured my skull.”

Al Otro Lado (“On the Other Side”), an interfaith immigrants’ rights activist organization, had arranged for sponsors for all of the families and helped them get all their asylum paperwork in order. When their progress stalled at the border, they asked a group of Los Angeles- and San Diego-based faith leaders, including Los Angeles Bishop John Harvey Taylor, to demonstrate, pray and advocate for the refugees on the U.S. side of the border in Calexico, just a few yards’ distant, but a world away.

On the U.S. side, against a backdrop of clanging metal gates, people crossed into Mexico unencumbered, while throughout the day the activists, representing a variety of Christian denominations and faith organizations, sang, prayed and chanted, holding aloft signs reading “Keep Families Together.”

Curious passersby stopped to watch, often voicing their support for the efforts, while border patrol agents ordered the vigil participants to move away from the entrance of the U.S. Border Inspection Station.

After a delegation from the demonstrators — Taylor among them — met with border station officials, requesting the families be allowed admittance into the U.S., they were able to speak by phone with an upper management-level official, who promised to do what she could to expedite the matter. Later, Taylor crossed into Mexico to meet with the Floreses and other families.

Kimura had been waiting in Mexicali with the families — and specifically with the Flores family — since early morning. “I’m here to drive them to their new home,” he said, because Virginia Ericsson, a St. Andrew’s parishioner, had agreed to host them.

The day was long and grueling and gradually the activists, drawn by their other responsibilities, left; the families were still in Mexico.
But word came late that evening that the families had been admitted into the U.S. — but not to meet their hosts. Instead, they were placed in detention.

“There was a flash of hope at sundown on Saturday [March 2], thanks to the careful planning of Al Otro Lado and its partners, the patience and courage of the families who came back to the border, and the officials who found a way to give them a hearing,” Taylor told The Episcopal News in a text message later that day.

He added, “It was a privilege and a blessing to bear witness. Let’s continue to pray and work until all the asylum seekers have been heard and all the families reunited.

A few days later, the Flores family was released from detention and able to join Ericsson, their host in Ojai.

“It was wonderful having them here,” Kimura said. “The family was just settling in and we expected it to be a while before they were reunited with their son, because of the legal issues of guardianship.”

But, with the aid of Al Otro Lado, the reunion happened much more quickly — yet another miracle, according to Kimura.
“But just as quickly, the issue with the ear surgery came up,” he said.

Salvatierra said the families have already been through more than enough trauma.

“The courts in the U.S. have already ruled that these families belong together,” she said in an earlier email to vigil participants.
“The government reunited multiple families but these parents have been deported without the opportunity to apply for asylum and were more difficult to locate.”

She added: “While they have humanitarian visas in Mexico so that they can legally come to the border, Mexico is a dangerous place for them; organized crime in Mexico works collaboratively with the organized crime syndicates who threatened their lives in Central America,” she said.

“We have seen Central American families extorted, attacked, and trafficked. These children and parents are also unnecessarily suffering the trauma of separation from each other—a trauma that needs to end as soon as possible.”

St. Andrew’s had already rallied around the Floreses, Kimura said, getting them settled in to what was supposed to be their new life. The Floreses liked Ojai, Arnol said, and hope to be able to return there at some point. A skilled carpenter, Arnol is looking forward to working legally to support his family, free of the fear of criminal gangs.

“Thanks to this blessed collaboration between Sacred Resistance, the people of St. Andrew’s in Ojai, and Greg Kimura and Lee Walker, our diocese has again shown itself to be a place of sanctuary and welcome,” said Bishop Taylor on hearing of the family’s current situation. “On behalf of our whole community, I thank all those who have provided loving care in the name of Christ for the Flores family.”