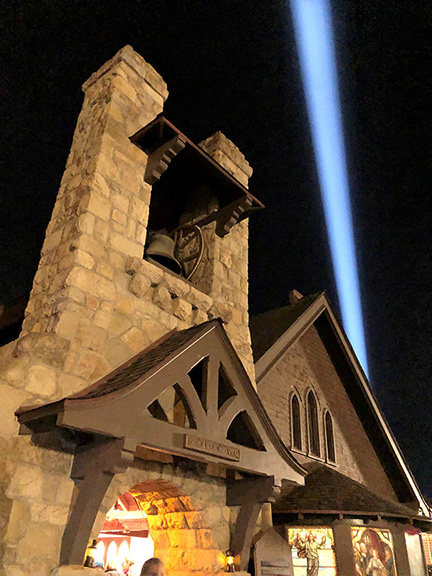 A beam of light guides community members to All Saints Church, Santa Barbara, on Jan. 9 as its Montecito neighborhood remembered the victims of deadly mudslides in 2018.

“Everybody had a flameless candle; the park was awash in candlelight,” recalled the Rev. Aimée Eyer-Delevett, All Saints’ rector. “One of the survivors of the mudslide who lost two family members and herself was recovered from the mud, sang ‘Amazing Grace.”

“A mother who lost two of her children that day read a poem written about a month prior to the mud slide by one of her children who died in the slide. The children of the community came together as this newly created one-time Montecito’s children’s choir and sang a beautiful, gentle arrangement of ‘This Little Light of Mine,’” Eyer-Delevett said.

“We had this candlelight walk all the way down to All Saints, and our candlelight walk flooded this path of death and destruction from a year ago with the light of hope and healing and life and community.”

Eyer-Delevett and other community leaders had planned the one-year event that began in the park and eventually led at least a thousand participants along San Ysidro Road to All Saints, where a bell tolled 23 times — once for every person lost on that night in the debris flow. Participants were greeted with bowls of lentil soup and musical offerings from All Saints parishioners.

“The crowd moved along San Ysidro Road, taking the path that so many people took that night to safety, but also following the direction of the mudslide itself,” Eyer-Delevett said.

The deadly slide occurred in the early morning hours of Jan. 9, 2018, killing 21, with two others still missing. At least 160 people were hospitalized, some with critical injuries. The disaster destroyed at least 100 homes and damaged an additional 300. Property damages totaled about $177 million and the clean-up has cost another $43 million.

Heavy rains in areas devasted by the December 2017 Thomas Fire loosened rocks and debris in the Santa Ynez Mountains, causing a 15-foot wall of mud to flow at estimated speeds of up to 20 miles per hour into Montecito. The fire had burned approximately 280,000 acres in parts of Santa Barbara and Ventura counties.

Media reports documented the mudflow’s extensive damage: more than 20,000 people were without power; a 30-mile stretch of U.S. 101 from Santa Barbara to Ventura was closed. Low-lying areas were not included in initial mandatory evacuation orders. More than a thousand firefighters from California and other states aided in search and rescue operations and cleanup efforts. 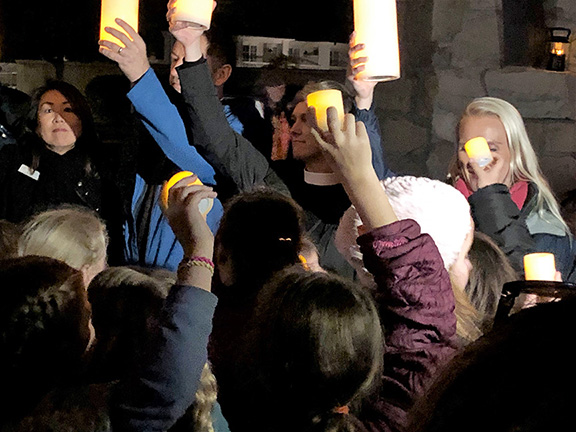 Rector Aimée Eyer-Delevett, center, and members of All Saints’ Church join their neighbors to raise candles in honor of those who died in the January 2018 mudslides that devastated the community.

Recovery and a community’s resilience

For Montecito residents still in the process of recovery, marking the one-year anniversary of the mud flow was huge, according to Marvel Hitson, director of congregational health and a trauma chaplain with the Institute for Collective Trauma and Growth in Montecito.

“It was meaningful for the community in terms of coming together and honoring the collective experience,” she said. “It was a time where the community felt connected again and we were able to remember what it is to be together, to have hope based on resilience as a community.”

In the immediate aftermath of the disaster, Hitson was deployed to offer crisis counseling, and to assist those affected with financial, emotional, spiritual and physical resources, and to help connect them with long-term support.
And while resilient, the community still struggles with the strain of the aftermath.

“When it rains, there is stress and anxiety triggered and flashbacks,” Hitson said. “People have a sense that we’re not entirely secure. We feel vulnerable, and that’s not a comfortable feeling.”
Others, who were able to salvage their homes, are learning that repairs take longer than they had hoped, she added. “Permitting takes a long time. Insurance takes a long time.”

The nearby mountainside, so scarred by the fires, remains vulnerable to debris flows and it will take a few years for the hills to be established with enough vegetation to prevent them, she added.

“The county has cleared debris basins and done what they could to get alerts out but, it doesn’t change the threat of not knowing how much rain is too much to produce more debris flows,” Hitson said.

While the one-year community commemoration was hopeful, she said, “it’s still living with the reality that recovery is not over in a year and more active disasters are taking three to five years or longer and that’s on many levels — physical rebuilding, emotional and spiritual rebuilding, and getting to a place where we’re living more wisely than before and being able to hold what has happened.”

Equally present “has been the spirit of God,” Hitson added. Through pastors, interfaith leaders and others who have demonstrated a tangible presence of love and grace and hope, the community has grown together and worked together to help build resilience, caring for one another and responding to the needs of others.

“We have really a great spirit in this community and that has been helpful,” Hitson said.

A disaster response committee continues to meet weekly and to take a holistic approach to recovery.

She said All Saints also offered her space to provide support groups and one-on-one counseling for residents. “I was able to partner with them and offer that to the community and that was really meaningful to me as well.”

All Saints has “been just amazing throughout this entire effort,” she added. “It was the triage center on the very first night of the event. They played a central role in helping people who had nowhere else to go that night as they were escaping their homes.

“What happened that night and what happened last week at the Raising our Light event, ended at All Saints. After the candlelight procession, they rang the bell 23 times and served us soup. There was a light that came up from behind the church.

“It was very symbolic of what All Saints has become for this community, a real place of hope and light and love and support … where people feel welcome, loved and safe.”

Eyer-Delevett said the anniversary event created an “amazing feeling, reconciling time and space for everyone there.

“It was really filled with sustaining hope and for days and days afterwards everyone I saw everywhere I went talked about how important that healing time was, as devastating as the year before had been. The power of the community coming together and sharing hope and love with each other was a wonderful counterbalance to the isolation and darkness of the year before.”