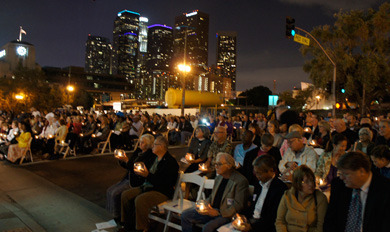 A standing-room-only interfaith crowd—young and old, male and female, gay and straight, politicians and priests, blacks, whites, Latinos, Asians — gathered at the Los Angeles city hall steps Sept. 10 to mark the tenth anniversary of the Sept. 11 attacks and to turn “the darkest day in American history” into a “OneLight” evening prayer service of unity and peace.

Los Angeles Mayor Antonio Villaraigosa welcomed hundreds of Muslims, Christians, Jews, Buddhists, and Baha’i as well as civic and religious leaders from across Southern California, representing some 500 houses of worship, asking them to begin the service by reaching out to nearby strangers and exchanging the peace with them.

Although he participated in several Sept. 11 events over the weekend Villaraigosa told the gathering that “this one is special because today we say a prayer … together for peace. We pray for tolerance. We pray for understanding. We pray for perseverance. We continue not just to memorialize the fallen but also to celebrate our values — what makes us different and yet what makes us all the same.” 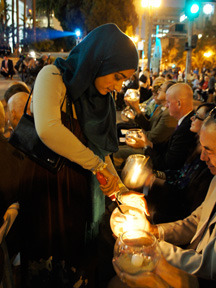 One of a group of youth interns lights candles representing prayers for the victims of the terrorist attacks on Sept. 11, 2001, and hopes for a more peaceful and unified future. Photos/Mia Blackbear (www.miablackbear.com)

Los Angeles City Council President Eric Garcetti called the gathering “historic. We light a light tonight … what is most important is for you to take these lights, whether a physical one or a spiritual one, and to be that love in the world which we all must embrace,” he said.

Garcetti thanked first responders, “some of whom are here and some who aren’t here,” such as the Los Angles police and fire departments, as well as religious leaders “who are first responders in our own lives every day.” He also thanked Bishop Jon Bruno for conceiving the idea for the OneLight celebration “and bringing it to us and the Council of Religious Leaders.”

Participants drove in from as far away as Santa Barbara, San Bernardino and Orange counties to join the observance, which an interfaith team planned in seven months, also drawing in representatives of L.A.’s five oldest continuing houses of worship. Some 110 congregations of the Episcopal Diocese of Los Angeles were represented on site. 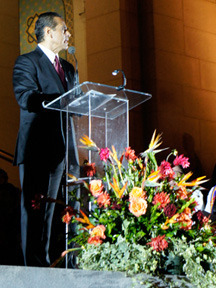 The hour-long service, hosted by the Los Angeles Council of Religious Leaders, focused on symbols of light overcoming darkness.

Applause erupted among the crowd as an interfaith procession of young people, to the beat of Taiko drums, marched up the steps of city hall and, beneath a row of American flags waving in the breeze, lit a huge torch, a central light on the steps of city hall, signifying unity among all people.

Designated “lantern-bearers” at the service were also given commemorative glass lanterns with candles bearing the symbols of the three major Abrahamic faiths. They were asked to take the globes with them to their mosques, churches, synagogues, temples and other assemblies for use in their worship the week of Sept. 11, and to honor interfaith unity.

The lanterns, held aloft by those in the crowd as well as civic and religious leaders, lit up the night as the names of the 32 Southern Californians who died in the terrorist attacks on Sept. 11 were read aloud. 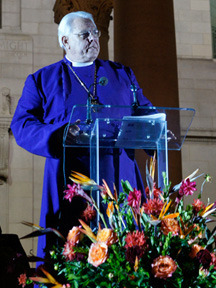 A volunteer 50-voice interfaith choir under the direction of Philip Smith, conservator of the organ at Walt Disney Concert Hall in Los Angeles and music director at the Church of Our Saviour, San Gabriel, performed a variety of musical selections, including “A Choral Quilt of Hope,” an adaptation of the preamble to the United Nations Declaration of Human Rights. A youth choir from St. Timothy’s Episcopal School, Compton, sang “Hold the Light.”

Additionally, Aviva Rosenbloom, cantor emerita, Temple Israel of Hollywood, presented the 23rd Psalm in Hebrew as Rabbi Mark Diamond, executive vice president of the Board of Rabbis of Southern California, sounded the shofar, the ram’s horn.

Imam Salim Ghazaly of Santa Ana chanted from the Koran, “God is the light of the heavens and the earth. The likeness of divine light is as of a niche with a lamp inside,” followed by Dr. Maher Hathout, chairman of the Islamic Shura Council of Southern California, who said “God does not belong to one religion. All religions belong to God.” 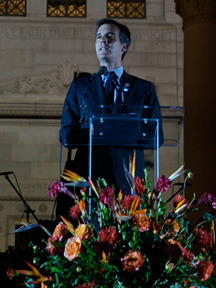 “However, September 11, 2011 will be the day of one light, one peace, one world for us all as religious and civic leaders as well as members of our respective communities. Tonight, we unite as one family of citizens of America and the entire world.

“Through our prayers we will be committing our lives for the realization of dreams and aspirations of the victims of the Sept. 11 attacks … (whose) spirits will forever remain in our hearts.”

He also thanked Bruno, a founding member of the religious leaders’ council, for “sharing his dream with us as the religious and civic leaders of the city of L.A. and guiding the citizens of this great city with his dream, of one light, one peace, one world,” he said amid applause.

Bruno told the gathering about the Hands in Healing project he created after Sept. 11, in which a multiethnic group of young people traveled around the country sharing with others “about the abundance of life and … about the power of what it is to be gracious, forgiving and compassionate. Not just tolerant, but incorporating our lives with one another, linking to each other in peace, in tranquility and in compassion. 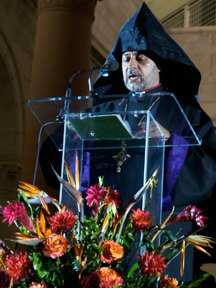 “When we stand alone we are weak,” Bruno said. “But when we bond ourselves together we are strong.”

He told the gathering that the lanterns were symbols of the light within each person, and encouraged the gathering to become “the living hands of healing in this world around us” and to take the lanterns back to their individual houses of worship to shine on Sunday, Sept. 11, and other times as well.

Etched into the glass globes were the symbols of the Abrahamic faiths – Muslims, Christians and Jews, with the ‘hands in healing’ symbol which has characterized Bruno’s ministry, reaching out to one another.

“We need peace,” he said. “We need tranquility. The only way that comes about is if your hands are the hands of Jesus.”

A video report on the event from the Just Action series is here. 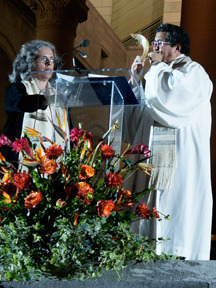 Aviva Rosenbloom, cantor emerita, Temple Israel of Hollywood, and Rabbi Mark Diamond, executive vice president of the Board of Rabbis of Southern California 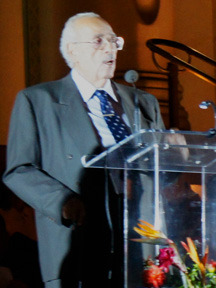