The acclaimed Walt Disney Concert Hall organ roared, purred, wept and rejoiced on June 12 under the hands of six highly accomplished organists who also serve congregations of the Episcopal Diocese of Los Angeles. A brass ensemble and a 200-voice choir joined them for several numbers — and at one point the entire audience rose to sing the hymn “All creatures of our God and King.” 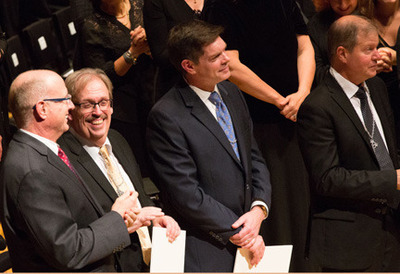 A full house of 2,100 Episcopalians representing congregations throughout the diocese cheered the new canons and their performances at the concert, one of several events marking the 150th year of Episcopal parish ministry in the Los Angeles area. Bob Williams, canon for community relations and historiographer of the diocese, produced the event in cooperation with the six organists, whose church choirs joined together to sing several movements from Messe Solennelle by Louis Vierne and wrap up the evening with “I was glad,” by Charles Parry.

Bruno also presented a certificate of appreciation to organ builder Manuel Rosales, who over the course of many years has built or contributed to instruments in Episcopal churches throughout the Southland. Rosales built the 6,134-pipe Disney Hall organ, nicknamed “Hurricane Mama.” 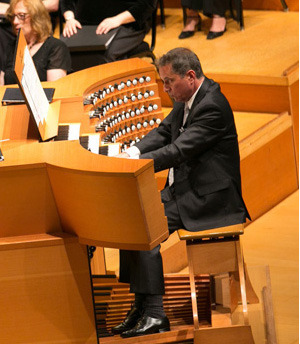 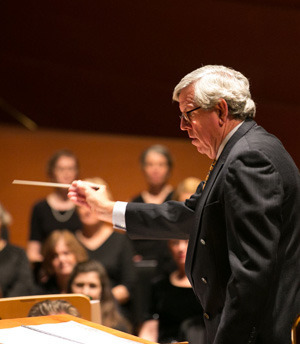 The new canons are:

Canon Philip Smith, conservator of the Walt Disney Concert Hall organ and minister of music and organist at Church of Our Saviour, San Gabriel;

Canon James Walker, director of music and organist-choirmaster at All Saints Church, Pasadena.