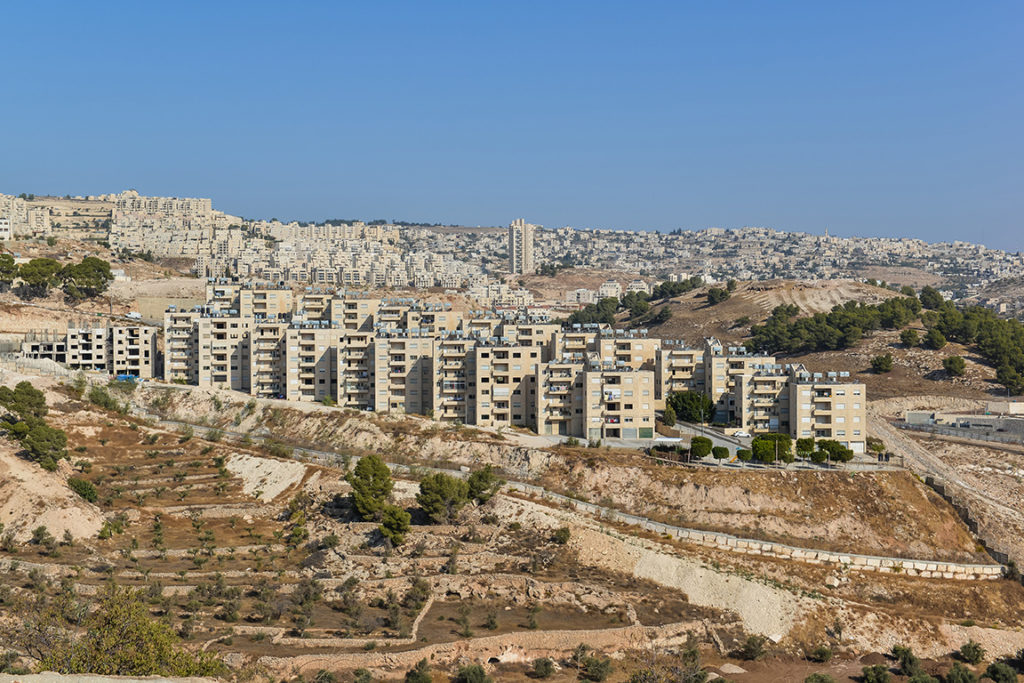 A Jewish settlement is built on a hill in the West Bank near Bethlehem. Photo: Julius Bramanto/Shutterstock

Vivien Sansour lives just footsteps away from the Church of the Nativity in Bethlehem, the oldest site continuously used for worship in Christianity, thought to contain the birthplace of Jesus.

But for Sansour, a former peace and justice director at All Saints Church in Pasadena, and more than 25,000 other Palestinian residents, the ancient city has become more like “an open-air prison where our movement in and out is completely controlled” because of the continued Israeli annexation of their lands.

Even in the time of COVID-19, “We are under quarantine, but the Israeli bulldozers have not stopped working and construction of the wall has continued; the annexation has continued,” Sansour told The Episcopal News during a recent telephone interview from Bethlehem. 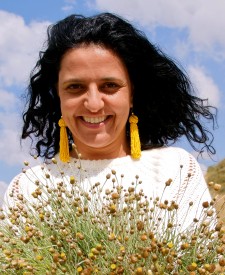 “Even during the quarantine, they’ve finished constructing the wall,” she said. “So, we are severed from the ancient terraces where we cultivate grapes, fruit trees, almonds, and apricots. Farmers often don’t have access to their lands” (see related story here).

Now All Saints, along with the Program Group on Global Partnerships (PGGP) of the Diocese of Los Angeles, is circulating a petition calling upon U.S. congressional leaders to oppose “Israel’s planned annexation of their illegal settlements and much or all of Oslo Area C in the Occupied Palestinian Territories.”

PGGP member and All Saints parishioner Randy Heyn-Lamb told The News he was inspired to write the petition after a December 2019 visit to the West Bank to see friends. He also feared that congressional leaders have been focused on the coronavirus pandemic to the exclusion of other pressing world concerns.

“We visited Bethlehem, Ramallah and Nazareth and with the Christian community there,” he said. “We spent a significant amount of time in what’s considered to be Area C, which could very well be gobbled up in annexation.”

The Diocese of Los Angeles has for some 12 years maintained a companion relationship with the Diocese of Jerusalem and the Middle East. Many Southland Episcopalians have visited the Holy Lands on church-sponsored pilgrimages.

Under the 1993 and 1995 Oslo Accords, the West Bank was divided into three areas; A, B and C. The accords helped to establish the Palestinian Authority, with limited governing power in Areas A and B, and favored a two-state solution in the long-standing Israel-Palestinian conflict.

However, Israel controls the Palestinian economy, as well as civil and security matters in more than 60 percent of the West Bank, designated as Area C. The West Bank is home to about 2.7 million Palestinians and about 391,000 Israeli settlers in 33 cities, including East Jerusalem, Bethlehem, Jericho, Ramallah, Nablus and Hebron.

The Israeli government has continued to expand its settlements in spite of opposition from Palestinians, the United Nations and international human rights groups. According to news reports, Israeli Prime Minister Benjamin Netanyahu has recently pledged to annex parts of Area C — the Jordan Valley and the northern Dead Sea region — where some 65,000 Palestinians and about 11,000 Israeli settlers live.

“With the exception of the Trump Administration, the world sees annexation as a direct violation of international law and conventions,” according to the PGGP petition. “Even if certain states will be cowed into silence and turn a deaf ear to the Palestinians’ call for justice, the United States should not.” 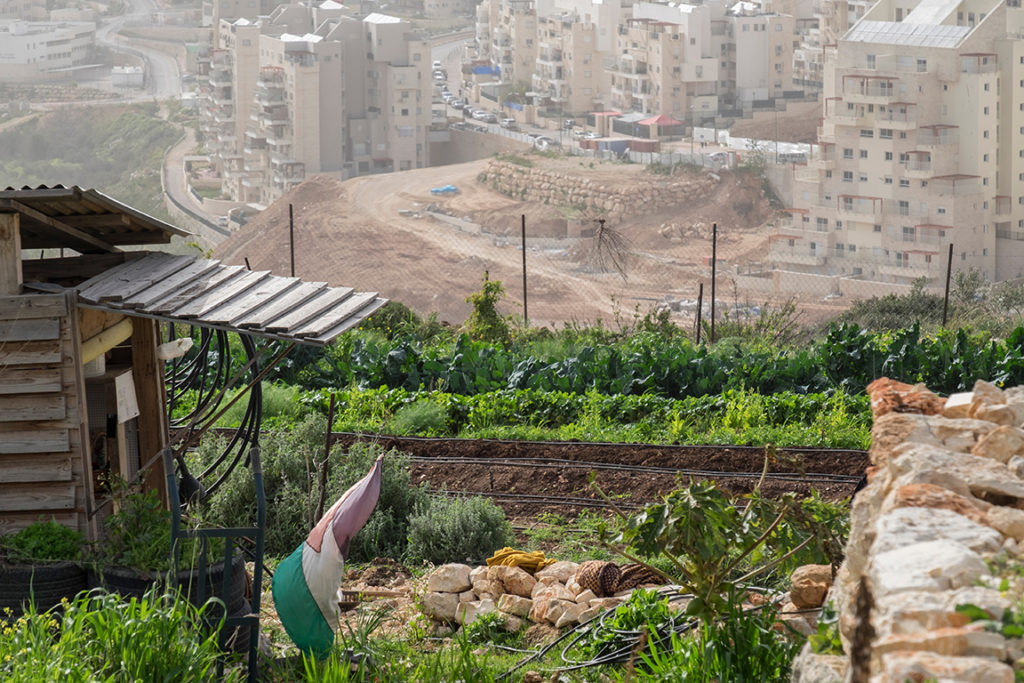 “The crisis in Israel and Palestine is reaching a perilous inflection point,” Bishop John Harvey Taylor of the Diocese of Los Angeles told The News. “Those who promote freedom and security for all in the region are finding less and less ground to stand on as leaders in Jerusalem and Washington methodically undermine the two-state solution. If Israel annexes settlement territory on the West Bank, the next step would be annexing land where Arab Palestinians live. Annexation of territory without giving all residents the immediate right to vote in Israeli elections would be a step down the road to apartheid. I invite all who want peace with justice to speak up for the two-state solution by signing the petition.”

A proposed peace plan, unveiled in January 2020 and brokered by the president’s son-in-law, Jared Kushner, supports continued annexation. It was rejected by Palestinian leadership. As recently as May 13, U.S. Secretary of State Mike Pompeo visited Jerusalem in a show of support for the Israeli government.

The Rev. Mae Elise Cannon, executive director of Churches for Middle East Peace (CMEP) said, “the big concern has been the growth of Israeli settlers in Palestine territories. It has been exponential. There are more than half a million settlers in East Jerusalem and the West Bank.”

CMEP, founded in part by The Episcopal Church 36 years ago, represents 30 Christian denominations. The organization has launched a 48-day campaign, “Churches Against Annexation” because, Cannon said, the Israeli government actions ultimately “will mean the death of the two-state solution.”

Israeli leaders are expected to vote in just over a month — 48 days from the launch of CMEP’s campaign — on the annexation.

“Over the past several weeks we have witnessed, from Washington to Jerusalem, signs laying the groundwork for formal annexation of parts — or all — of Area C in the occupied West Bank by the Israeli government as early as July 1,” according to a CMEP statement.

“Given the Trump Administration’s support, Congress must step up to ensure no U.S. funds are used in the recognition or facilitation of annexation — and for there to be any chance they will, elected officials must hear loudly and clearly from their constituents.”

The organization is hosting a series of webinar discussions featuring Palestinian Christian leaders, beginning at 11 a.m. EST on June 4, 2020.

Cannon said it is critical “that all who support peace and justice in Israel-Palestine use their voices to oppose annexation.”

Heyn-Lamb agreed. He created the petition, he said, “out of a personal sense of wanting to do something for the people of the land and their hopes and dreams.

“If annexation occurs, we don’t know what will happen to their lives and livelihood. There is plenty of settler activity in some of these areas that are approved by Israel and those that are illegal under current Israeli law.”

Art Fisher, a parishioner at Trinity Church in Santa Barbara, who has been circulating news of the PGGP petition, said that supporting it requires only clicking on an internet link at change.org. The continued annexation of Palestinian land is a justice issue that should concern all people of faith, so the petition is directed toward an interfaith audience, he added.

“Unless you visit Palestine, you have no idea of the restrictions there,” he said.” It’s like living in a prison. You can’t go into Jerusalem without a pass, and passes are arbitrarily granted. Like the barrier wall they’re building. It isn’t a fence. It isn’t barbed wire. It is 27 feet of cement, then barbed wire, then electric wire, and then television cameras. It completely controls Palestine. This annexation is further extending this.”

Sansour, who was born in Bethlehem, returned there in 2010 and created the Palestine Heirloom Seed Library. It is an effort to recover and to cultivate vegetable and fruit seeds to prevent lush farmland from becoming wasteland and “to give us the power to continue to grow our own food,” she said.

She is grateful for the support of Heyn-Lamb and others.

“I have no commitment to nationalism,” she said. “But I am a human being, and I am someone who believes in the teachings of Jesus. In a lot of ways, we are the offspring of Jesus’s revolutionary tradition. He came with a vision, that there should be enough for everybody.

“You can’t be sitting in California and not understand that what you choose to do, how you choose to vote, who you choose to vote for, how you express your political opinions, is of the utmost relevance. It impacts my life right here, and thousands of other people, who are literally struggling to drink a sip of water or to water a plant or to harvest a tree, which should be the most basic human right.

“Our only crime is that we are here,” she said. “We live here. We were born here. We have a very deep relationship with this land.”