A labor of love, an issue of justice: Vivien Sansour protects Palestine’s seeds 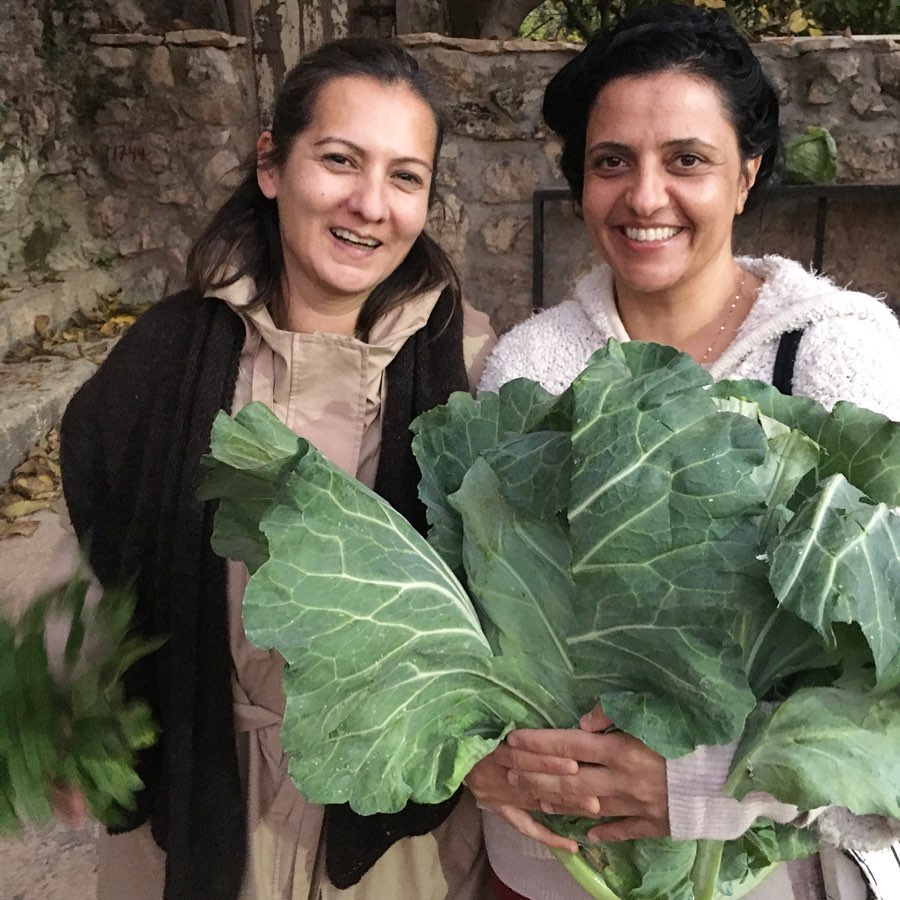 Vivien Sansour, right, and a friend harvest cabbages at a farm in Battir, a Palestinian village in the West Bank.

Vivien Sansour doesn’t have to imagine it. She and other Palestinians, whose ancestors have tended grapes, almonds, apricots, wheat, barley, dates and other crops in the West Bank’s lush Jordan Valley for centuries, are living it.

Now the former parishioner and peace and justice director at All Saints Episcopal Church in Pasadena fears that continued Israeli land annexation and agribusiness will turn once self-sufficient farmers into day laborers, and Palestine’s ancient bread basket into wasteland.

But daily she also imagines a different reality. She works to reclaim and reintroduce ancient fruit and vegetable seeds threatened with extinction as part of the Palestinian Heirloom Seed Library she created when she returned from California to her Bethlehem homeland a decade ago.

For Sansour it is both a labor of love and an issue of justice.

“I have been working on four particular heirloom varieties recently; tomatoes, watermelon, ancient wheat, zucchini. The heart of my work is not just conserving the seed itself, but the system and practices around it,” Sansour told The Episcopal News in a recent telephone interview from Bethlehem.

Growing up with her grandmother, she learned to love the land, and about native plants, able to thrive without irrigation. “They grow and live off the moisture in the soil from the rainy season and require no irrigation,” she said.

“If you walk with any farmer, you will understand, we know every rock,” she said. “Some trees, we have names for them. This is not just property or real estate for us. We don’t live with nature as something separate. We believe we are part of nature.”

Without these native plants, farmers must depend on irrigation, and access to the water is controlled by the Israeli government.

“It is relevant to Area C, where most Palestinians cultivate land,” Sansour said. Under the 1993 and 1995 Oslo Accords, the West Bank was divided into Areas, A, B and C. The accords helped to establish the Palestinian Authority, with limited governing power in Areas A and B, and favored a two-state solution in the long-standing Israeli-Palestinian conflict.

However, Israel controls the Palestinian economy, and civil and security matters in more than 60 percent of the West Bank, designated as Area C. The West Bank is home to about 2.7 million Palestinians and more than 500,000 Israeli settlers in 33 cities, including East Jerusalem, Bethlehem, Jericho, Ramallah, Nablus and Hebron.

The Israeli government has continued to expand its settlements, in spite of opposition from Palestinians, the United Nations and international human rights groups. According to news reports, Israeli Prime Minister Benjamin Netanyahu has recently pledged to annex parts of Area C — the Jordan Valley and the northern Dead Sea region, where some 65,000 Palestinians and about 11,000 Israeli settlers live.  Since returning home, Sansour has waged a steady battle for justice, and not just for Palestine. “This is an issue all over the world, when indigenous communities that have developed seed varieties over millennia are losing these varieties.”

A proposed peace plan, unveiled in January 2020, and brokered by the president’s son-in-law, Jared Kushner, supports continued annexation. It was rejected by Palestinian leadership. As recently as May 13, U.S. Secretary of State Mike Pompeo visited Jerusalem in a show of support for the Israeli government.

Sansour fears that if approved, the annexation will result in further land, water and personal restrictions.

Farmers are prevented from building sheds with permanent roofs, she said. Water access is interrupted. “You cannot access water that runs even from the spring on your property. The village of Auja has a stream, but the Israel water company has locked the access to it,” she said.

“Sometimes you can go plant trees, and the army will come and say it is illegal and will uproot your trees,” she said. “If you want to go harvest your olives, they will say it is a military zone. If you build a shed — which any farmer knows when you have rugged terrain, you need a place to store things — they demolish it.”

Nearby, she said, the military demolished a Palestinian-owned structure, then allowed Israeli settlers to build on the same site.

“I have witnessed at least 30 farmers I know who have lost their land or access to their land,” Sansour said. “One farmer in particular lost over 65 apricot and olive trees from his grove. I’ve seen them literally uprooted and destroyed.”

As the settlements have continued to expand, “even little trails where we used to walk, we can no longer walk. I used to walk my sister’s dog … but we can longer go there because there’s a settler there and he brought a lot of animals in the area where we had our fruit trees. Our space to breathe, or to have green space has shrunk so significantly. If I wanted to just go and take a long walk, those places are almost gone.”

With cities “starting to look more and more like refugee camps, like ghettos, the only place to go is up,” she said. “People are building on top of each other. And we’re forced to build on top of our own food, too.”

She created the library after witnessing “farmers whose farms are deserts. They went from being the very lush breadbasket for all of the West Bank to now desert and these farmers, instead of being independent entities, became day laborers in Israeli settlements.”

The library, she said, “is not an institution with closed doors. This is a community activity with people who want to do this work with me. There is no agenda, but my love and passion and belief that it is important.”

She searches for ancient plants and salvages the seeds, recognizing the urgency of reproducing and disseminating them.

“The idea is to bring biodiversity back to the field, back to the market, back to our kitchens, back to the dinner table, back to the world,” she said. “Wheat and barley developed here. When the first humans started cultivating wheat, it took the imagination of someone, a farmer, who said I’ll take this wild grass and develop it, until we have the wheat we have today.”

Imagining a more just world, she relies on hope and faith.

“I used to be angry, but I have come to a place where I feel more compassion, and just sadness and understanding that this is obviously the failure of our human imagination to give young people a vision bigger than we have done.”

It’s a vision of stewardship as well, she says. “This violence is being done to the earth as well. It should concern people, not just because it’s Palestine, but around the world as a Christian community, as people who care and have been given the earth and responsibility to be good stewards. We’re coming to see this more and more as we face climate change and crises in the world as obviously facing, like the pandemic.”

She adds: “As Christians and as any indigenous community, we need the support of our brothers and sisters. We depend on them and we call on them and we hope that they will be with us in holding the responsibility and the ability to fight for justice.”